The feature race in Japan on Sunday is the Grade 1 Osaka Hai (2000m), to be run at Hanshin Racecourse at 4.40pm AEST on Sky Racing1.

Masahiro Otake, trainer
“In last year’s race as the favorite, he got well back and the slow pace didn’t suit him. I also think we worried a bit too much about his weight last year. In his latest race it was good to get a result and I was pleased about that after his trip overseas. In recent training, particularly since two weeks ago, he’s been spot on. I think his best distance is 2,000 meters. He’ll transport over on the Saturday and he should be about the same weight as he was for his last race. I don’t look at it like revenge for last year, but just want him to run his best and the jockey knows how to do that.”

Yuga Kawada, jockey
“It was good to win last time and I was relieved about that. He also won the Sapporo Kinen well. The distance this time is probably his best. The gate and the way the race is run will be different, so I need to give that some thought. He’s at the point now where I think he can get another good result in a Japanese Grade 1.”

Kazuya Nakatake, trainer
“The horse looks great and is in good condition. He’ll be suited to the track with the rise. I’m interested to see what he can do with the condition he’s in.”

Koichi Shirakura, assistant trainer
“A Grade 1 is never easy, but he’s a capable horse. With his footwork, the best is for him to save as much as he can throughout the run. I’m looking forward to what he might produce here.” 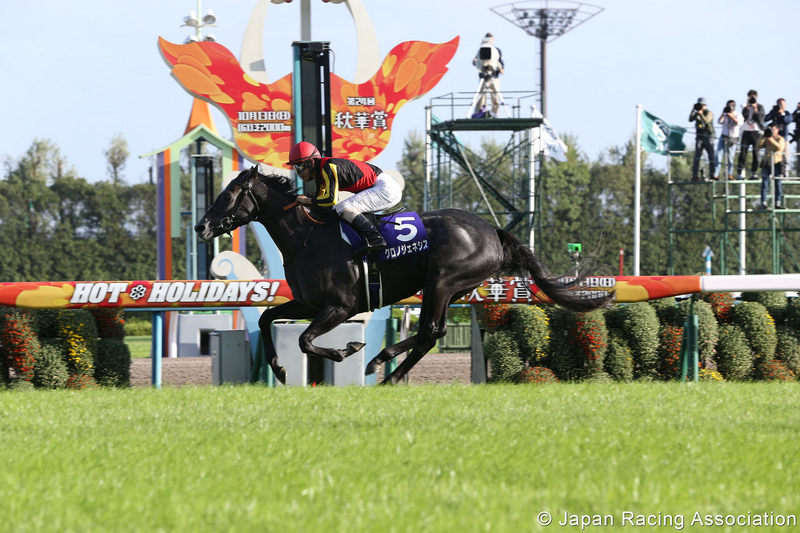 Takashi Saito, trainer
“Now she’s older, she’s developed more and is stronger. It’s noticeable compared to last year. In training she’s done well and posted good times, but with her last piece of work we just concentrated on the finish. Her movement’s fine. The inner course at Hanshin won’t be a problem, and it’ll be interesting to see what she can do against the male horses.”

Yuichi Kitamura, jockey
“To be honest, I don’t know how she’ll measure up against the Grade 1 male horses until it happens. One of the key things with her is to keep her relaxed. She’s shown her strength in training and her weight and body shape match up. I’m privileged to ride her and want to get the best out of her here.”

Kiyoshi Hagiwara, trainer
“I think he’s come on well since his last race, and that was his first run for a while. In training he’s been moving well and his times have been faster than I expected, so he’ll have done enough going into the race. He’s in good physical shape. It’ll be his first time at Hanshin and this time the distance is 2,000 meters, as well as it being a strong field, so it’s important that all goes right. He’s about 462 kg now. I want to transport him over early and get him settled in, so hopefully he won’t lose too much weight.”

Noriyuki Hori, trainer
“He returned from Northern Farm Shigaraki as planned, but I wasn’t sure if I’d run him in this race. On the 19th his time in training was not so fast, but on the 24th his body weight was 500 kg, the same as his last race. He’ll have to travel over to Hanshin and might lose a bit of weight, but I think in all, his condition is now better than it was for his last run.”

Yuki Uehara, assistant trainer
“He’s worked well in training and mentally he’s improved. He’s had good results over 2,000 meters and the Hanshin course will be fine for a son of Deep Impact. He should be able to sustain a good run to the end. The jockey often rides for the stable and communicates well with the trainer.”

Haruki Sugiyama, trainer
“He can get a little worked up, and that was the case in his last race when he lost a bit at the start. All being well though, if he jumps smartly and gets into a good rhythm, he’s capable of running a big race. I’ll leave things to the jockey.”

Yutaka Take, jockey
“He seems a different horse now and I’m surprised at how strong he is. I’d like him to be a little more relaxed and that will be the key. Other than that, I think he’s a smart horse that can race from any position.”

Mikio Matsunaga, trainer
“After coming back from overseas, she has regained her condition and put on 11 kg. In her last race she ran pretty well and she will definitely improve for that. She’s done well in training and I’m not anxious about anything. She’s a horse that’s had success afterall. The Hanshin 2,000 meters doesn’t pose any problems, and she’s good enough to take on and run well against the male horses. It’ll be the second time for the jockey (Mirco Demuro) to ride her and I think he can ride her well.”

Yasuo Tomomichi, trainer
“He doesn’t seem any less powerful than when he was a 3 or 4-year-old. He’s pleased me in training and his times have been good enough. I think distances between 2,000 and 2,400 meters are ideal for him, and he’s talented enough to handle the inside course at Hanshin. There wasn’t much in it in last year’s race, and just to give another new dimension to things, Lyle Hewitson will ride him.”

Yoshitada Takahashi, trainer
“He wasn’t so good in the gate last time, but hopefully that problem has been solved. He should be in good enough condition going into this race, and even though the opposition are strong Grade 1 horses, I’m looking forward to his run against them.”

Kenichi Nakatsuka, assistant trainer
“He’s been closing off well in training and his balance is good. He seems in better shape than he was for his last race, and overall he’s in very good condition.”

Noriyuki Hori, trainer
“Since last autumn, jockey Christophe Soumillon suggested putting blinkers on the horse, and he has run with more concentration since then, so he will wear blinkers this time too. There’s only been a short time between races, so he’s been at the stable. There’s no big change in his condition, and although it’s a strong field, I think he’ll be going into it in good shape and hopefully show the power he has.”

Yuki Uehara, assistant trainer
“He has done well in the period after his last race, and while we haven’t pushed him too hard, he’s running straight and doing enough. There’s no tiredness after his last race. He’s a horse with potential, as he showed last time in a Grade 2. The jockey last time said the horse is fine with the blinkers. He’ll transport over on Friday and get settled in at Hanshin. It’s to be hoped that he’ll maintain his weight before the race.”

Yoshito Yahagi, trainer
“His training load has been enough and the horse has been showing us that he’s coming on nicely.”

Shunsuke Fujita, assistant trainer
“He’s trained well uphill and his movement’s been good. His race jockey has been putting him through his paces. He didn’t run so well last year, but with his condition now, and if he gets to run his own race, it’ll be interesting to see what he might do here.”

Yasuo Tomomichi, trainer
“There’s a really fresh feel to him, and that’s how I wanted things to be so that we could aim him at this race. It’s been good to see him get things right in training, and his responses and breathing have been great. He’s in really good condition and I’m expecting him to run a big race.”

Yuichi Fukunaga, jockey
“He’s always been a horse with a lot of potential. He hasn’t had so many races, so he always feels fresh and relaxed. He gave me a win in the Derby and he deserves another Grade 1 win. He doesn’t always get off to a quick start, but I want him to start well and find his rhythm. A gate which gives me some flexibility would be good. I want to ride him with my best ability to get a result that matches the good condition he’s in.”