Irish-bred galloper Orderofthegarter has earned a start in the $5 million Group 1 Caulfield Cup (2400m) with his maiden Australian win at Caulfield.

Saturday’s victory in the $160,000 Group 3 MRC Foundation Cup (2000m) provided Orderofthegarter a ballot exemption for the Caulfield Cup on October 17.

Orderofthegarter is a member of the Lloyd and Nick Williams ownership group and was having his fourth Australian start on Saturday.

After finishing second at Flemington in September 2018, Orderofthegarter spent just shy of two years away from the race track while also being transferred to Danny O’Brien.

The son of Galileo (IRE) finished second in two lead-up races before his breakthrough win on Saturday.

Orderofthegarter provided O’Brien with a winning treble after success with From Within and Fabric earlier in the program.

Heavily backed and well ridden by Damien Oliver, Orderofthegarter, the $3 favourite, recorded a three-quarter length win from Chapada ($26) with Steel Prince ($10) a short-head away third.

Oliver had Orderofthegarter well positioned in a trailing position before issuing a challenge shortly after turning for home.

Last start Caulfield winner In Good Health gave a strong kick early in the straight but Oliver got to work on Orderofthegarter and took over inside the final 200m before holding off the late challenges of Chapada and Steel Prince.

Orderofthegarter drops to 50kg in the Caulfield Cup, but is eligible for a rehandicap. 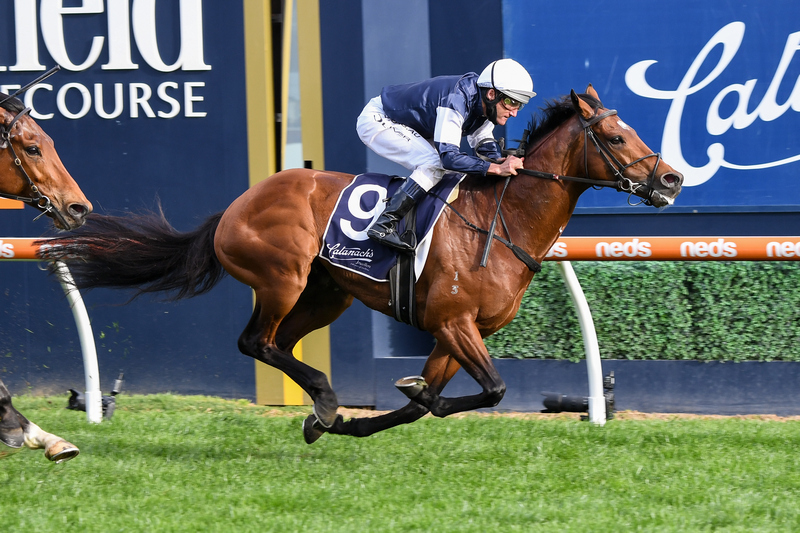 TAB reacted to the victory shortening Orderofthegarter from $21 to $15 for the Caulfield Cup and from $51 to $26 for the Melbourne Cup.

O’Brien said there was still improvement to come from Orderofthegarter ahead of the Caulfield Cup next time out.

“He came to us very well,” O’Brien said.

“He’d obviously had a decent break but he came to us sound and fit and we’ve built him up from scratch.

“He’s a lovely horse, a good-looking son of Galileo, very genuine. He tries really hard every time you send him out there.”

O’Brien said he would need to talk over potential jockeys for Orderofthegarter with Lloyd and Nick Williams as the horses is weighted outside of Oliver’s range.

"I know Daniel Moor has been riding him in all of his gallops and he declared him in this race about ten days ago after he worked with King Of Leogrance on the course proper,” O’Brien said.

“He’d certainly put his hand up to get down to 50-kilos.

“We’re very lucky to be getting these horses (from the WIlliams family). World class horses, beautifully bred and it’s all clicking at the moment.”

Oliver said Orderofthegarter cannot be underestimated in the Caulfield Cup with his lightweight.

“To get into a Caulfield Cup, a horse of his ability with only 50 kilos, he’s going to be a second to none chance,” Oliver said.

“He can travel a little bit keen but we wanted to use the barrier today and the first 400 (metres) there were probably a few of us vying, it just made him a little bit keen, but I didn’t want to be handing up too much so I had to maintain a prominent position.

“You’ve got to remember that it was only his third run in two years, so he’s still got improvement to come.”