The opening meeting of the 2021 Dubai World Cup Carnival at Meydan on Thursday evening is a mouth watering seven race card sponsored by Pillar Partners Azizi Developments and highlighted by the Group 2 Al Maktoum Challenge R1, as well as the Group 2 Al Fahidi Fort and Group 2 Singspiel Stakes on what is a cracking curtain raiser to the international extravaganza.

The official feature on the card, the dirt highlight is the 1600m Group 2 Al Maktoum Challenge R1 sponsored by Mina By Azizi, has attracted a field of 11, all bar two representing trainers permanently based in the UAE.

One exception is Godolphin’s dirt debutant, Gifts Of Gold, representing the pairing of Saeed bin Suroor and Frankie Dettori who have already combined to win the race, inaugurated in 1994, on four occasions. Those four are a record for a jockey in this race whereas Bin Suroor is actually seeking a ninth triumph in the contest and is by far the most successful trainer in its history, although Shuruq in 2014 was his most recent winner.

Bin Suroor said: “We are basically taking a chance with Gifts Of Gold on a new surface and dropping him in trip. We hope he will handle the surface because he is a big, strong, versatile type who, if the dirt experiment does not work out, could go for something like the Al Rashidiya back on turf.”

The only international challenger is Uruguayan dirt Grade One winner Ajuste Fiscal, a first UAE runner for trainer Antonio Cintra since 2010, the first season of racing at Meydan. The handler does have two previous UAE victories to his name and said: “It is great to be back and part of the carnival again. This is the best of the horses I have here this year and is very good on dirt.

“The trip will be a minimum for him, but the second and third rounds are over further and will suit him better.”

In the long, illustrious, history of the race only Le Bernardin has won it twice, successfully defending his crown in 2017, and Kimbear will try and emulate him for Doug Watson on what will be his seasonal debut.

Watson, who also saddles Thegreatcollection, winner of the Listed Dubai Creek Mile over course and distance on his latest start, said: “Both are in good shape at home. Obviously Thegreatcollection has the advantage of two runs under his belt whereas Kimbear does not, but we think both will run well.”

Like Watson, Satish Seemar is seeking a third success in the race, following Surfer in 2015 and North America two years ago. He saddles three and said: “Quip, we think, is our best chance and we hope can show his true form this season, his first with us.

“Emblem Storm is working very well and Roman Rosso is a nice horse who can also run well.”

Salem bin Ghadayer won the race in 2018 with Heavy Metal and relies on his 2019 Group 1 2000m Al Maktoum Challenge R3 winner Capezzano this year. A course and distance winner four times, he was third to Thegreatcollection on his return to action in the Dubai Creek Mile.

Bin Ghadayer said: “We were very pleased with his return under a penalty and should build on that, but having said that this is a tough race.”
Seasonal debutant Military Law represents Musabbeh Al Mheiri who said: “The 1600m is a good starting point, but he is better over further as we saw when he was second in both the 1900m second round and 2000m third round last year.

The joint turf highlight, the Group 2 Al Fahidi Fort sponsored by Creek Views By Azizi, looks likely to be dominated by the Godolphin trainers who are responsible for six of the ten runners between them.

Saeed bin Suroor saddles Final Song, Silver Line and Land Of Legends, the last named the mount of Frankie Dettori suggesting he is the main hope.

However, fellow Godolphin handler, Charlie Appleby, has a superb record in this particular race, saddling the winner in each season bar one since 2015.

They are joined by the exciting Velorum with William Buick seemingly preferring Glorious Journey, James Doyle siding with D’Bai which leaves Mickael Barzalona the plum spare ride on Velorum.

Appleby said: “All three are course and distance winners who seem to prefer 1400m. It is a lovely situation to be in with three genuine contenders in such an important race.”

If Charlie Appleby has dominated the Al Fahidi Fort in recent times, Saeed bin Suroor can claim the same in the Group 2 Singspiel Stakes sponsored by Riviera By Azizi, winning the 1800m turf feature, inaugurated in 2012, five times in all and in each of the past three years.

Benbatl landed the prize 12 months ago, regaining the crown he first won in 2018. Sandwiched in between was the victory of stable companion Dream Castle who will hope to emulate his illustrious stablemate by winning the race a second time. He was a late non-runner last year.

Pat Cosgrave partners Dream Castle with Frankie Dettori aboard Bin Suroor’s second runner, Military March, one of two 4-year-olds in the race and not seen in public since an excellent fourth in the 2000 Guineas before a setback sadly ruled him out of the Epsom Derby.

Bin Suroor said: “The race has been very kind to us, especially recently, and we have two good chances this time. Dream Castle loves racing in Dubai and just seems to come to life in the sunshine.

“He is in great form as is Military March, a lot less experienced horse, but a very smart one. Both should run well in what looks a strong renewal.”
Appleby saddles three with William Buick’s mount, Zakouski, winner of last year’s 1600m Group 2 Zabeel Mile, seemingly holding the strongest claims.
Appleby said: “Zakouski was very progressive at the carnival last year and won his second start back in the UK. That was his latest appearance, at the end of October, after which we put him away with this race in mind.”

Rest of the card highlighted by Dubawi Stakes & Dubai Dash

There are also two interesting sprints on the card, headed by, on dirt, the 1200m Group 3 Dubawi Stakes sponsored by Park Avenue by Azizi. Nine have been declared, eight trained locally and the unbeaten Upper Class for Uruguay and Antonio Cintra.

Winner of all four career starts, as the only 3-year-old in the field he gets an allowance and Cintra said: “He is a nice, young, sprinter and has not been beaten yet. The allowance is handy and we are starting him on dirt although his pedigree suggests turf will suit in the future.”

On turf, 15 have been declared for the 1000m Dubai Dash sponsored by Aura By Azizi, headed by last year’s winner Equilateral who on that occasion sported the silks of his breeder, Prince Khalid Abdullah, who sadly died last week. This 6-year-old Equiano gelding had actually changed hands in the summer, but now owned by Fitriani Hay, remains in the care of Charlie Hills.

The first race meeting of the Dubai World Cup Carnival 2021 also marks the reopening of Parade Ring Restaurant, where only horse connections who do not have a runner on the night, will be hosted, offering them the opportunity to watch top-class contests and experience fine hospitality at one of Meydan Grandstand’s most popular restaurants. 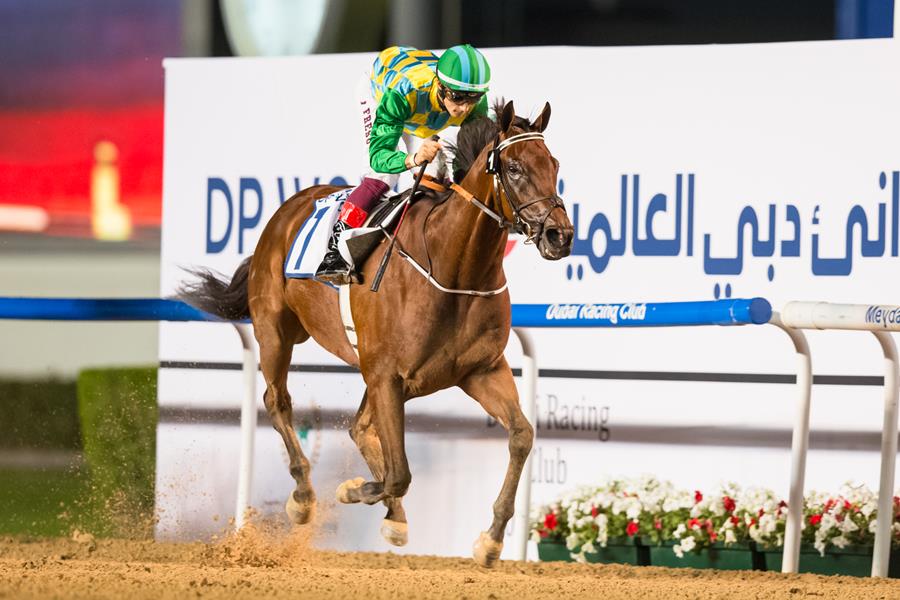