Trainer Jason Ong could have given himself a pat on the back, or praised the jockey or horse himself after smokie Limited Edition smashed his way back to the winner’s circle at Kranji on Saturday, but directed the kudos to the vet instead.

The Singaporean handler said Singapore Turf Club veterinary surgeon Dr Dan Shaw has shown a great deal of patience and dedication in bringing the Perfectly Ready seven-year-old back to his best, with the first-up victory the icing on the cake.

Unseen since May when he finished midfield to Wealth Elite in Class 4 company, the previous two-time winner (both over 1200m on turf) was contesting the $50,000 Class 4 race over 1200m on Polytrack. 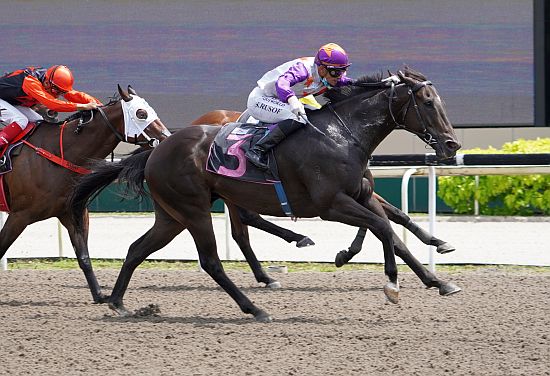 If the switch in surface and cobwebs could have been sources of concern, they were quickly set aside when Limited Edition came off a smothered run in midfield to go and rack his rivals up inside the last furlong.

Race-leader Crystal Warrior (Manoel Nunes) looked to have the race in his keeping when he shook Magnifique (Saifudin Ismail) off, but was immediately set upon by a bunch of chasers headed by Renzo (A’Isisuhairi Kasim) and Universal Empire (Koh Teck Huat).

A few lengths astern, Shafiq Rizuan had bided his time to a tee. Once Limited Edition ($110) was peeled into the open air on the outside, there were no prizes for guessing where the thicker end of the prizemoney was heading.

Limited Edition went on to score a soft win with half-a-length to spare from Universal Empire for a stable quinella. Renzo had every chance but had to settle for third place another half-length away. The winning time was 1min 11.79secs for the Polytrack 1200m.

“After the horse ran a disappointing race in May last year, we realised he was not right. He was very sore,” said Ong.

“He did a bone scan and all his four fetlocks had problems. No surgery was required, but just long breaks, and Dan did a lot of work on him.

“He was very attentive to the horse, and would come by to check on him very often. To me, Dan doesn’t get enough credit for his fantastic work at the Club.

“Credit to his New Zealand owner Alan Young as well, as he’s been very patient, and left it to us to look after his horse’s best interests.

“He trialled (third) very well behind Katak a couple of weeks ago (January 11). That’s when I knew he was in the right form.”

“With Universal Empire running second, it was an even better result for the stable!”

Limited Edition has now established a record of three wins and six placings from 20 starts for prizemoney in excess of $130,000 for connections.