The Paul Vogt-owned eight-year-old produced a fantastic performance from the front to defy top weight in the feature 3m1f handicap chase at his favourite track on Saturday, with Nicholls describing the experience of winning a big race at a crowdless Cheltenham as “surreal”. 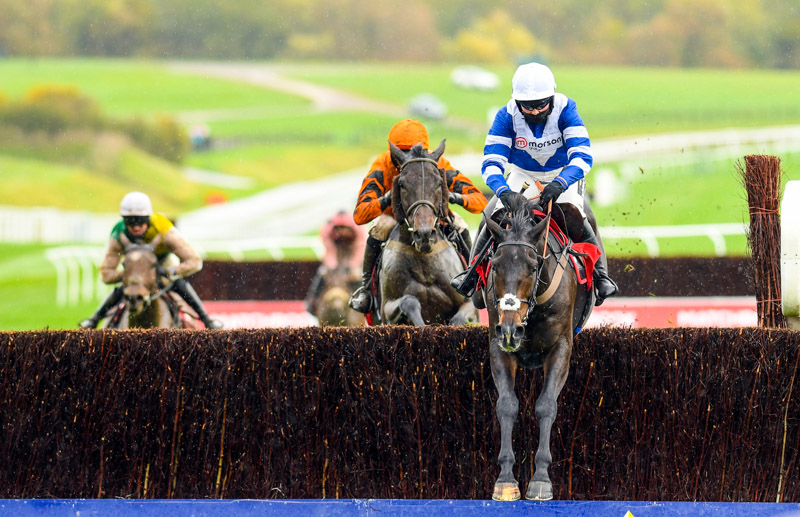 Frodon and Bryony Frost in the lead, photo Bill Selwyn

The Paddy Power Cotswold Chase is among options for Frodon en route to the festival showpiece in March, for which he is a 25-1 shot.

Reflecting on the big win, Nicholls said: “It was a surreal experience and you can only imagine the roar he would have received from a big crowd. It would have been uplifting for everyone, but at least we're racing and we have to make the most of it.

“It was a sensational performance and I wasn’t expecting anything like that so early in the season. There’s lots of room for improvement to come from him and that’s the exciting thing.

"He loves Cheltenham and the Ryanair is probably a bit sharp for him now, so the Gold Cup would be ideal. If he just keeps improving, you could see him running a huge race and into the frame.

“I’m not saying he’s going to go and win the Gold Cup – there are some horses who are probably better than him about – but a horse as tough and genuine as him who can jump around Cheltenham like he does cannot be discounted.”

For Frost in the saddle it was another memorable day aboard Frodon, on whom she has won seven races from 14 runs, and she hopes the public enjoyed it from the comfort of home.

Frost said: “It was a different experience but I’m sure his fans at home were screaming at the telly and the dogs were running round the sitting room! I hope everyone was jumping up and down on their sofas.

“He has a big fan base because of the way he goes about it and the way he jumps. He’s everything that jump racing is about – he shows his enthusiasm and loves it. Every pair of hands that were there yesterday gave him a clap at some point as he walked back into the winner’s enclosure. To be associated with a horse who is so fondly loved by so many is really cool.”

Frodon is doted on by groom Michelle Kramer, ridden every day by Holley Evans and is among the most popular horses at the yard.

His tenacity on the track gains him an ever-growing fan base, but it is also his unique character that resonates with Nicholls' staff.

Nicholls said: “He’s a real character and takes plenty of grass. You know when he’s right as you can be working him hard and whenever he pulls up he’s always playing Jack the Lad. He’s permanently squealing when you lead him anywhere and tries to set the string off. He enjoys life.

“He was even squealing after he was tested in the veterinary box following the race. He’s an astonishing horse and one in a million.

“He uplifts everybody, especially in times like this, and in particular for jump racing in general. He’s what it’s all about. He jumps brilliantly and is tough and genuine, and that’s what people like.

"People follow the sport for days like that, so it was a shame the public wasn’t there, but I’m sure loads of people enjoyed it on the television and that’s good for racing.”