Olivier Peslier is delighted to be on "super horse" Stradivarius in the Qatar Prix de l'Arc de Triomphe at Longchamp next Sunday. 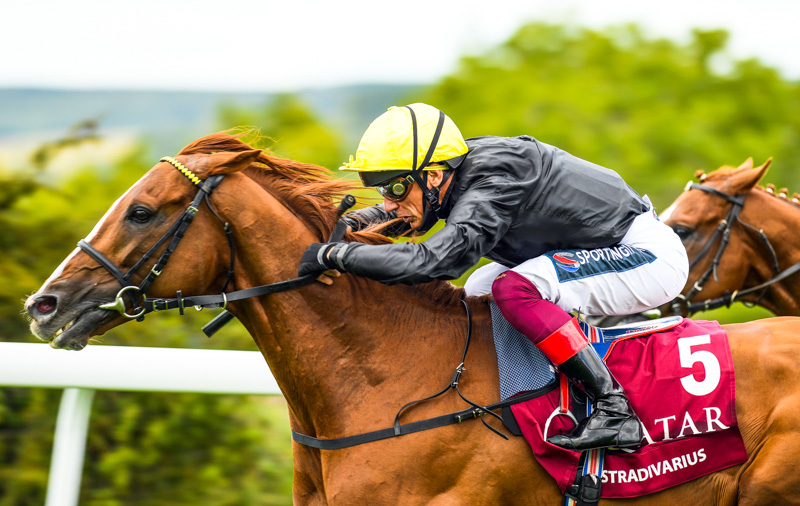 "It's wonderful," Peslier said. "He's a super horse, strong and a famous stayer. I'm very happy to be on him.

"I think he will be very good in the Arc because there's a lot of rain in Paris and that will be a big help for him. He's a strong horse who just gallops. He's a real champion.

"I watched him last time at Longchamp. John Gosden is a champion trainer and I know the horse will be 100 per cent in the Arc."

The top-class stayer, who finished a close second when dropped back to the Arc trip on his prep run in the Prix Foy, can be backed at 14-1 for Sunday's race.

Explaining the choice of jockey, Gosden said: "After discussions with Mr Nielsen we have decided to book Olivier Peslier for the ride.

"Obviously his course knowledge is second to none and we think he's the right fit for the horse."

Peslier, 47, won the Arc three times in a row from 1996 to 1998 on Helissio, Peintre Celebre and Sagamix before a memorable victory in 2012 on Solemia, whose late thrust broke Japanese hearts when the brilliant but quirky Orfevre faltered late on.

A Nielsen homebred, Stradivarius has been Britain's best stayer for the last three years, landing a hat-trick of Gold Cups at Royal Ascot, which formed part of a £1 million bonus he landed in 2018 and 2019.

His other top-level successes include four Goodwood Cups, although he has twice been beaten when dropping back to the Arc distance of a mile and a half this season, the latest being his course second to Anthony Van Dyck in the Prix Foy under Dettori.

Nielsen has longed for a crack at the Arc and was far from deflated following that effort, saying at the time: "I wouldn't be put off for the Arc by the way he ran today and the pace of an Arc would suit better."

Andrea Atzeni had been suggested as a possible option for Stradivarius, the pair having teamed up to win the Goodwood Cup in 2017 and 2018.

Current quarantine rules mean Atzeni will remain in Britain to be available to ride for his retainer, Sheikh Mohammed Obaid Al Maktoum, at Newmarket's Dubai Future Champions meeting on October 9-10.

Jockeys returning to Britain after riding in France have to quarantine for eight days but Oisin Murphy said efforts were being made to get that restriction relaxed.

He told Sky Sports Racing: "Ryan Moore and Frankie Dettori have been lobbying to get dispensation like professional footballers, that if they passed a certain amount of Covid-19 tests leading up to next weekend and after the weekend, and they flew privately and came into contact with literally nobody, would it be possible not to participate in the quarantine?

"We don't have a firm answer yet but we're certainly hopeful and it would be fantastic if we were granted that privilege because I feel like we wouldn't be putting anybody at risk."