The evergreen talents of Damien Oliver were very much again in evidence when the celebrated veteran hoop lifted Cafe Rizu (by Rubick) to victory in the $135,000 VRC Grinders Coffee Roasters Plate (1800m) at Flemington in Melbourne.

Appearing comfortably in control leading the small field into the straight, Flinders River and Frankie Two Angels quickly came under pressure thereafter, with the ultimate winner Cafe Rizu produced on their outside and subsequent runner-up Reuber (by Dissident) gaining an advantageous run up the rail.

Just as it seemed likely that the inside passage gained by Reuber would win it the race, Cafe Rizu found again under an expertly timed ride by Oliver to gain the lead close to home and score by a very narrow margin.

$3.90 race favourite Flinders River battled on gamely for third after attempting to make all the running with top-weight of 62kg, albeit minus the 3kg claim of apprentice rider Will Price.

Cafe Rizu is trained by Mick Price & Michael Kent Jnr and was one of four last-start winners in the field. 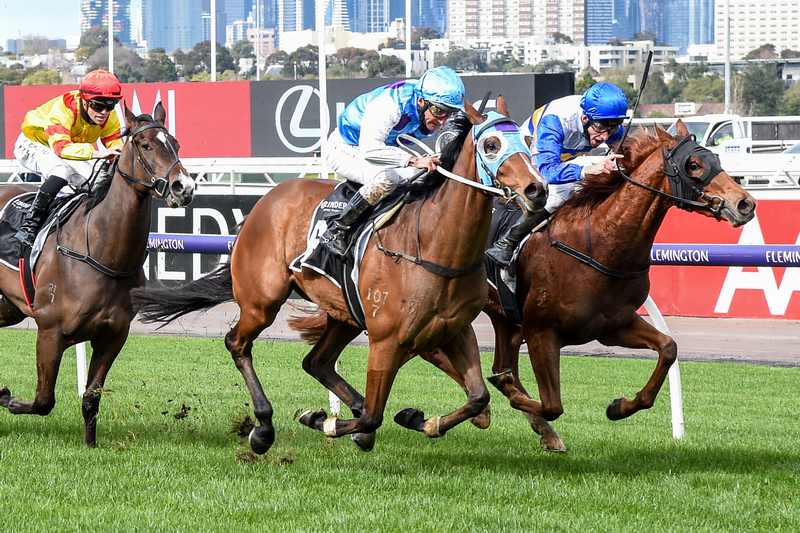 Speaking after his second winning ride of the day, Oliver suggested that Cafe Rizu's staying bloodlines made the difference in the finish and that the filly had put the writing on the wall when scoring at her previous outing.

“She certainly threw more to the Zabeel [dam]side than Rubick,” said Oliver.

“I rode her first-up and I thought [said] to Mick sometimes these… early season mile-to-1800m races can be a little bit thin, and after riding her first-up I thought she was going to love a mile or further.

“Any time a two-year-old can beat the older horses in a maiden shows a bit of merit to their form,” Oliver concluded.

“It worked out as we’d hoped. Good staying effort in testing conditions. The filly is going really well.”

Kent indicated that there was no firm plan for Cafe Rizu and that the stable was just happy to win a “lovely race” at Flemington with the filly.

Official distances of the race were a Short Neck x 1½L.

A maternal grand-daughter of Zabeel, Cafe Rizu was produced by the multiple Group-placed 3-time winner Calm Smytzer whose very notable form included third in the Group 1 Ansett Australia Stakes at Rosehill Gardens as a 3-year-old.