The Hawkes’ and Berry combination with Ole Kirk won the $1m, Group 1 De Bortoli Wines Golden Rose (1400m) at Rosehill on Saturday with the stable taking the quinella for good measure with North Pacific second with a head margin separating the pair.

Jim Bryne took Rothfire to the lead from the barriers fighting off a bid by Mamaragan and Nash Rawiller to come through inside them. Across the top Rothfire was in control followed by Mamargan and Yardstick and when Byrne put the foot down passing the 400m they were 2L clear of the chasing pack.

They were still leading with 200m to run, but by that time there was a line up behind. Berry had to switch tracks to extract Ole Kirk from a dead end passage, however once they were out and clear his colt extended immediately. North Pacific and James McDonald were outside and together they descended on Rothfire with 125m to run.

The two colts then went stride for stride with North Pacific seemingly heading Ole Kirk inside him, but then the latter gained the supremacy again for the narrow win.

North Pacific (Brazen Beau) and McDonald were clear of a notably closing King’s Legacy (Redoute’s Choice) and Hugh Bowman with Rothfire fourth, the margin 1 1/4L away. After the race Rothfire was reported to be three out five lame. 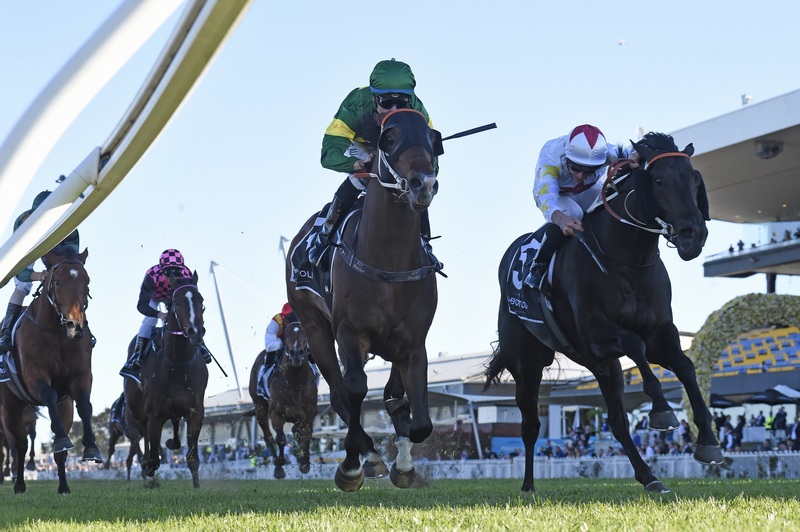 The stablemates Ole Kirk with Tommy Berry and North Pacific and James McDonald  separated by a head, picture Stevehart.com.au

“It is always hard, you always try and watch both horses. I could see North Pacific coming down the outside. To his credit he was very gallant in defeat. To put in the effort where he was to get back. Tommy just got held up. He had to wait for the right run. Probably that proved the difference,” said Michael Hawkes.

“They have streeted the rest. We have always had two really good colts. We have tried to separate them going forward. Obviously this is the Grand Final. To run one-two. Fantastic effort.

“With the hype on these horses. If you go back and look at Ole’s record it is absolutely outstanding. He is a stakes winner. King’s Legacy beat him 3/4L length. He has just got better.”

“I said to Neil Werrett before the first run, that the horse was going very good. As good as he has ever gone. He is from the All Too Hard, Black Caviar family, it just doesn’t get any better. He is going to excel further. Look out Caulfield Guineas,” he said.

“I did not know it was James outside me but I thought I was beaten 80m out. But Ole just pinned his ears back, he did not want to lie down," said Berry.

“He has had a great attitude all preparation, he is definitely a lot more mature than he was last season. The writing was on the wall last time, everyone forgot about him to a certain extent but we definitely did niot at home in the stable.

“I would like to congratulate Brooke, who rides him at him work, she does a wonderful job with him, and obviously the Hawkes team.

“I have had a great association with them for a long time. Since the grey (Chautauqua) retired I have struggled to find a Group 1 for them. It was nice to get it.

“The mile is going to suit him even better. The trip to Melbourne will not hurt him as he has done that plenty of times before. I will not be able to go down and ride him for that but it was nice to get one before he took off to run in the big smoke," he said.

The win was the second for John Hawkes after winning with Paratroopers in 2005 and this time he is joined by sons Michael and Wayne. For Berry it was his 30th Group 1 victory with his first in 2012 renewal of the Golden Rose on the Peter Snowden trained Epaulette.

The colt’s runup to the Rose was near flawless with seconds in the listed Rosebud over 1100m and the Group 2 The Run To The Rose over 1200m. With two Group placings at two Ole Kirk secured his Group 1 win at three, a future stud career and stakes earnings of $835,600. 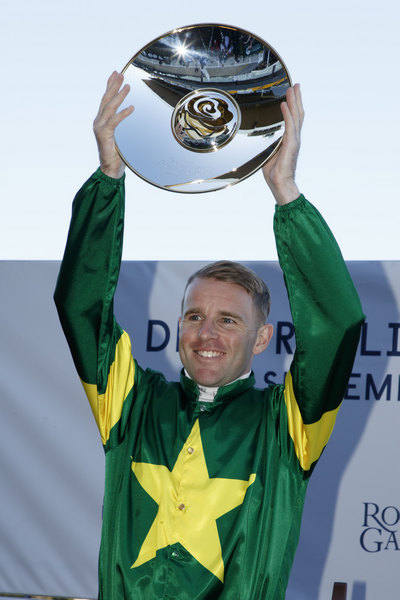 Jim Byrne (Rothfire): “He travelled a bit too strong outside the leader so I ended up taking it up myself. He got soft sections but as soon as we went over the line he felt a bit lame. Need to see what the vet says.”

Nash Rawiller (Mamaragan): “He overdid it first time in the winkers. Went Ok but is just not there yet. Hasn’t put it all together yet. He jumped better today and thought it would pan out beautiful for us.”

James McDonald (North Pacific): “He tried his heart out. He went super.”

Brenton Avdulla (Global Quest): “I ended up in a good spot. He just got a little bit wobbly at the top of the straight. I feel he is looking for a mile plus.”

Kerrin McEvoy (Peltzer): “He was OK. He might have felt the ground today.”

Tim Clark (Yardstick): “He’s come to the end of his prep.”