Champion jockey Oisin Murphy celebrated a significant career milestone at Southwell on Tuesday as victory aboard Perfect Sign in the 6f novice stakes gave the rider his 1,000th winner in Britain.

Murphy, 25, has raced to the top of his profession, landing the champion apprentice crown in 2014 before adding the senior riders' title for the first time last year. He currently leads William Buick by 10 as he bids to defend his crown with less than two weeks of the season remaining.

A graduate of the famed Kingsclere riding academy, Murphy has enjoyed the support of Andrew Balding throughout his career and became first rider to powerful owners Qatar Racing in 2016.

Fittingly, the landmark milestone was reached aboard another another Qatar Racing recruit in Perfect Sign and a delighted Murphy told Sky Sports Racing: "I ride for great people and it’s really nice to ride my 1,000th winner in Britain in these colours for Qatar Racing and Sheikh Fayed.

"When you start out as an apprentice you hope you can get a license and then ride a winner and so on," he continued.

"Hopefully I can ride 1,000 more in the future. I ride good horses all over the world and I’m very privileged to do that."

The nephew of three-time Cheltenham Gold Cup-winning rider Jim Culloty, Murphy celebrated a first Classic success in Britain earlier this year when teaming up with Balding and Qatar Racing to land the 2,000 Guineas with Kameko. 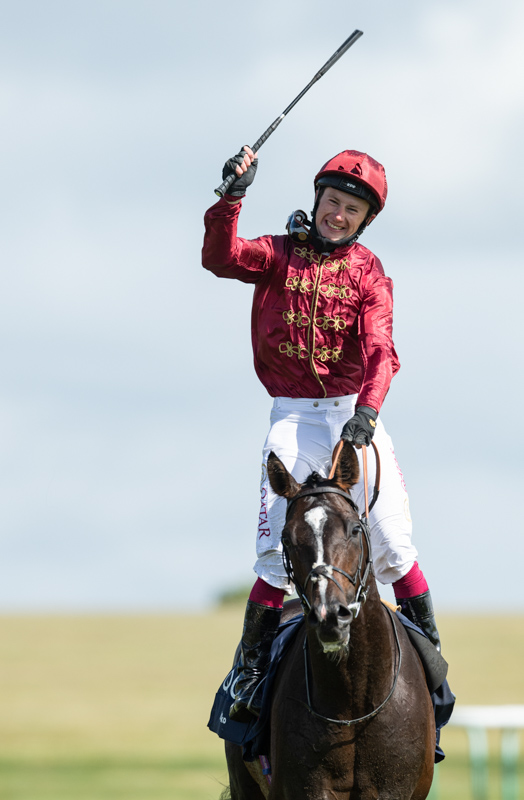 That win meant the world to Murphy and he said: "To win my first classic on Kameko was just incredible because as a child you watch all the big races on TV and that was my first one.

"We’ve been so lucky to find such good horses over the last few years. Roaring Lion was a great champion as was Kameko and it’s not easy to replace them."

Other big-race wins in the maroon and gold of his retained owners include Roaring Lion's four Group 1 wins in the Coral-Eclipse, Juddmonte International, Irish Champion Stakes and the Queen Elizabeth II Stakes in 2018.

As well as Kameko's Classic success, highlights this year for the rider include top-level wins on Dream Of Dreams in Haydock's Sprint Cup and success in the Cheveley Park Stakes on the Balding-trained Alcohol Free.

Earlier this month Murphy vowed to fight to clear his name after the shock news that he tested positive for cocaine while riding in France this summer.

A urine sample given by the Classic-winning rider at Chantilly on July 19 was found to contain metabolites of the drug. However, subsequent hair tests have found no trace of the substance and he categorically denies ever taking the drug.

Murphy was informed of the positive test on his A sample on August 19 and on the same day he organised for an independent laboratory to undertake hair sampling to prove his innocence. The lab analysed multiple hair segments and they tested negative for metabolites of cocaine.

The results have been shared with France Galop and he is currently awaiting results of the French authority's analysis of his B sample.