Trainer Lee Freedman saddled the trifecta in the $85,000 Gingerbread Man 2011 Stakes Class 2 race over 1600m at Kranji on Saturday with Ocean Crossing, Minister and Loyalty Man finishing in that order at the business end.

It probably was not the sequence the Australian mentor might have expected, but one which he gladly grabbed with both hands, without a doubt.

Minister, a three-time winner and gallant third in the Group 1 Singapore Derby (1800m) at his last start three weeks ago was arguably the stable’s main hope, but stablemate Ocean Crossing ($49) is no slouch either as he finished sixth, less than five lengths off the winner Top Knight in the same race. 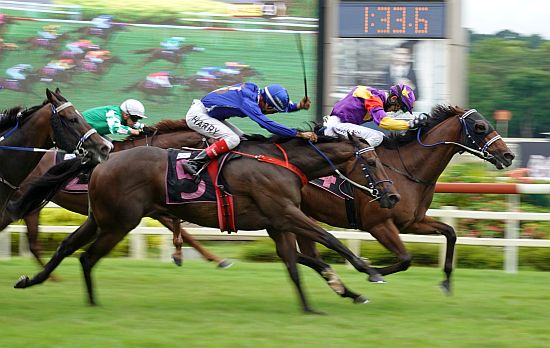 To see the son of All Too Hard pinch the first run on Minister (A’Isisuhairi Kasim) at the top of the straight and hold his ground all the way to the line was therefore not all that surprising.

“It was an interesting race, but in saying this, it was not a result which was unexpected by any stretch of the imagination,” said Freedman.

“There’s actually nothing much between the winner and the second horse. There is probably one length between them, and today, the winner had only 50kgs on his back.

“Minister was ridden back today as we can’t keep rolling forward from those wide draws (13) and be left a sitting duck.

“The other horse had the rub of the green from a better barrier, and that’s the way it goes at times.”

Ridden indeed more negative than usual, Minister hit the line strongly inside the last furlong, but tried as the US-bred Street Sense four-year-old might, he was beaten fair and square by half-a-length by Ocean Crossing, who, throughout the race, settled ahead of him in fourth spot.

As another sub-plot to that same Derby race, See came close to snaring his first Group 1 win aboard Elite Incredible when they went for broke halfway up the straight only to be nabbed close home by Top Knight.

That was actually the race that sprang to Freedman’s mind when he went scanning the jockeys available after Kellady dropped out.

“Joseph is a promising rider. I remember his second place in the Derby,” said Freedman.

“I picked him and he rode a perfect race.”

As Loyalty Man (Ruan Maia) came chiming in late for third another three parts of a length away despite bungling the start, Freedman couldn’t help wonder if the eight-year-old by Fastnet Rock could have reshuffled the tierce around had he not missed the start.

An inquiry was even opened to determine if the one-time winner was denied a fair start, but the result stood after it was clear he reacted to the removal of the blindfold as the gates crashed back, through no fault of anyone.

“It was a funny old race. He was blindfolded and it probably came off a fraction too soon, he leapt,” said Freedman.

“It is what it is, but it’s still a great result for the stable.”