Special Stone made a mockery of the 22/1 odds she was sent off as when she romped home in the Korean Oaks at Busan in July and she’ll be much shorter than that as she bids to confirm her status as the year’s top three-year-old filly in the Gyeonggi Governor’s Cup (KOR G3) over 1800m at Seoul Racecourse on Sunday.

All but one of the eight runners who go in Sunday’s race also took their chance in the Oaks and that day they were soundly beaten by Special Stone, who hit the front approaching the home straight and never came close to being caught, winning by a full seven-lengths on the line to record a first big race win for both jockey Kim Jeong-jun and trainer Kang Hwan-min, the latter having been licensed for just one year.

It was an impressive performance but back at her home track, can anything step up and end Special Stone’s winning streak at three? Top Busan trainer Kim Young-kwan arrives in the capital with two contenders. Blue Flag and Gyohaksangjang finished 4th and 5th in the Oaks and while Gyohaksangjang returns to action for the first time since then, Blue Flag has raced in the meantime and raced very well, leading all the way to win a class 3 handicap over 1800M by six-lengths. She is a “full” sister to 2014 Grand Prix Stakes winner Gyeongbudaero and still has a chance of turning out very nicely indeed. Busan’s champion jockey Jo In-kwen is in Seoul to ride her.

While Oaks second-placegetter Fire Wind doesn’t take part, the 3rd place finisher Seouri Byeol does. She absolutely flew home from 10th to 3rd in the final furlong defying her nearly 50/1 starting price. Yeongcheon Derby and Mone Flying, 6th and 8th respectively in the Oaks, round out the field along with the sole entrant here who didn’t take part, Okay Queen. They have it all to do if they are to deny Special Stone. 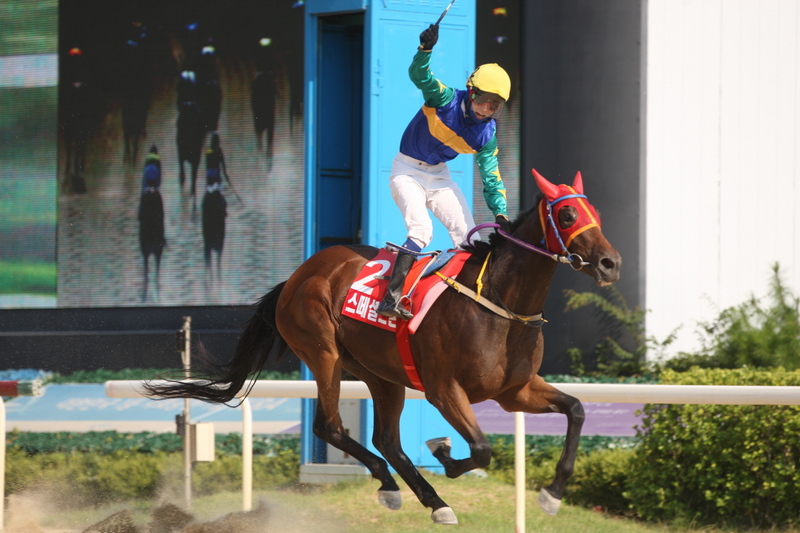