A tongue-in-cheek name given by trainer Daniel Meagher to one of his latest buys has sent a clear message that he doesn’t always take his sweet time with his horses.

Often ribbed by friends and owners over his well-documented patience of Job when getting his charges race-ready, the Australian decided to name a Zoustar yearling No More Delay, more for fun than to prove a point.

Well, Meagher has, in the name of fun, found a moniker that turned out to be spot-on with that three-year-old gelding he also fully owns. 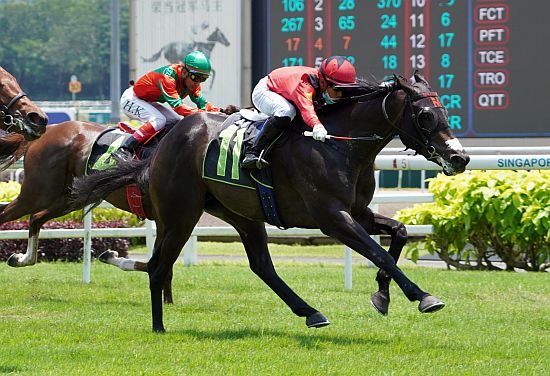 “They keep telling me I take too long to get a horse ready, so I named this one No More Delay,” he said.

“I bought this horse at the Inglis Classic (Melbourne) yearling sales for A$80,000. I own him myself, so that’s bloody good, too!”

Unplaced at his first two outings at Kranji, No More Delay ($24) indeed went on to show “bloody good” progress at his third start in Saturday’s $75,000 Restricted Maiden race (1200m).

Held in the firing line behind a fairly bunched-up cluster of horses for most of the way, No More Delay put in the big bounds once he was given the wriggle-on through a gap at the 400m as newcomer Istataba (Wong Chin Chuen) rolled off ever so slightly from Dragon Sands (Marc Lerner).

Packing a nice turn of foot, No More Delay finished the best to relegate Istataba into second place another half-a-length away, stopping the clock at 1min 11.16secs for the 1200m on the Short Course. Dragon Tycoon (A’Isisuhairi Kasim) ran third another 1 ¼ lengths away.

Despite the backstory behind the name, Meagher revealed he still wouldn’t cut any corners when it came to nurturing a young raw horse into a racehorse.

“I first gave him to (brother) Chris back home (in Mornington, Australia) to pretrain. He was very immature, but we took our time with him, and gave him a couple of jumpouts,” he said.

“He was very new, but he did very well in Australia. We saw some potential there, even if he was very naughty.

“After a bit of riding and training, we got him to focus better. His trials were good without being great.

“His runs were okay. I thought he copped an ordinary ride first-up, but at his second run, he ran terrific – he missed the start and took hold of Krisna (Thangamani), ran on well, but pulled up tired.

“I gave him a freshen-up and his last trial (September 16) was really good. He will get over a mile eventually, but he’ll go for a break now and I’ll then get him ready for the new year.”

As for Hakim, his tearaway lead in the apprentice jockeys championship keeps extending after he brought up a riding double having opened proceedings on Sun Ace for Desmond Koh in the $30,000 Class 5 Division 1 race over the mile.