No end of Affair in sight, just yet

The lush green paddocks of Trelawney Stud in New Zealand are ready and waiting, but trainer Jason Ong feels there is no need to put old boy War Affair out to pasture just yet.

At 10, most of his fellow competitors, especially the high achievers, would have long left the racing game, but the 16-time winner and multiple-Group winner (12 all up, including five at Group 1 level) is still going strong at Kranji. 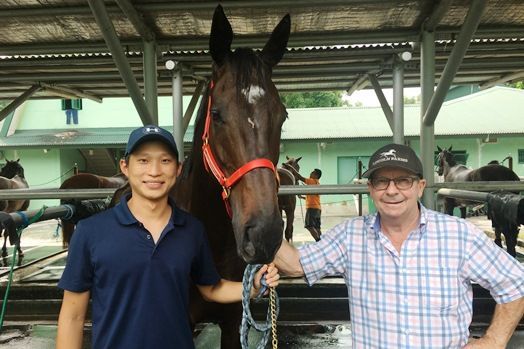 Undoubtedly, the dash of old that rang circles around his rivals is not quite there anymore. The son of O’Reilly has not won a race in more than three years since a dead-heat with Storm Troops in the Group 3 Saas Fee Stakes over 1400m on May 14, 2017.

It was not for lack of trying, though. From the losing run of 20 races since that day, 12 were contested at Group level - including two in New Zealand during a 1 ½-year hiatus in 2018, mainly to recover from his well-documented wind issues – and often, against younger guns.

There were the odd flashes of brilliance as well. Such as his last start on August 2 when he was still in the mix at the 200m in a Class 1 race over 1400m, but as has often been the case, he was swamped in the end, albeit not beaten too far off Passport To Rome.

Yet again, War Affair pulled up a treat after the race, not something that could be taken for granted at the peak of his powers when his brilliant career was either curtailed by suspensory or respiratory issues.

This Sunday, he lines up in his third Kranji Mile in another age-defying mission most pundits see as impossible, but Ong sees no reason why he doesn’t deserve his chance.

“I thought he ran well at his last start. He got a bit unlucky when he was boxed in on the fence,” said the Singaporean handler.

“If he had got a clear run, he could have finished a lot closer. We drew one and we didn’t want to lose the advantage of the draw, that’s why we found ourselves closer to the speed.

“It’s been two weeks between runs, which is not ideal, but he’s come along well. I was very pleased with the way he pulled up.

“He galloped on Wednesday and he’s still in the same form as he was going into his last race. He got a wide draw (16) this time, we can only hope for a fast pace so he can slot in somewhere.

“He’s quite versatile. He just needs the pace to be genuine as he’s a big-striding horse, a slow pace would not be ideal.”

While some trainers prefer to book a senior rider for their horses in a Group 1 event, Ong has again handed the steering duties to his apprentice jockey Zyrul Nor Azman, the former New Zealand-based apprentice who has now teamed up with War Affair at his last three runs.

To Ong, it’s a matter of trust - and paying it forward.

“Zy is a family man now, he’s even more dedicated, and works very hard at the stables. He’s always keeping himself fit,” said Ong who used to share the same boss as Zyrul, Bruce Marsh, until the latter retired last year, with Ong taking over as the new trainer in charge.

“I was fortunate during my time as an assistant-trainer, I was given my chance by Bruce. I believe in returning the same to my apprentice for his chance to shine.

“It’s also about getting on the right horse for apprentices. Zy has never really done anything bad, and I have no problem putting him on a good horse, even if I don’t have too many of them.”

War Affair has certainly given the Ong family of Warplan Racing Stable many accolades in his heyday. One of them happened to be the Kranji Mile as a four-year-old when the feature race was then cast as the first Leg of the Singapore Triple Crown Challenge.

In 2018, the Kranji Mile was revamped into an Invitational race with a view to eventually replace the now-defunct Singapore Airlines International Cup (2000m), last run in 2015. War Affair was actually part of the home team in that inaugural edition, but could only run seventh to Hong Kong’s Southern Legend.

But because of the havoc wreaked by the COVID-19, this year’s Kranji Mile, which was meant to be run as an International Group 3 race for the first time, has now slid back to domestic Group 1 level.

“The Kranji Mile was always his target, even before COVID-19,” he said.

“COVID-19 has upset a lot of things in racing, but one rare good thing to have come out of it is the Kranji Mile with no more overseas horses. Win or lose, the winner will benefit our local community, which is great.

“It’s still a very strong field, and it won’t be easy for the old boy.”

When asked if War Affair had not reached the end of the road, Ong was not putting any timeline to it. To him, age is just a number, anyway.

“The owners are enjoying having him around and still racing. He’s showing no signs his time is up,” he said.

“Age is a concern, yes, but at his last start, he showed he could beat a few younger horses. We’ll make plans race by race and then reassess if it’s time to retire him.

“The Trelawney Stud (where War Affair was born and where he stayed during his New Zealand rehab) has already offered their place as a home after his racing days. So, at least, that is secured.

“It would of course be nice if he could win at least one more race before he stops, or end his career on a winning note, but even if he doesn’t, that’s fine, he owes us nothing.

“When he tells us it’s game over, we will give him the retirement he so fully deserves.”