This Sunday Tokyo Racecourse hosts the 26th running of the NHK Mile Cup, a Grade 1 turf. 25 3-year-olds, among them three fillies, have been nominated for the full-gate of 18. With 18 having already secured their berths through trials or earnings, a withdrawal will be the only chance the remaining seven nominees have at landing a spot.

In its early years, the race was known as a foreign-bred stronghold, and American-bred horses dominated the winner’s circle for 6 years. In 2002, Japan-bred Telegnosis turned the tables and locally bred horses have won ever since. This year three foreign-breds in the lineup - two by Kingman, the English-bred Elizabeth Tower, and German-bred Schnell Meister, and the Gleneagles-sired Shock Action, born in Ireland - will attempt to become the first foreign-bred in 20 years to win the NHK Mile Cup.

Important prep races for the NHK Mile Cup include the Grade 3 Chunichi Sports Sho Falcon Stakes, a 1,400-meter race held at Chukyo this year on March 20, and, on the following day, the Fuji TV Sho Spring Stakes, a Grade 2 over 1,800 meters at Nakayama. The New Zealand Trophy, a Grade 2 over 1,600 meters at Nakayama (this year on April 10) was traditionally considered an important springboard to the NHK Mile Cup, but in recent years a good performance in the Grade 3 Arlington Cup, run this year on April 17 over the Hanshin 1,600 meters, has been seen a good predictor of success in the NHK Mile Cup. NHK winners in recent years have also come directly from the top five finishers in the Satsuki Sho (Japanese 2000 Guineas) and the Oka Sho (Japanese 1000 Guineas).

The Tokyo mile starts in the backstretch of the course, where races are run to the left. Horses run more than 500 meters before the first turn. After straightening into the homestretch, it’s another long ways (525 meters) to the finish line, with an upward slope starting shortly into the stretch and continuing for about 200 meters.

Here is a look at the expected top choices.

Grenadier Guards: Top earner of the field and son of superhorse Frankel, Grenadier Guards collected big money four races into his career by acing the 2-year-old pinnacle Asahi Hai Futurity Stakes. And, he tied the 2-year-old record doing so, with a time of 1 minute 32.3 seconds. He topped Stella Veloce, who went on to finish third in the Satsuki Sho, by 3/4 length. Three months later on March 20, Grenadier Guards followed his Hanshin victory mile up with a solid show of tenacity in the Grade 3 Falcon Stakes. The bay colt followed the front-running Rooks Nest (carrying 1 kg less) over the line in second by a head. This will be the first time for Grenadier Guards to take on Tokyo. Jockey Yuga Kawada, who has ridden all the colt’s races thus far, is set to ride Sunday. 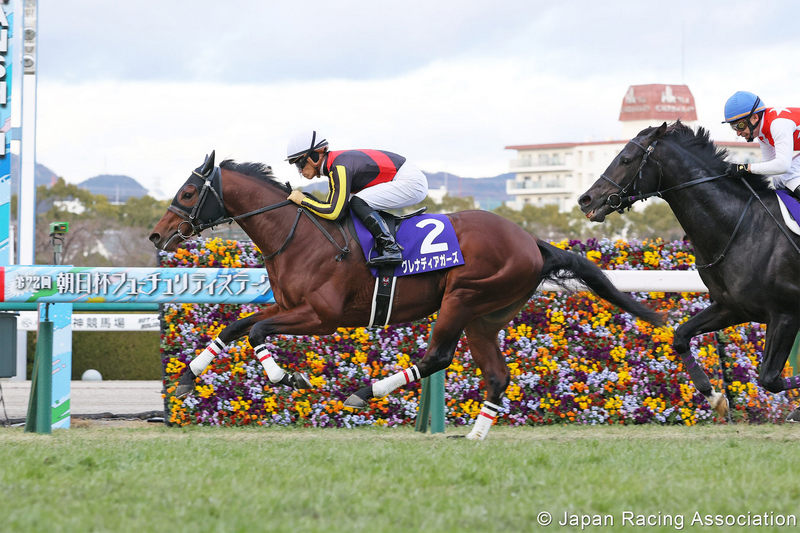 Rooks Nest: A versatile colt who can run successfully from any position, Rooks Nest is one of two first-crop progeny by champion miler Maurice in the NHK Mile Cup lineup (Pixie Knight is the other). After a second in the Grade 3 Nikkan Sports Sho Shinzan Kinen (Chukyo, 1,600 meters) that saw him top Bathrat Leon, Rooks Nest took on the Falcon Stakes. Weighing in at 510 kg, he broke beautifully, was sent to the front for the first time and held his ground all the way. This will be the colt’s first time at Tokyo and his first time to haul east from his Ritto base, but he is 2-2-1 over left-handed Chukyo.

Schnell Meister: Schnell Meister, a son of the European four-time G1 miler Kingman, won his debut over the Sapporo 1,500 meters, then aced his second start over the Nakayama mile. Last out, he finished second one and a quarter length behind Titleholder in the Grade 2 Hochi Hai Yayoi Sho Deep Impact Kinen, which earned him a ticket to the Satsuki Sho. But, considering the leisurely pace of the Yayoi Sho and his bloodline, it was decided to sit the Satsuki Sho out and come here instead. Jockey Christophe Lemaire is expected to have the ride.

Bathrat Leon - One of the more experienced horses in the lineup is the Kizuna-sired Bathrat Leon, with three wins and, in graded stakes races, two thirds from a total seven starts thus far. He also finished fourth in the Grade 1 Asahi Hai Futurity Stakes. His last four outings, three of them this year, have all been over the mile and he posted a fine 4-3-1-1. His most recent test saw him romp to a win of the Grade 2 New Zealand Trophy at Nakayama. It was a wire-to-wire victory that blew away the competition with five lengths between him and runnerup Time to Heaven, and another length and a half to City Rainbow in third. Bathrat Leon is one of two horses (the other is Ho O Amazon) in the NHK Mile Cup hailing from the stable of Ritto-based Yoshito Yahagi, who just scored his first win in Hong Kong with Loves Only You. This will be Bathrat Leon’s first time at Tokyo, though his trips to Sapporo indicate shipping from Ritto shouldn’t be a problem. Jockey Yusuke Fujioka, who rode the colt’s debut and G2 win, is pegged for the ride.

Ho O Amazon - In all but one of his six starts, Ho O Amazon has either won or finished second. Second in the Grade 2 Daily Hai Nisai Stakes last November and coming off a win of the Grade 3 Arlington Cup, both races over 1,600 meters. Ho O Amazon’s ninth in the Asahi Hai Futurity Stakes in between could be thrown out due to lameness. Ho O Amazon’s got mile blood on both sides. His sire King Kamehameha, though known more for his wins over distances 2,000 meters and up, won the NHK Mile Cup in 2004. And, dam Hikaru Amaranthus won the Grade 3 Kyoto Himba Stakes in 2010 and later that year ran second by a neck to Buena Vista in the Grade 1 Victoria Mile. Jockey Yutaka Take returned to racing last weekend after an injury suffered in the gate March 20. He’s already picked up two wins and is expected to be paired with Ho O Amazon for the first time. Take has three wins of the NHK Mile Cup and looks to take the lead for most wins if he can reach the winner’s circle Sunday.

Others to watch are:

Pixie Knight won the Grade 3 Shinzan Kinen over the Chukyo mile and has only missed the top three spots once in his four-race career, when he ran fourth 0.4 seconds off the winner over heavy ground in the Arlington Cup last out. A missed break and a bad trip saw Songline unable to give it her best in the Oka Sho. She’s back to avenge her otherwise stellar record of two wins and a second. Another Lyric topped the field in the all-female Listed Anemone Stakes, but passed on the Oka Sho to compete here against the boys for the first time in her three-start career, from which she has posted 1-2-1, all over the mile. The Lord Kanaloa-sired Rickenbacker, with all but one start from seven on the board, was second to Rooks Nest in the Arlington Cup.