Unfancied Awapuni galloper Master Fin caused a massive boilover in one of the special features at New Plymouth on Saturday when he outstayed his rivals to take out the NZB Airfreight Road To The Jericho (3210m).

It was the second running of the race that serves as the first New Zealand qualifying event for the unique A$304,000 Jericho Cup (4600m) at Warrnambool in late November, a race that was introduced in 2018 to commemorate the centenary of a race run on the desert sands in Palestine in World War I to divert attention from the Australian Light Horse's charge at Beersheba.

Trainer Mark Oulaghan was unsure as to whether his nine-year-old Nom Du Jeu gelding had the class to defeat his thirteen rivals on Saturday but knew he had him rock hard fit off the back of three consecutive placings in hurdle events.

It was that fitness that paid dividends for Master Fin as rider Chris Dell settled him in midfield before moving forward to dispute the pace on the point of the home turn. Master Fin refused to yield as he got the better of the well fancied Hi I’m Nikita in the last 100m to score at $61 on the TAB Fixed Odds market.

Oulaghan was still pinching himself after the race as he took in what he had just seen from his charge who was away from the track for three and a half years after sustaining a tendon injury when winning the Summer Cup (2400m) at Trentham back in September 2016.

“I knew he would be fit enough but he’s nine years old and hasn’t won a flat race for quite a while so that was a big question mark before the race,” he said.

“Looking at the field, they were mainly jumpers so I thought if he could revert to his best flat form he was a big show, but it was just whether he could actually do that.

“To be quite honest I wasn’t sure just how he would go but he was good enough to win a Summer Cup earlier on in his career before he got injured.
“He was off the scene for ages after he hurt a tendon when he won that race and he did have good form around that time.

“Touch wood, he has been okay since he came back about a year ago but he hadn’t won a race until today.”

Master Fin is owned and bred by Awapuni identity Graeme Martin who Oulaghan believes will be keen to see his charge make the trip to Australia to contest the Jericho Cup.

“He probably fits the bill for the race in Australia but I will have to speak to Graeme about that,” Oulaghan said.

“I would think he will be keen but we will just have to see how things pan out before any final decisions are made.”

This year there are two special qualifying events run in New Zealand that provide guaranteed entry into the Jericho Cup with the second being raced at Riccarton on Saturday October 24. The 2020 Jericho Cup will be run at Warrnambool on November 29. 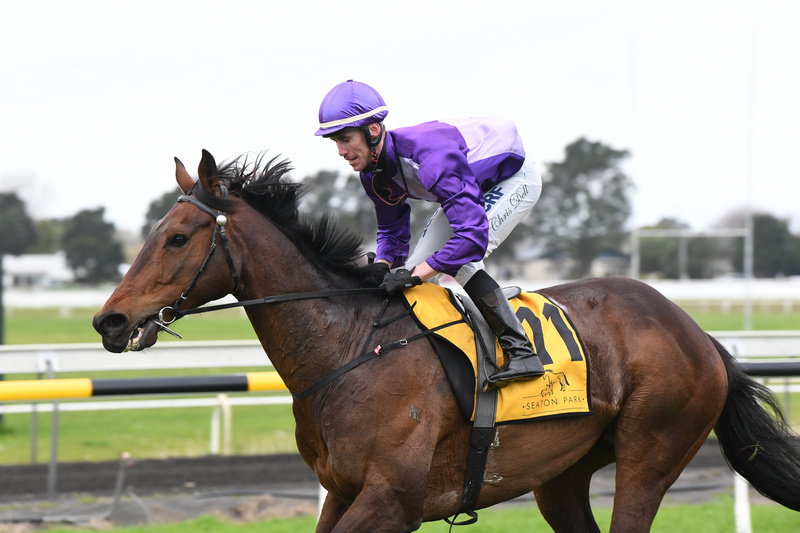 The lightly raced Jimmy Choux five-year-old relished the testing Heavy10 underfoot conditions as she repelled the challenges of local mares London Express and Ladies First to register her sixth career victory and first at stakes level at just her 15th start.

Rider Sam Collett bounced her away quickly from an outside barrier to set up a steady pace before putting the pressure on with 600m to run. Collett asked for a final effort in the run home and the answer was immediate as Supreme Heights drove clear to win by a length and a half at the line.

Trainer Mark Brosnan had been worried about the testing track conditions before the race but was relieved to see how well his charge handled the going during the race.

“From that wide draw it was a very tough effort,” he said.

“We knew we were going to have to use her from the draw as it wasn’t an advantage to get back.

“I wasn’t that confident that she was going to cope with the ground but she handled it better than I thought she would. She won on a Dead6 at Te Rapa last time and I think that’s her favoured surface but she does go pretty well on the heavy stuff as well.”

Raced by a large group that includes her co-breeder, well known Matamata veterinarian Bill Ewen, Supreme Heights will now attempt to add a second black type success to her record before heading to the spelling paddock.

“She might have one or two more starts before we pop her out for a break,” Brosnan said.

“The logical target would be the Breeders’ Stakes (Gr.3, 1400m) at Hawera in a fortnight but we will just have to see how she pulls up.

“The way she keeps improving we might even have to have a look at the Group One at Te Aroha in the autumn as I’m pretty sure she will get a mile as she continues to strengthen up.”

Brosnan was referring to the Gr.1 New Zealand Thoroughbred Breeders’ Stakes (1600m) that is normally raced at Te Aroha each season however this year the race wasn’t held due to the COVID-19 pandemic lockdown that halted all racing in New Zealand at the time.

The win brought up a special milestone for Collett who registered her 800th victory in the saddle after commencing her apprenticeship back in the 2006/007 season. It was the first stakes victory for the season for Collett and the 37th overall in a career that saw her take out the 2017/18 National Jockey’s premiership with 131 victories.

Race favourite Quattro Quinta backed up an impressive trial performance ten days ago when he proved too quick for his rivals over 880m in the first two-year-old event of the season at Ellerslie on Saturday.

The Darci Brahma gelding was warmly supported off the back of his impressive victory in a 650m trial heat at Te Rapa and never gave his backers cause for concern as he sat in behind a steady pace for rider Troy Harris before asserting his superiority in the run home to win by a comfortable two and a quarter length margin.

The first two-year-old to step out this season for leading trainer Jamie Richards, Quattro Quinta is bred and raced by Karyn Fenton-Ellis (MNZM), Greg Tomlinson, David and Matthew Peacocke, and Oliver Saxton.

Richards was delighted to get the victory after producing subsequent Karaka Million 2YO (1200m) and Gr.1 Sistema Stakes (1200m) winner Cool Aza Beel to win the first two-year-old event of the season last year as well.

“It was a nice win from a nice horse,” Richards said.

“It’s good to win early season two-year-old races and get them going.

“He’s come to hand naturally and hasn’t had any pressure put on him, like we treat all our horses at two.

“He had a couple of jump outs and a soft trial, came here in good shape and we were really pleased with him when he worked up the back straight on the plough on Wednesday morning at Matamata.

“It’s such an advantage when the weather improves and we’re able to use the plough again, and the winners really start to flow as the tracks get better.”

“He’s bred by some good supporters of the stable, so I’m very pleased for them, and it was great to have Troy (Harris) back out there riding winners.”

From the stakes placed mare Quintette, a daughter of the two-time Group One placed and Gr.2 New Zealand Cup (3200m) winner Everswindell, the Darci Brahma gelding had plenty of stable expectations around his raceday debut.

“He’s a horse we bred here at the farm and it’s very exciting for the breeders, who also raced his dam, Quintette,” Te Akau Racing principal David Ellis CNZM said.

“We’ve also just received news overnight that she had a filly foal by Xtravagant (Pentire) at Newhaven Park Stud as well.

“Our equine manager (Enzo Di Leoni) here at the stud broke him in and thought he could be our first two-year-old winner this season, and he was dead right.”

Fired up Dawn Patrol gets the job done at Ellerslie

A pipe opener over 500m on Friday worked the oracle for classy sprinter Dawn Patrol as he downed a quality field over 1400m at Ellerslie on Saturday.

The five-year-old Dawn Approach gelding was having his second start in a new campaign after finishing well back in the Gr.2 Foxbridge Plate (1200m) first up at Te Rapa.

Trainer Frank Ritchie was keen to get plenty of work into his charge after he faded out badly in his first run, to the point where he gave him an extra assignment twenty-four hours before Saturday’s contest.

“He’s a big, gross horse who blew like hell after his first run,” Ritchie said.

“I gave him a gallop on Wednesday and he blew after that as well so I gave him another sprint over 500m on Friday.

“It’s not something I do that often but it allowed him to open his pipes and get that extra fitness edge.

“The only problem is that it makes him sweat up and he was in a bit of a lather today.

“The good thing is today’s race will bring him on further so I don’t think I’ll need to do that again.”

Although he finished runner-up to Madison County in the Gr.1 New Zealand 2000 Guineas (1600m) as a three-year-old, Ritchie is keen to keep Dawn Patrol to the sprint distances in this campaign with an eye to the Gr.1 Sistema Railway (1200m) at Ellerslie on New Year’s Day.

“I wanted to see what happened today before I look any further down the track,” he said.

“I was thinking about going to New Plymouth instead of Ellerslie but the heavy track put me off as he wasn’t seasoned enough for that.

“I’ve got a few ideas for him but I’ll wait to see what the handicapper does before I look to finalise anything.

“Races like the Railway, where he ran fourth last year, will be on his radar along with a couple of the lead-up events.

“He’s actually from a family of stayers but he goes so well over the sprint distances that we’ll keep him to that at this stage.”

Raced by former Auckland Racing Club director Rex Jensen, Dawn Patrol was purchased by Jensen for $20,000 out of the Monovale Farm draft at the 2017 Select Yearling Sale at Karaka. He has now won five of his 15 starts and just over $234,000 in prizemoney