The New Zealand racing industry has lost one of its most respected and valued contributors with the death of Bernard Kelly, OBE, at age 90.

Kelly was actively engaged in New Zealand racing administration during an era rather different to the modern day, rising from club committee membership to the presidency of the gallop code’s supreme body, the NZ Racing Conference.

Born in Hawera and educated at Te Roti Primary and Hawera High School, he began his working life as a clerk at stock and station agency Newton King, graduating to livestock manager and ultimately regional manager for Taranaki/Wanganui.

“Dad had always said he would retire at age 50, and he kept his word,” recalled Kelly’s son Peter.

“At the same time he had developed significant interests in dairy farming in South Taranaki, which he recently referred to when he told me during that time 27 share-milkers had worked for him and 24 of them went on to become farm owners themselves.

“That was him, always encouraging and helping the people around him to advance themselves; it was something he took special pleasure from.”

For 20 years from 1960 Kelly was on the committee of the Egmont Racing Club, including six years as president.

When he took up residence in New Plymouth he served for another quarter-century on the Taranaki Jockey Club committee, and he was granted life membership of both clubs.

The executive of the NZ Racing Conference comprised district committee members from the country’s designated regions and Kelly represented Taranaki for 16 years.

In 1983 he won a four-way contest for the Racing Conference vice-presidency and a year later he succeeded Auckland Racing Club president Arthur Hughes at the top of the table.

“Bernie was a man with high principles, conservative and pretty straight up and down,” recalled Manawatu identity Allan Fenwick, who was appointed chief executive of the Racing Conference during Kelly’s presidency.

“He was a popular president back then in the 1980s and earned the respect of the wider industry as well.”

Kelly was also a board member of the New Zealand Racing Authority and the Totalisator Agency Board from 1975 to 1984, chairman of the NZ Racing Conference’s General Trust Fund 1991-2007 and a member of the Judicial Control Authority 1995-97.

In 1989 he was awarded an OBE for services to racing, something that his family said he took special pride from.

Further family pride came through his older brother Peter, whose eminent role as a racing commentator and bloodstock auctioneer was recognised with induction to the New Zealand Racing Hall of Fame.

“He lived to some degree in his brother Peter’s shadow, but that didn’t in any way diminish the pleasure he got from his own involvement,” said his son Peter.

“Dad loved everything about racing, and when we were growing up it was always an enjoyable day out when he took us along with him to the races.

“One of his lesser known roles following his time at the Racing Conference was chairmanship of the General Trust Fund that saw to the welfare of injured jockeys and others in need.

“He had strong values and I’ll never forget his saying that there’s only one person who could give away your integrity.

“Dad had a good innings, a life well lived, and it was only six months ago that we lost our mother Josephine after a marriage that lasted nearly 65 years.” 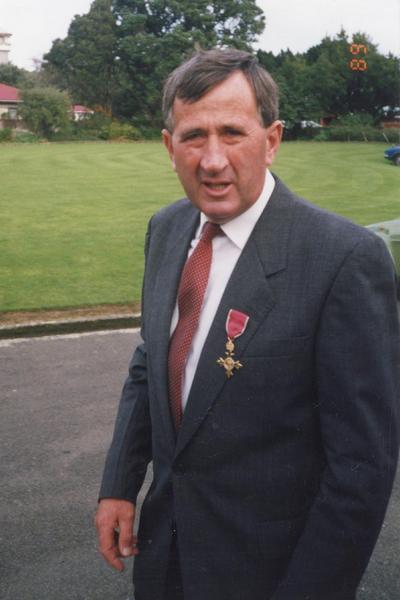