Marsh out to plunder Hastings gold

Cambridge trainer Stephen Marsh is heading to Hastings on Wednesday to try and record more Group honours with Zee Falls, but he could be back in Hawke’s Bay in just a matter of days in search of bigger spoils.

Marsh is set to contest the $1 million Classic with stakes winner Milford and he said he is not overly perturbed which venue hosts the race.

Marsh has been pleased with the lightly-raced colt, who won the Listed Te Akau Gingernuts Salver (2100m) before finishing fifth in the Gr.2 Avondale Guineas (2100m) last start.

“He was a little bit green around the bends, but I thought it was a very good run in the Guineas, and he was good late,” Marsh said.

Marsh believes the Savabeel colt, who has worn side winkers previously, will benefit from the addition of blinkers.

“I am more than happy with Milford, he had a good gallop this morning,” he said. “We have changed a bit of headgear, he will wear blinkers.

“He is right on song wherever they run the race.”

All going to plan after the New Zealand Derby, Milford will travel to Sydney to contest the Gr.1 Australian Derby (2400m) at Randwick on April 3.

Marsh has put a few contingency plans in place with what path he takes towards the Derby.

While Marsh may head to Hastings on Sunday, his focus is currently on the Hawke’s Bay venue where Zee Falls will contest the Gr.2 Little Avondale Stud Lowland Stakes (2100m) on Wednesday.

The daughter of Sacred Falls has drawn barrier 18 in the Group Two feature and will be ridden by Lisa Allpress, who was victorious aboard Zee Falls in the Gr.3 Wellington Stakes (1600m) last year.

“She has copped a couple of them (wide draws) in a row, but you can’t do much about that. It’s not ideal, but we just have to deal with it,” Marsh said.

Zee Falls finished eighth fresh-up in the Karaka Million 3YO Classic (1600m) in January before finishing runner-up in the Gr.2 Waikato Guineas (2000m) behind Tokorangi, who is currently third favourite for the New Zealand Derby.

“I was really happy with her run in the Waikato Guineas,” Marsh said. “She has bounced out of that really well.

“She will be better for having the one run over ground and I just can’t fault the way she is going into this race.”

Zee Falls may be joined by stablemate Ciambella on Wednesday, but Marsh said a start in the Gr.3 McKee Family Sunline Vase (2100m) on Sunday may be a more realistic option for that filly.

“Ciambella is a maiden and she might have to run in the Sunline Vase if she doesn’t get in tomorrow. We are hoping she makes the field tomorrow, but she needs two scratchings, so she is probably doubtful.”

TAB bookmakers have installed Zee Falls as a $6 second-favourite for the Lowland Stakes, behind stakes performer Cheaperthandivorce at $4.80.

Fleetwood Maca on song ahead of Lowland

Punters should disregard Fleetwood Maca’s last two runs when assessing her chances in the Gr.2 Little Avondale Stud Lowland Stakes (2100m) at Hastings on Wednesday according to co-trainer Pam Gerard.

Fleetwood Maca has shown plenty of ability to date, most notably when pushing boom filly Amarelinha to 1-1/4 lengths in the Gr.2 Eight Carat Classic (1600m) at Ellerslie on Boxing Day.

Her two runs since don’t look encouraging on paper — seventh in the Gr.2 Royal Stakes (2000m) at Ellerslie on New Year’s Day, and then eighth in the Gr.3 Desert Gold Stakes (1600m) at Trentham in late January.

But Gerard, who trains with Mike Moroney at Matamata, said there are valid excuses for both.

“In the Royal Stakes she got very badly checked mid-race, clipped a heel and blundered badly and how she didn’t fall I’m not sure. It probably knocked her confidence a little,” Gerard said.

“Then everything went wrong in the Desert Gold Stakes. She got very worked up at the start, but even then she travelled up nicely to the corner. But the track was off on the inside that day and unfortunately she ended up on the worst part of the track.”

In-form jockey Samantha Collett takes the ride aboard Fleetwood Maca in the Lowland, who is rated a $9.50 third favourite.

Gerard also has Dragon Queen ($12) in the Lowland Stakes field, though she may start in Sunday’s Gr.3 McKee Family Sunline Vase (2100m) on Derby Day instead.

“She’s drawn an outside gate (13) in the Lowland, which makes it very tricky for her,” Gerard said.

“The Sunline Vase may have a smaller field – obviously Amarelinha’s in there, but I’m not scared of the horses there.”

Dragon Queen ran well for fourth in the Gr.2 Auckland Guineas (1600m) and then finished sixth in the Karaka Million 3YO (1600m), and should relish the step up to 2100m, Gerard said, though rain would not help her.

Tokorangi is behind just Rocket Spade and Montre Moi in the Derby fixed odds market after scoring a well-deserved victory in the Gr.2 Waikato Guineas (2000m).

“That was the first time she’d got a decent draw,” Gerard said.

“She’s just done her final bit of work this morning. She had a bit more up her sleeve and I’m very happy with where we’ve got her.”

Grip, who will start at outside odds, won his maiden nicely in October but has finished behind the placegetters at his three subsequent starts, his most recent run being a ninth-place finish in the Gr.2 Avondale Guineas (2100m).

“He’s going to be a lovely staying type of horse in time,” Gerard said. “He’s not there yet but he’s not the worst horse in the field and he’ll certainly see out the 2400m.”

The biggest uncertainty about the Derby is still whether it will remain at Ellerslie or be transferred to Hastings if Auckland remains at Covid Alert Level 3 on Sunday.

“Honestly it’s not ideal, but they are doing their best to run it, so we’ve just got to have our horses ready,” Gerard said. 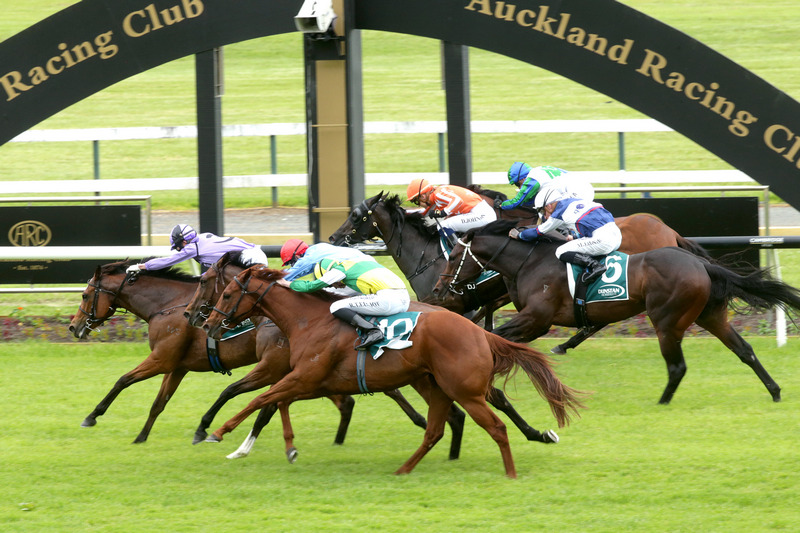 Star mare Melody Belle showed she was on track for the Gr.1 Bonecrusher New Zealand Stakes (2000m) with a solid hit-out at the Rotorua trials on Tuesday.

The Jamie Richards-trained six-year-old beat just one runner home when not having all favours in the Gr.1 Herbie Dyke Stakes (2000m) at Te Rapa last month but seemed her sparkling self on Tuesday.

The 13-time Group One winner relished the strong tempo set by Rhaegar in the 1230m heat and got the better of that rival late to win the trial, with stablemate Savy Yong Blonk powering home for third.

John Galvin, who manages the Melody Belle Fortuna Syndicate that owns the multiple New Zealand Horse of the Year, confirmed that Troy Harris, who partnered Melody Belle in the trial, would take the mount at Ellerslie on Saturday week.

“It was a very good trial. I think the strong pace set it up nicely for Melody Belle and gave her a good hit-out,” Galvin said.

“Troy actually had a devil of a job to pull her up past the post. The feedback from both Jamie and Troy was all positive and she is right on track for the Bonecrusher.

“Troy will be riding her in the Bonecrusher. He has won three Group Ones on her and is unbeaten on her. I have lost track, but he has had something like 13 rides in the Fortuna colours for 10 or 11 wins, so it has been a successful association.”

Melody Belle could potentially clash with star stablemate Avantage in the weight-for-age Ellerslie feature on March 13 and her performance will dictate future plans.

“The loose plan is that if she runs well in the Bonecrusher, she could then go to Australia where she is nominated on the second day of The Championships for both the Queen Elizabeth (Gr.1, 2000m) and the Coolmore Legacy Stakes (Gr.1, 1600m), so there are a few options once we get a guide from her run at Ellerslie,” Galvin said.

High-class mare Levante ran out a ready winner of her 1230m heat at the Rotorua trials on Tuesday and most importantly jumped away cleanly from the starting gates and will be seen back at the races on Saturday week.

The Ken and Bev Kelso-trained four-year-old missed a place for the first time in her nine-start career when bombing the start at Te Rapa in the Gr.1 BCD Sprint (1400m) last month, but still charged home for fifth.

The daughter of Proisir jumped well from an inside draw under regular rider Sam Collett on Tuesday and had two lengths to spare on Group One galloper Tiptronic at the line in a competitive open heat.

“I was very pleased with her,” Ken Kelso said.

“We gave her a jumpout here on her home track (at Matamata) last Thursday with a couple of our older horses. She jumped away really well then and she jumped away smartly again today, so hopefully that seems back on track.”

With a hold-up at the start at Te Rapa due to a rival requiring farrier attention, Kelso was forgiving of his Group Two winner and loathe to tinker too drastically.

“We didn’t do a lot. We had a good talk to the barrier boys, but I think it was the fact that she was in there a very long time at Te Rapa,” he said.

“We just kept her motivated before the start, trotted her around, we did the same at the jumpout, kept her trotting around beforehand as long as we could and got her loaded reasonably late, which I got permission from the stewards to do so.

“I think she just went in (to the gates) very early the other day and went to sleep basically.”

Levante will run next at Ellerslie on March 13 in the Royal Descent Stakes (1600m).

“It’s a fillies and mares 1600m set weights and penalties race and Pearl Series which she is eligible for as well, so it becomes a nice race for her even if it isn’t black-type,” Kelso said.

“She will go there, and we are looking forward to seeing her step up to a mile. I think it is going to help her with the way her pattern of racing is. She is definitely bred to go a mile.

“All-in-all, I was quite happy with the jumpout last week and the trial today.”

The Royal Descent Stakes will help shape a plan for the exciting galloper, who has Group One options on both sides of the Tasman.

“We will get through the Royal Descent and then we have two options. One obviously is the Thoroughbred Breeders’ Stakes (Gr.1, 1600m) at Te Aroha, or we have put in a nomination for the Coolmore Legacy (Gr.1, 1600m) in Australia.

“It all depends on what she does at Auckland, it depends on track conditions, it depends on COVID, so as far as going forward we will get through the Royal Descent and then decide what we do.”

Meanwhile, Kelso is pleased with the continued progression of another talented four-year-old mare in Les Crayeres, who will line-up in the Graeme Thomson Antique & Estate Jewellery 1600 at Ellerslie on Sunday.

The Sir Peter Vela-bred and raced daughter of Redoute’s Choice has won three of her six starts, all in her first campaign, and showed a dazzling turn of foot to win over a mile at Te Rapa last start.

“She has kept improving and her temperament is getting better,” Kelso said.

“Obviously she was a little bit highly strung earlier on, and still is, but is improving all the time.

“She is a big staying mare with a future. She has a good turn of foot and has been doing really well in the feed bin and on the track.

“Her run the other day was good but this is another step up and the idea of going to Auckland is to give her a look around Ellerslie and then we will decide whether we put her aside till next season.”