The daughter of Zacinto has placed in all three of her starts since her 11th placing in the Gr.1 New Zealand 1000 Guineas (1600m) in November, and her trainers believe she is a big chance in breaking maiden company in the Clubs New Zealand 1600 on Saturday.

“Da Vinci Girl has always been a filly that we have earmarked for the Oaks. We ran her in the Guineas with a view to that,” Matthew Pitman said.

“We are a firm believer that if you want to take on the best you have got to do so early. It hardens them up for what you target later on.

“That has been our mindset with her early on. She is a genuine mile and a half horse, so the distance of the Oaks is ideal.

“She is going to Trentham this time to give her a chance to look at the course and pick up a nice maiden race if she can get the job done.

“She has drawn (1) to get a nice run and she has been knocking on the door in her last few runs.

“She is a horse we have a reasonably high opinion of and she will go close to getting the job done on Saturday.”

Group One-winning stablemate Enzo’s Lad will be aiming to get his preparation back on track in the Papakura Club 1400, with a start in the Gr.1 BCD Group Sprint (1400m) at Te Rapa next month on the line.

The eight-year-old gelding finished ninth in the Gr.1 Telegraph (1200m) last weekend and Pitman is expecting an improved performance on Saturday.

“Unfortunately, he just fumbled at the start and they went a bit quick for him the other day to stay in touch. Sometimes the old fella, when he gets back in the field, he can be a bit non-competitive.

“We think he went fair enough and it is a big drop in class back to what he races on Saturday.

“I think the 1400m suits nowadays and he gets two kilos off with the in-form apprentice Hazel Schofer. He has got a lot of pluses there.

“We will take a read after Saturday. We were confident he would run a good race in the Telegraph and we were going to push on to the sprint at Waikato if he had done.

“We have had to reassess that since then, but we have options. There is a 1400m stakes race at Riccarton next week and there is still the Group One if he was super impressive.

“We will see what happens on Saturday.”

Golden Harvest will round out the Pitman representation at Trentham in the Taupo Cosmopolitan Club 1200.

“Golden Harvest is a horse on the way up and he has shown a lot of potential,” Pitman said. “We think he can be competitive again, he has drawn (2) to get a nice run.”

Further south on Saturday, Pitman will have two runners in the Listed Liquorland Gore Guineas (1335m) – Lovebug and Tavilight.

“She has always been an on-speed horse, but due to her draw at the Coast she was forced to go back at Kumara and we thought she went a really honest race.

“It was after that run that we decided to push onto the Gore Guineas and she has always been competitive in that company. We are lucky to have Tina (Comignaghi, jockey) to stick with so that has got to be a big asset.

“Tavilight is a work in progress. He has a lot of potential.

“He is a horse who probably wants more ground, he might be suited better to something like Dunedin Guineas (Listed, 1500m). But he is drawn (4) to get a lovely run and if he is near enough to them turning for home then I think he is a really good each-way chance.”

Stephen McKee will have two runners in the Karaka Million 3YO Classic (1600m) at Ellerslie on Saturday and he has Classic ambitions for both horses.

Lord Ardmore finished fourth in the Gr.1 New Zealand 2000 Guineas (1600m) in November and subsequently had the same result at Tauranga earlier this month after being held up in the straight.

McKee has been pleased with his progress since then and he is looking forward to him going around in the rich feature on Saturday.

“He is a horse who has really continued to improve. He is on the upward spiral,” McKee said.

“He went a great race at Riccarton without too much luck and he had a freshen-up after that run and went to Tauranga. He was unlucky not to win that day, he got held up in the running and he has just continued to thrive and improve.

“He has got enough early speed to take a good position and he really finishes strongly.”

“Safely through this one he will have one run at either Waikato or the Avondale Guineas, heading into the Derby,” he said.

Lord Ardmore will be joined on Saturday by stablemate Waimoku Falls.

The daughter of Sacred Falls finished 12th in the Gr.1 New Zealand 1000 Guineas (1600m) in November, and has followed a similar line to Lord Ardmore, resuming at Ruakaka earlier this month where she dead-heated for second.

“She is a filly with stacks of ability,” McKee said. “She is slightly immature at this stage, but the ability is certainly there and I think within the next 12 to 24 months you will see a really good filly.

“She had 10 days out on the way home (from Christchurch) and she has just had a prep run at Ruakaka. She went well and it looked like the run will really improve her, and she has trained on nicely.”

Nominated for both the New Zealand Derby and Gr.1 Al Basti Equiworld Dubai New Zealand Oaks (2400m), McKee said her run this weekend will dictate which path she takes.

“We’re a little bit guarded by what we see on Saturday,” he said. “She is nominated for the Derby and the Oaks. As long as she can take the racing, she will head towards one of those two Classics.”

Both three-year-olds are raced by Go Racing and were purchased from Karaka by Principal Albert Bosma. He went to $65,000 to secure Lord Ardmore out of The Oaks Stud’s draft, and $140,000 to secure Waimoku Falls out of Waikato Stud’s draft.

Ellerslie’s Karaka Million features are among the few major New Zealand races missing from the CV of top jockey Leith Innes, and he’s hoping star three-year-old Aegon can change that this weekend.

Innes has ridden over 1500 winners, including 30 at Group One level – most recently aboard Aegon in the New Zealand 2000 Guineas (1600m) in November.
That son of Sacred Falls is unbeaten in three starts, having also won the Gr.2 Hawke’s Bay Guineas (1400m), and he is gearing up for an eagerly anticipated clash with top-class filly Amarelinha in Saturday’s Karaka Million 3YO Classic (1600m).

Innes was in the saddle for both of Aegon’s black-type victories, and he has been pleased with the gelding’s progress since returning to Murray Baker and Andrew Forsman’s Cambridge stable following a four-week break.

“His exhibition gallop at Ellerslie and his trial win at Matamata last week were both really good,” Innes said. “He seems to have come back really well.

“Obviously the filly is going to be hard to beat this weekend, but I’m very happy to be riding this horse. He’s been super impressive in the Hawke’s Bay Guineas and 2000 Guineas, and he’s definitely one of the best three-year-olds I’ve ridden in a while.”

Innes was happy with how Aegon fared at Wednesday’s barrier draw, landing gate four in a 17-horse field.

“I’d definitely rather have four than 14,” he said. “It’s a nice gate and we should be able to get ourselves into a good position.”

Aegon and Amarelinha were equal $2.20 favourites earlier in the week, but Amarelinha ($2.10) has since moved slightly ahead of Aegon ($2.40). No other runner is rated better than a $15 chance.

Innes also believes he has a live chance in the DoubleTree by Hilton Karaka Million 2YO (1200m), in which he has previously placed aboard Banchee, Riding Shotgun and Felton Road.

His mount this year is the Lisa Latta-trained Brazen Blue, who has placed in two of her four starts to date. That includes a strong-finishing second behind a key Karaka Million rival in her most recent appearance.

“She’s bringing some strong form up from Palmerston North, including a very good last-start placing behind On the Bubbles, who’s one of the favourites on Saturday,” Innes said.

“She hasn’t been around Ellerslie yet, but this is definitely an open two-year-old race this year and I think she has to be among the main chances.”

In the Gr. 2 Westbury Classic (1400m), Innes will ride Familia for owner-breeders Brendan and Jo Lindsay. The daughter of Makfi scored an impressive win at this course in November, beating the subsequent Gr.1 Sistema Railway (1200m) fourth placegetter Packing Rockstar.

Familia’s last start was in the Listed Hallmark Stud Handicap (1200m), where she raced wide without cover before battling on for a close fifth.

“She really likes Ellerslie, and I rode her when she won very well there two starts back,” Innes said. “I think stepping up to 1400m will suit her this weekend.”

“I’ve ridden Gino Severini once before, and that was in a 2000m Group One weight-for-age race last season,” Innes said. “There are probably bigger targets ahead for him later on, and you’d think the 1200m might be a bit short for him on Saturday.

“I think Explosively’s last two runs at Ellerslie have both had a bit of merit, but he’s just had a bit of a tendency to run around a bit. Hopefully he might be a bit better if we can get some cover on Saturday.” 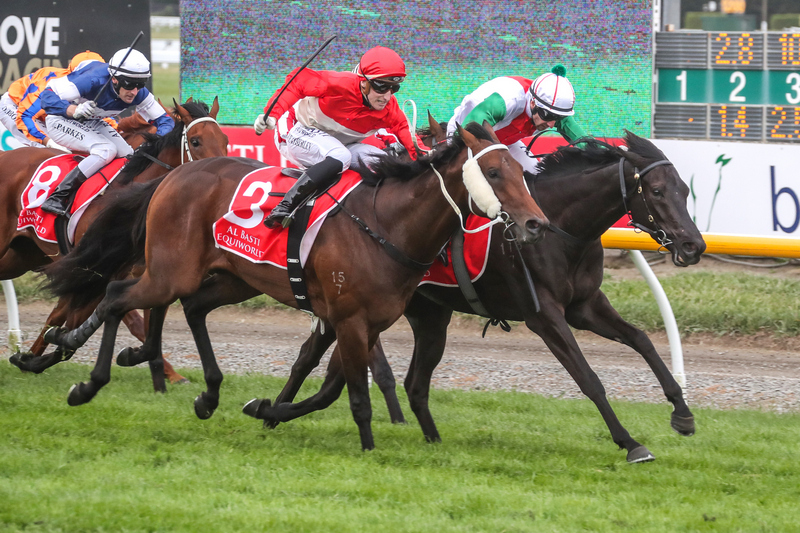