3YO target for Lord Bouzeron

Kiwi import Lord Bouzeron made a successful introduction to Australian racing with a dominant victory against his own age on rain-affected going at Caulfield on Saturday and is likely to be back at the same venue in a fortnight.

Having his first Australian start and first for Cranbourne-based trainer Francis Finnegan, after registering three wins for his sister in-law Chrissy Bambry from 13 appearances in New Zealand, Lord Bouzeron led throughout and scored a dominant 4-1/2 length victory in the  Neds Handicap (2000m).

“I did think he’d need the run, but he is such a hardy, honest and genuine horse,” Finnegan said.

“I was surprised by the margin he put on them, but Chrissy and Tony Bambry were more than confident.

“He is very honest, and he beat a good field and I think a mile and a half in a fortnight will suit him better.”

Lord Bouzeron will stick to three-year-old company as he steps up to 2400m at Caulfield on July 25 and Finnegan revealed the son of Burgundy was initially going to target the Adelaide or Queensland carnivals before COVID-19 hit.

Lord Bouzeron won trials over 1200m and 1400m in June for Chrissy Bambry before being sent across the Tasman to target better prizemoney.
“He hasn’t run since March and he is a real athlete,” Finnegan said.

“He is only a little horse and the three kilo claim of Will Price meant a hell of a lot. I am looking forward to running him again in a fortnight.”

Aiming for the Sky

Joao Moreira rode a treble at Sha Tin on Sunday and he was buzzing after Sky Field put four lengths on the field in the Class 4 Mr Award Handicap (1200m).

The Caspar Fownes-trained three-year-old, who was purchased out of Trelawney Stud’s 2018 New Zealand Bloodstock Book 1 draft, broke his maiden at the third attempt in a manner that points to a bright future.

“It’s been a while since I’ve ridden a nice young talent like him. The best part of it is that he feels like a raw type, that has plenty of improvement still,” Moreira said.

“There are no words to describe what a great feeling you get when you ride such a nice horse.” 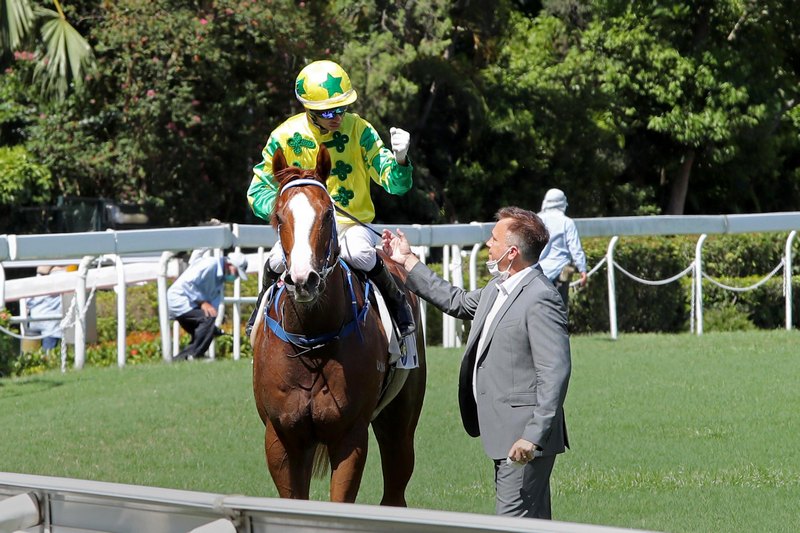 Sky Field is out of the O’Reilly mare Laravissante, a half-sister to former Hong Kong star The Duke.

Moreira took the first of the 11 races - the Class 5 Medic Kingdom Handicap (1400m) with the John Moore-trained Kelmimi Wins and was also successful in the final race on the card with the New Zealand-bred three-year-old Good Luck Friend, a son of Swiss Ace.

Pelvic injury still to be diagnosed for Knight Mariner

Promising three-year-old Knight Mariner was taken to the Gatton veterinary hospital on Monday for further examination of his injured pelvis.

Knight Mariner swept to the lead at the 200m in the Gr.3 Winx Guineas (1600m) on Saturday and looked a likely winner in the Sunshine Coast feature on Saturday until Wapiti kicked back and beat him by a 1/2 length into second.

“As he was going out of the home straight he really went amiss behind.

“We thought it was a possible pelvic fracture but speaking with the vet earlier today it might only be soft tissue now. He is having more tests done on him.

"To be frank, he is one of the most promising horses I have ever trained.”

A son of Tavistock, Knight Mariner was purchased out of Riverrock Farm’s 2018 Ready To Run draft by Gollan in partnership with bloodstock agent John Foote and is out of an O’Reilly half-sister to Group One winner Captivate.