Argentinian newcomer Mesmerizing got his Singapore racing career off to a flier in the $20,000 Open Maiden race on the Polytrack mile on Saturday.

The four-year-old entire by Cosmic Trigger didn’t outrun the strongest field ever assembled, but the manner of the win spoke volumes about his potential.

After a smart break from barrier two, he was never bustled up to go forward, but landed there a little by default with none of his nine rivals keen for the role. 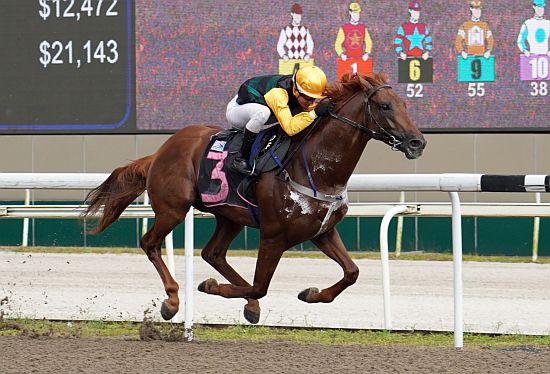 Held off the fence as Rusty Rust (Jerlyn Seow Poh Hui) kicked up on the rails, Mesmerizing still exuded poise and control after he strode to the front from the first bend into the backstraight.

Even when Golden Tiger (Saifudin Ismail) whipped around to poke his nose in front, Leslie Khoo’s and the Toast Trusts’ new charge was still coasting comfortably, albeit the lather of sweat foaming off his breastplate might suggest otherwise.

The real qualities came into the equation the moment Wong went for him upon straightening. In a few skips, he left Golden Tiger as well as the menacing Great Expectation (Marc Lerner) battling in his wake.

The final margin on Great Expectation was just a little under five lengths while Golden Tiger stayed on for third place another two and half lengths away. The winning time was a moderate 1 min 41.18secs for the 1600m on the all-weather.

Known as Personal Skill in Argentina, Mesmerizing has certainly lived up to his previous record of one second (2000m) and three thirds (1500m to 2000m) from six starts with that gapping win.

Khoo, however, said a swallow doesn’t make a summer.

“He showed a lot of ability today, he’s a nice horse, but he beat quite a lousy field. So, we cannot judge him on that run alone,” said the former top jockey.

“He’ll probably run in Class 4 next. We’ll then have a better idea.

“Turf or Polytrack, it all depends what races are available, but he’s definitely a horse who needs more distance.”

Mesmerizing was imported by the Toast Trusts & Mesmerizing Stable alongside another South American-bred entire, a Uruguayan-based Brazilian-bred, Sing Our Song. The duo even trialled together on August 26 with the boom clearly on Sing Our Song after his win, more pointedly on his impressive Uruguayan record of three wins from only four starts.

Sing Our Song was well backed at his debut in a Class 3 speed dash two weeks ago but as it turned out, he could only manage an eighth place while Mesmerizing ($31) scored in a canter.

After saluting earlier on Star Jack (see earlier report), Wong was ringing up a riding double to continue his great run, but was unfortunately stood down after that race after he complained of back pain.