The Chris Waller trained Nature Strip under James McDonald climbed the mountain at Randwick on Saturday winning the 2021 renewal of the $15m, TAB Everest (1200m) with the result mirroring the Group 1 TJ Smith Stakes back in April with Masked Crusader second and Eduardo third.

Nature Strip was fourth in his first attempt at The Everest in 2019 and seventh last year. However, on Saturday he confirmed his place as the world’s best sprinter taking the race with a commanding performance from start to finish.

McDonald had Nature Strip out from barrier ten to the lead as they went across the High Street side and turned for the run home with a strong south-westerly tail wind down the home straight. The three-year-old Home Affairs and Glen Boss led the rest of the field with Eduardo and Nash Rawiller next.

McDonald sprinted Nature Strip off the top of the hill and that secured a 2L buffer crossing the 300m. They would need all of that at the business end. Home Affairs faded and Eduardo and Rawiller chased hard through the 200m and 100m. Classique Legend and Kerrin McEvoy came down the outside of the field and then Masked Crusader and Tommy Berry emerged sprinting hard.

The margin rapidly closed with McDonald asking Nature Strip to maintain his momentum against the swiftly arriving challengers and he did with the winning margin a long head.

Masked Crusader (Toronado) and Berry were a half-neck in front of Eduardo (Host) and Rawiller with Lost In Running (NZ) and Classique Legend 1 1/2L back in fourth and fifth. 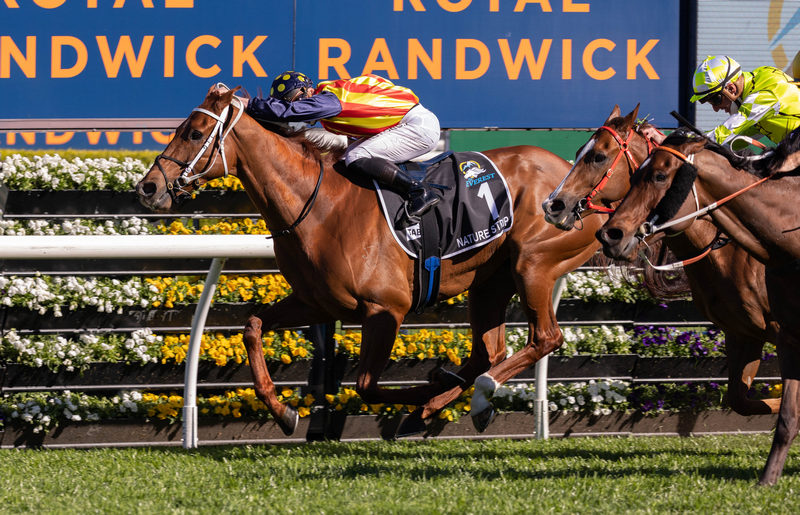 “I am getting a bit emotional for a change. It is just a great race. It has captured the imagination of so many people, inside racing and out and what better way to get out of Covid,” said Waller.

“I just did not panic really. We kept it pretty simple. We obviously started later with him and he did the rest.

“We all are close. My team at home, not just with Nature Strip but with the whole team. Stewart, who rides him work and Gary who is strapping him today because Stewart cannot be here. It is a great story and that is what our team is about, work away and win some big races.

“He got the highest rating sprinter in the world for a reason and that gave me some confidence. He has probably justified it today.

“I have never woken up in the morning and been so confident. Even though he has just got there. The man who trains it is just an absolute master. I do not know what he does, he is just a freak of a trainer. The horse is a star. I knew we would see something really good today. The build-up has been so good. Everyone one has wiped him off having run in it three times and hasn’t done any good. It’s been different this time around. The horse gives his all," said McDonald.

“It is the only one that has been alluding him. He has been a consistent performer all the way through. I think they hit the nail on the head earlier in the week as his last six runs he has been thereabouts. He is a Grand Final performer. That is what the trainer is, that is what the horse is and he has done it today.”

“I had goosebumps thinking about it last night. I truly believe this was my time to shine and the horse’s time to shine. Everything is too good to be true at the moment. The rain was dropping from the sky. When the track came up a Soft 5 I thought OK. But he is so adaptable. The best sprinter in the world,” he said.

Jack Van Durren was the fortunate sole owner on-course to witness the win with covid restrictions ensuring that the rest of the ownership group has to celebrate away from Randwick. 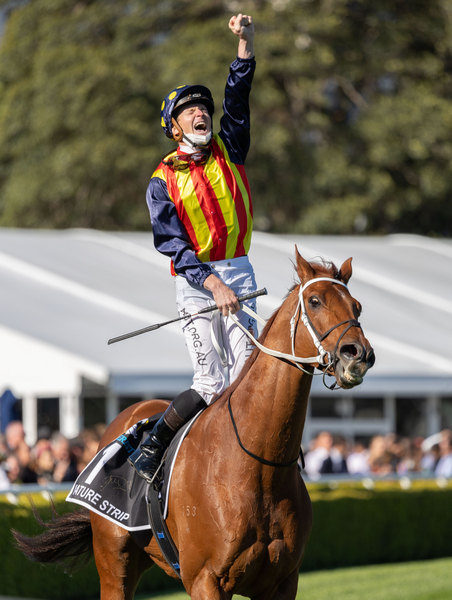 Nature Strip is not so sure about the celebrations, picture Sportpix.com.au

Kerrin McEvoy (Classique Legend): “He’s run well. Got back further than what I thought he would. The pace was strong. Got into the three wide line to move into it. He gave his best effort. We just came up a little bit short this year. Les has done a great job with him.”

Nash Rawiller (Eduardo): “He went outstanding. Ran his heart out. Couldn’t ask for any more.”

Jason Collett (Gytrash): “I was disappointed with the performance. He had the right run to be in the finish. Didn’t find when asked.”

Josh Parr (Trekking): “Terrific effort. They went fast and kept running. That levelled him out the last but it was a terrific effort.”

Tommy Berry (Masked Crusader): “Just cost himself at the start.”

Tim Clark (Wild Ruler): “He had to do a bit of work early. Was found wanting late.”

Regan Bayliss (The Inferno): “We followed Classique Legend. We travelled really nice, got into a nice rhythm. When the pressure came on he just dropped the bridle for me. They aren’t making a huge lot of ground today. I thought he was honest.”

Hugh Bowman (Lost And Running): “Just delighted with him. Presented to perform at his best on the day and he’s delivered.”

Sam Clipperton (Libertini): “I thought her effort was sound.”

Glen Boss (Home Affairs): “Unfortunately he came off the bridle very quickly as we straightened. He didn’t have a lot to offer which really surprised me. He is a far better colt than that.”