It was a win-win for trainer Christophe Clement as Mutamakina and La Dragontea went one-two in another thrilling renewal of the Grade 1 $602,000 E.P. Taylor Stakes, Sunday at Woodbine.

Despite a gutsy win in her last start, the Grade 2 Dance Smartly Stakes, Mutamakina, the five-year-old daughter of Nathaniel-Joshua’s Princess, was somewhat ignored on the toteboard as the 8-1 sixth choice.

At the end of the 1 ¼-mile turf classic, she was tops where it counted the most, albeit barely.

It was 5-2 choice Kalifornia Queen (GER), one of three (defending champ Etoile and Great Island) Chad Brown trainees, who assumed early command around the first turn, emerging with the lead and then taking the field through a leisurely opening quarter in :27.26 over the yielding ground. Mutamakina, with Dylan Davis again in the irons, kept close tabs on the pacesetter, as European invader Waliyak and Family Way sat just off the top duo.

Kalifornia Queen continued to dictate the proceedings through a half in :54.56, as Davis kept Mutamakina to task in second position.

After three-quarters run in 1:20.84, Kalifornia Queen and Flavien Prat began to quicken, prompting her rivals, including Mutamakina, to do the same.

As the field straightened for home, Kalifornia Queen was engaged by Mutamakina, while Waliyak looked to collar the leaders with an inside bid and La Dragontea, seventh at the stretch call and rolling, started to make some serious headway on the far outside.

At the wire, Mutamakina bested a hard-charging La Dragontea by a neck, giving Clement a one-two finish and his first E.P. Taylor crown. Kalifornia Queen was third, one length ahead of Waliyak.

“She ran well over here about a month ago and we saw an opportunity again to bring her out here,” said Davis. “Christophe, first off, did a great job of getting her here. I've been breezing her, setting up for this race, and she's been breezing well and maintained herself and we knew that she would be tough coming here.”

“She handled everything great,” praised Davis. “Last time she put herself in a great position laying second. Today, again, she got her nerves going a little bit more than previously, but she put herself in a great position putting herself second. We slowed down the pace and she was handling it well for me and I just needed her to finish strong. Once she got a head in front there at eighth poll she was digging in nicely. She handled the turf well today.”

Bred in Great Britain by Widgham Stud, Mutamakina is now 5-3-3 from 16 starts. 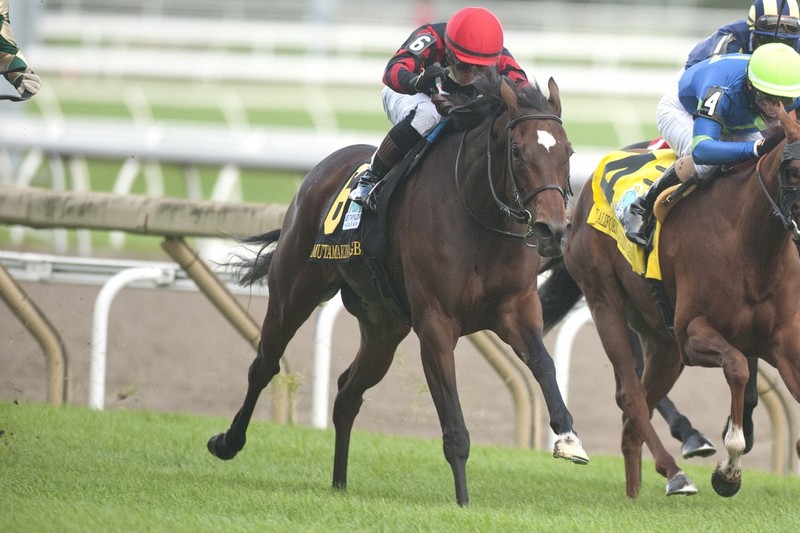 Avie’s Flatter looks like a million dollars in taking Nearctic

Avie’s Flatter, under Luis Contreras, finished with a flourish to win the Grade 2 Nearctic Stakes and in doing so, reached the $1 million mark in career earnings, Sunday at Woodbine.

The $281,800 Nearctic, a six-furlong turf stakes for three-year-olds and upward, attracted a competitive field of 10.

Avie’s Flatter, Ivan Dalos’ homebred five-year-old star, was at his very best in adding another stakes victory to his impressive résumé.

Sent off at 7-1, the bay son of Flatter arrived at the Nearctic off a ninth-place finish in the Grade 1 Ricoh Woodbine Mile on September 18.

Under the tutelage of Canadian Hall of Fame conditioner Josie Carroll, the bay was back on track and back in the winner’s circle on a cool afternoon at the Toronto oval.

It was Momos, under Patrick Husbands, who grabbed the early the lead, as Woodbine Mile champ Town Cruise shadowed the pacesetter through an opening quarter timed in :22.72, with Avie’s Flatter positioned fourth by Contreras.

Momos remained a head in front of Town Cruise through a half in :45.95, with Avie’s Flatter moving into third, followed by Turned Aside.

With a burst of speed, Avie’s Flatter took command to lead Momos by a length at Robert Geller’s stretch call. Olympic Runner, well back for most of the race, began to roll on the far outside in a bid for a podium finish.

At the wire, Avie’s Flatter secured a half-length victory over a game Turned Aside. Olympic Runner was third, besting Momos by a neck for the show award.

“He handled it perfect,” said Contreras. “I got a great trip and I'm so happy with the way he ran. I got a nice trip in the backstretch, and I was loaded the whole way.”

Avie’s Flatter, whose other stakes scores include the Grade 3 Transylvania, Coronation Futurity and Cup and Saucer, paid $16.50 for the win.

“This is a good horse,” praised Carroll. “This horse, from the time he was two, every year, he shows up and gets it done. We have him back to sprinting now and he's thriving on it. It's wonderful. This horse is kind of a barn favourite so it's very special for all of us when he wins.” 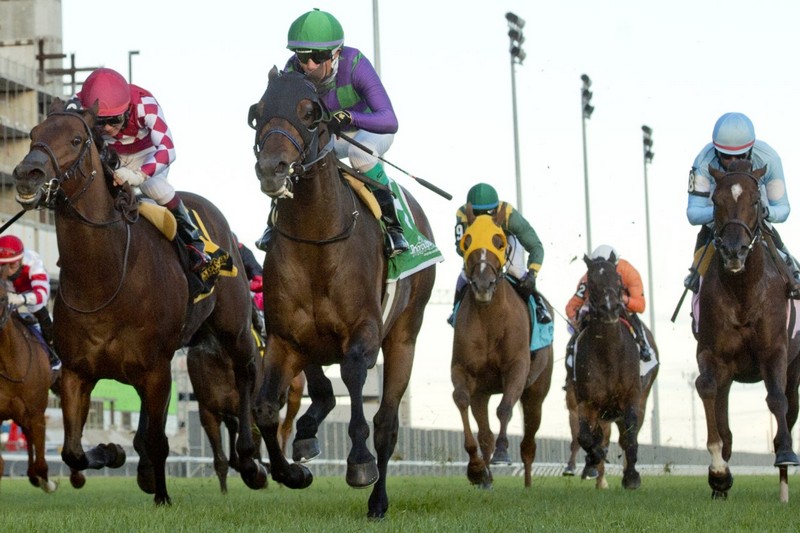