In a fitting tribute to late prominent horse owner Yong Nam Seng, one of his Gold Stable wards, Gold Kingdom saluted at Kranji on Saturday.

The 92-year-old, who was the chairman of local construction company Woh Hup, passed away last Saturday. The avid racing fan ran one of Singapore’s oldest stables with its easily recognisable gold and red diamonds silks carried to many victories by the likes of Hot Gold, Gold Strike and Magnificent Gold.

After having had horses with trainers like Teh Choon Beng, Arnaud de Moussac, Dr Yeoh Kheng Chye and his brother Sonny in the past, Yong had been supporting mainly trainer Cliff Brown, and his former assistant Tim Fitzsimmons of late. 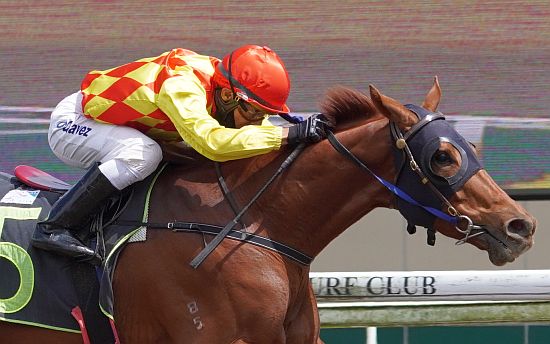 Prepared by Brown, who on Tuesday delivered the big news he was leaving Singapore in March, Gold Kingdom ($29) blew his rivals away with an emphatic four-length win in the $30,000 Class 5 race over the Polytrack mile. The winning time was 1min 38.4secs.

“He was a wonderful man. He supported me from the moment I got here,” said Brown.

“He’s a terrific owner, very generous and a very caring guy. You don’t meet many like him.

“Our families became good friends. We often had dinners together, and my son Harvey told me one day that Mr Yong has always done the right thing by us, and he was right.

“Mr Yong died last Saturday, but we didn’t have any runners for him then. This win today is for him.

“The good news is the Gold Stable will still carry on, Mr Yong’s legacy as a racing fan will live on.”

Kranji racegoers will of course remember the days when Mr Yong would grace the Club of his presence despite his advanced age, helped along by his son Eugene.

Though winning jockey Oscar Chavez has been part of the Bukit Timah and Kranji furniture for years, he said he has only ridden a handful of winners for Mr Yong.

The Panamanian-born jockey also dedicated Gold Kingdom’s win to Mr Yong’s memory, but had to, on top of that, cope with the mixed feelings of booting home a second winner for Brown (In All His Glory was their first winning combo since Chavez was relicensed after three years), while knowing the clock is already ticking before the promising association is over.

“I think I only rode a few winners for Mr Yong, but it was an honour to ride one for him and the family today,” he said.

“But I would like to say that to come back after so long, and have Cliff being so good to me and supporting me from Day 1, was amazing, but now to hear he was leaving just makes me very sad.

“Just when it looked like we were clicking very well, he leaves, but life has to go on. I hope we can continue to have more wins until he leaves.

“Hopefully I still get to ride his horses when they go to other trainers, like Mr Yong’s horses for example.

“This has come at a bad time for me, but at the same time, with so many jockeys leaving, I have to make the most of the opportunities. I’m here to win as many races as possible.”

A five-year-old by Animal Kingdom, Gold Kingdom has now taken his record to three wins and 10 placings from 28 starts for prizemoney that has now tipped over the $100,000 mark for the Gold Stable.