The Japanese raider with the most fitting of names carried Joao Moreira to his fifth LONGINES Hong Kong International Races win – soon to be six – and his first since he guided Satono Crown to a thrilling Vase score in 2016, also for Japan.

“He ran amazing; the emotion is getting the better of me but that’s what it’s about, winning big races, and today we’ve got another one. To come back and win on a Japanese horse, it makes it all worth it,” said Moreira, who left Hong Kong for Japan for a short while before returning full-time to his adopted home city this time last year.

The 2018 Vase champion and big local hope Exultant strode on from his wide gate to lead the field at the first turn under Zac Purton as Moreira settled his mount into a smooth locomotion a couple of lengths off the pace.

Three-wide off the home turn, Moreira switched to an inside alley as Exultant made for home. Glory Vase, G1-placed but not a winner in that grade before today, quickened to lead at the 200m mark and kept on going, drawing three and a half lengths clear at the line in a swift time of 2m 24.77s. 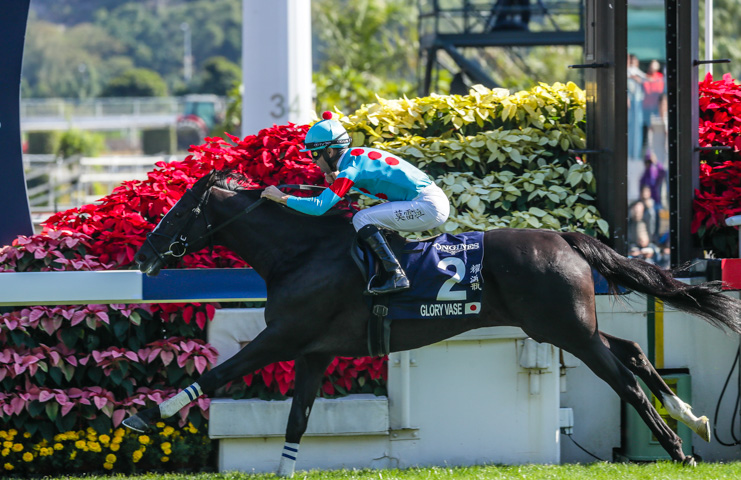 “I was quite blessed to get in two off the fence, get cover and get him to relax,” the rider said. “I had horses on top of me at the 800 metres but good horses, if they face a tough situation, they just go through with it and he wasn’t any different.

“He just kept himself in the gap and just before we turned for home I was kind of trapped and had to ride for luck. I sneaked on the inside and hoped the gap would come. Fortunately it did.

“When I got the gap he just dashed from the 350 (metres) and I knew I was the winner because I had plenty of horse underneath me and he was just attacking the line as a really good horse would.”

The Brazilian ace was ebullient in victory, beaming and waving to the appreciative crowd and his cohort of fans waving Japan flags and marker pens in the hope of a coveted autograph. Moreira obliged as many as he could.

“It’s a pleasure. It’s always good to win these big races, it’s always going to help your confidence and I’ll be riding the rest of the races with even more confidence knowing that I’ve got good rides,” he said, before making it a four-timer by mid-card with a late-thrusting win aboard Beat The Clock in the second of the majors, the G1 LONGINES Hong Kong Sprint.

“I’m overwhelmed,” he said as his Deep Impact four-year-old walked back to unsaddle and have the winner’s sash clipped around his neck.

“Moreira did an amazing job riding the horse. We had a meeting together yesterday and felt good about our chances.

“The plan was to come here, we’ve been targeting this race because we felt the track would suit him and the owner was happy to come. Winning international races like this, this is my job as a trainer, this is the best.”

“She was beaten by a better horse,” Soumillon said.

Purton felt the wide draw was too much for Exultant.

“The barrier (14) was always going to make it difficult, so it was what it was. He tried his best and ran well,” he said.

Moreira had a LONGINES HKIR double previously in 2014 when Able Friend won the Mile and Designs On Rome took the Cup.