Moreira and Purton take three each

Championship leading jockey Joao Moreira bagged a treble, as did current champion jockey Zac Purton, starring on Wednesday night’s fixture at Happy Valley with six wins between them as two of only three jockeys to win a race on the card.

Moreira kicked off evening with Frankie Lor, but closed it out with powerful ally Caspar Fownes aboard Royal Racer in the Class 4 Tsing Lung Tau Handicap (1650m).

“I said to Caspar (Fownes) it wasn’t a pretty ride but very efficient because I had to come wide at the last corner but I knew what I had underneath - I had a full horse underneath.

“I pretty much looked after him in the first half and when I pulled him out and asked him to get going he responded very well and he ran away from them,” Moreira said.

Moreira’s three-timer featured a win aboard Ambitious Heart for trainer David Ferraris in the first section of the Class 4 Tai Lam Handicap (1200m).
Meanwhile Purton, the reigning champion jockey, kicked off his treble in the first section of the Tsing Lung Tau Handicap (1650m) aboard Total Power for trainer David Hall. The win was the jockey and trainer’s fourth together this term. 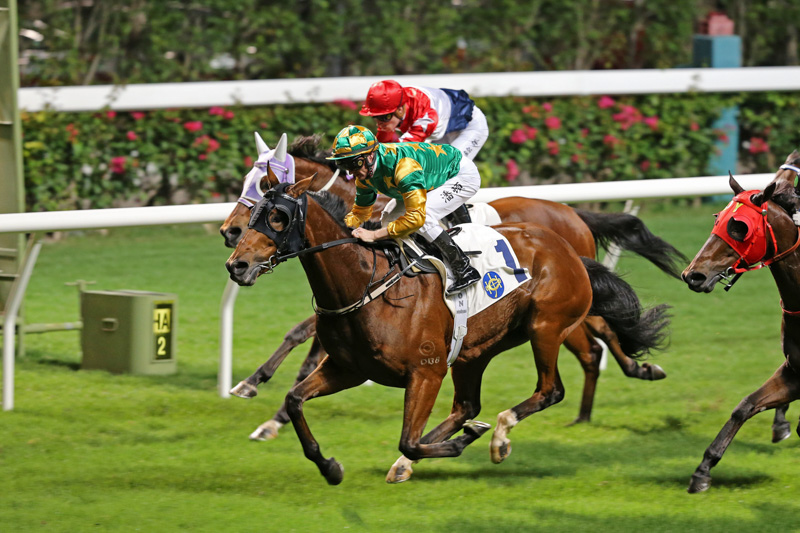 The five-year-old bay spent the off season at Conghua and bounced into the winner’s enclosure following two trials at his 11th Hong Kong start.

“He’s another horse that we have had in Conghua, he had his first trial there and I think it certainly hasn’t hurt him,” Hall said.

The Dundeel gelding was a two-time winner pre-import, also placing at Listed level in the Inglis 3YO Guineas at Scone Racecourse to Wild Planet, who subsequently won the G2 Theo Marks Stakes (1300m) at Rosehill Gardens Racecourse.

“Every horse that has come back from Conghua has performed really well for us so we’re really happy with the way things are going up there and it certainly contributed to him winning first-up over 1650m with 133 pounds on his back,” Hall said.

“All the preparation work was done at Conghua so another tick for the team up there and also the facilities,” Hall said.

A well-judged front-running ride from Purton followed in the Class 3 Kap Shui Mun Handicap (1200m) aboard the Danny Shum-trained Grateful Heart, who made all for a tidy half-length success.

“He’s just taken a little bit of time to strengthen up, he showed some ability in his early trials but under race pressure he was a little bit weak,” Purton said. “This season he’s had the benefit of the off season and like a lot of horses he’s just come back better for it,”

Purton closed out his three with victory in the finale aboard ex-John Gosden trainee Holy Heart who scored back-to-back wins at the Valley, taking the Class 3 Sham Tseng Handicap (1650m) by a neck.

Neil Callan’s recent run of form has paid dividends with the Irishman earning the coveted sixth and final spot on the Hong Kong team for the LONGINES International Jockeys’ Championship on 9 December at Happy Valley.

The 42-year-old landed six wins from the previous four race meetings to lift his haul to 11 for the term.