Trainer Alan King enjoyed his second Group-race winner of the Qatar Goodwood Festival this year with Asymmetric in the G2 Unibet Richmond Stakes (1200m) on Thursday. 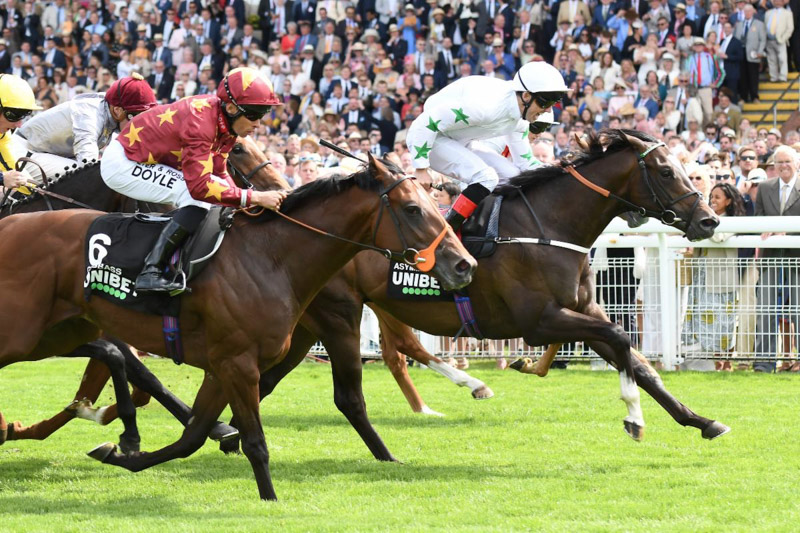 Already on the board with Trueshan in the G1 Al Shaqab Goodwood Cup, King showed he can do it with speedy juveniles too, saddling 11/4 favourite Asymmetric to an impressive success in the six-furlong contest.

Jockey Martin Harley had to wait for the gaps to appear, but when they did Asymmetric quickened smartly to sprint ahead of his six rivals. Khunan (16/1) took second, beaten a half-length, with Gubbass (4/1) a nose further back in third.

King said: “I think I burnt out most of the nerves on Tuesday with Trueshan. I hoped and thought Asymmetric would run very well today. I wasn't thinking he had to win this whereas I thought Trueshan had to on Tuesday.

“Asymmetric has the most wonderful temperament. He's almost horizontal he's so laid back. He has a fairly good turn of foot when he does go too.

“We were always going to step back and take a lead on him. I was just hoping they wouldn't get first run on him.

“He picked up very well. Martin was very happy with him and was going to have one crack at them. They went steady early which was something I wasn't sure about.

“Asymmetric is not the biggest, but I think he is just sharper for the July Stakes. He does nothing at home, he eats and sleeps. You give him the odd nudge in the morning just to make sure all is good.

“Martin rode him on Tuesday morning and was very happy. Luckily, the ground has dried out a bit. He can go on soft, but we think he is a better horse on top of the ground. Martin said he gives him a much better feel on faster ground.

“I've no idea where he goes next. He's in the Gimcrack, he's entered in the Prix Morny in France. We'll see what the team want to do."

Harley said: “That was very exciting. Asymmetric travelled good and just when I asked him for a gear change, he went from second to fifth, which helped me out a lot!

“I wasn't worried because I rode this horse in a novice race at Newmarket and they went very steady.

“Even on his work at home, you can produce him whenever you want. He has an incredible turn of foot and he showed that today."

Richard Fahey, trainer of Khunan and the fifth Perfect Power, said: “Perfect Power missed the kick and then we were on the back foot. Things did not go right for him, the opposite for Khunan. I think Khunan is a six-furlong horse, and he is not a bad little horse. Everybody is happy. We will be looking at the Prix Morny and he is in the Gimcrack.”

Khunan’s rider Hollie Doyle said: “It was a massive run. Me and Adam had an easy time of it on the front end. Khunan hit a flat spot but then he quickened up really well. He feels like a six-furlong horse.”

Asymmetric breaks through to land the Group 2 @UnibetRacing Richmond Stakes in the hands of Martin Harley for trainer Alan King 👏#QGF #GloriousGoodwood pic.twitter.com/3qlXXanJqy