An enviable run of success enjoyed by Prime Thoroughbreds, Patrick Payne and Billy Egan continued on the very first day of the new 2020/21 racing season when Miss Devine Em (by Super One) scored a narrow victory in the $135,000, MVRC Remembering Andrew Gilbert & Gavin Lisk Handicap (1000m) at Moonee Valley in Melbourne.

An owner-trainer-jockey combination immediately associated with last season's $1 million earner Rubisaki, the colours of Prime Thoroughbreds were also carried to notable success by the John Thompson-trained Fituese late in the previous racing season.

Carried on this occasion by Miss Devine Em, the diminutive daughter of Super One aimed for her third straight victory in today's contest and managed to get her head in front of a wall of horses to ring up a hat-trick.

In what amounted to a blanket finish to the race, Miss Devine Em scored by a head from the fast finishing Wide Awake (by Not a Single Doubt) in second, Miss Bosetti (by Snitzel) in third, Clean Machine in 4th, Seeress in 5th and Peggy Selene in 6th.

Significantly, no more than three-quarters of a length separated the first half-dozen fillies to finish, with Miss Devine Em just managing to gain a slight advantage in the shadows of the post to score — thanks mainly to another masterful ride by her partner Billy Egan. 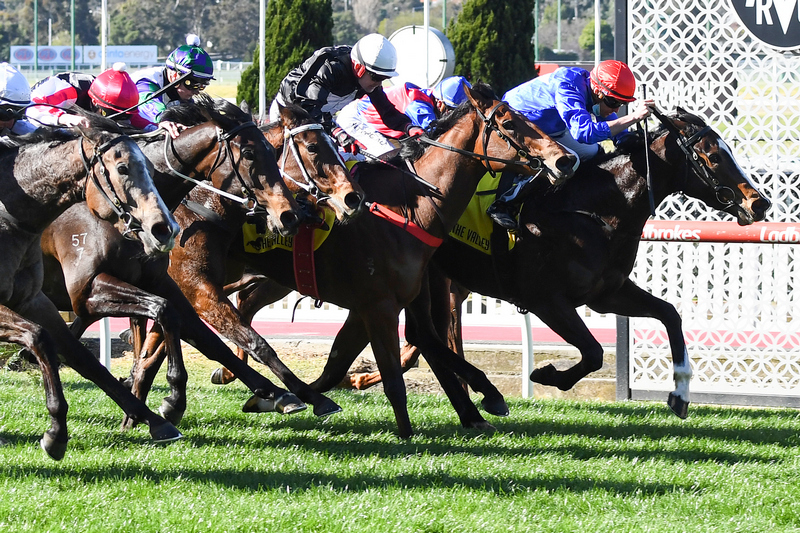 Speaking immediately after the win, Egan was keen to deflect any praise and gave credit to the trainer.

“It was a good win,” declared Egan. “Patrick has done a really good job bringing her on slowly… brought her through the grades nicely.”

“It was very good for her to get some Saturday city class on her side (CV).

Remarking in direct reference to the actual performance, Egan claimed: “She was quite lost getting around the turn here today. She’s usually quite a fluid-going horse, but just got a little lost and waited for them a little bit.”

A winner at Donald and Murtoa at her previous two outings, Miss Devine Em has now won three of her four career starts and just short of $100,000 in prizemoneny. Or $98,213 to be exact.

Speaking by phone after the win, winning trainer Patrick Payne said: “She toughed it out, but I think she was a bit lucky to win. The horses closing were unlucky not to get her.

“I’m not sure what we’ll do next but I won’t be too ambitious.”

In a race with more than one hard luck story, the performance of the runner-up Wide Awake warrants due recognition. Ridden towards the rear in the early stages, the Dabernig-Hayes trained filly was angled for a run around the field on the home turn before finishing strongest in the straight for the closest of seconds. The bonny grey filly was arguably responsible for the run of the race.

In the end however, Miss Divine Em officially scored by a Head from Wide Awake, who in turn was just a Short Half-Head clear of Miss Bosetti in third.

Winning time of the race was 1m00.18s (last 600m in 35.76s), an overall mark which was acutely faster than that recorded by Hard Landing over the same course and distance one race earlier.

While the closeness of the margins confirm that the first six fillies home were all obviously well-matched, the performance of Esta La Roca (NZ) probably should not be taken on face value. The robust daughter of El Roca was caught on the fence with nowhere to go over the closing stages and probably should have been another runner to have fought out the finish.