Kiwi trainer Donna Logan is sticking to the same recipe of a low-key start for Minister as the Kranji Mile winner kicks off his new Cups campaign with a 1200m sprint first-up this Sunday.

When the Street Sense five-year-old had his first start for Logan at Kranji, coming off a four-month break during which he was transferred from his former handler Lee Freedman, it came in a similar 1200m contest in Class 2 company.

Logan also put her apprentice jockey Fadzli Yusoff up, with the middle-distance performer finding the race too sharp, as half-expected. 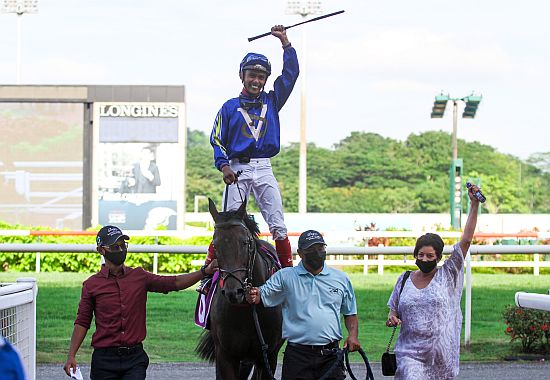 The result – 10th to Lim’s Lightning – in itself meant little to Logan. It was only part of a journey towards the destination.

Minister had one more warm-up, and over the more suitable 1600m. With regular partner A’Isisuhairi Kasim taking it from there, he duly improved with a fourth place to Sacred Croix, and we all know the happy finale one month later on May 22.

The milestone of a first Singapore Group success is now ticked off, but Logan, a winner of 60 Group and Listed races in New Zealand, is not one to sleep on her laurels.

While she can rely on other Group race material like Makkem Lad and Super Dynasty in her yard, Minister will again be the driving force, especially towards the ‘Big Three’ formerly known as the Singapore Triple Crown (not in the running this year) series coming up, the Group 1 Raffles Cup (1600m) on September 18, the Group 1 Queen Elizabeth II Cup (1800m) on October 16 and the Group 1 Singapore Gold Cup (2000m) on November 14.

“Just like for the Kranji Mile, Minister is running in a 1200m race first-up. I have no expectation other than him running a comfortable race and pulling up safe and sound,” said Logan.

“This is just a stepping stone towards the Raffles Cup. I will follow the same programme of trialling him before each lead-up race and the Raffles Cup itself.

“He’ll run in a Class 1 1400m (on August 22) next, with a trial before, and trial again before heading into the Raffles Cup.

“He’s a tough horse, but he can put on condition relatively easily. He used to be quite naughty at home, but we’ve come on top of that, especially when he’s fresh coming off a break.

“He tends to go back to his old tricks when he’s fresh, though, but once he’s a lot fitter, he’s a lot more pliable.

“Like at his first run last prep, Yusoff will ride him. Just like Harry (A’Isisuhairi), he knows the horse exceptionally well, like he knows Makkem Lad inside out.

“As I didn’t want to flatten him with 58kgs in a 1200m race, the three kilos off will help him, but it seems the rest of the field had the same thought – nearly all have an apprentice on.”

One of them happens to be her own – Makkem Lad who will be partnered by arguably the most-improved young rider this season, Ricardo Le Grange’s apprentice jockey Krisna Thangamani.

“It’ll be interesting to see how the apprentices go as there will be a lot of speed in the race. A lot will depend on the tactics,” she said.

“Fame Star will lead, and Makkem Lad and Kharisma will also be up there, while that will make it easier for the older horses to finish off.

“I’m hoping Krisna can do his homework. Anyway, Makkem Lad is not hard to ride.”

Winning form is good form, thought Logan. The Kuroshio five-year-old beat a smart Class 2 field in a 1200m race two weeks ago, but when Logan saw how the seven-time winner was bucking his brands off, she threw him back in the arena.

“Makkem Lad pulled up exceptionally well. I know it’s only two weeks since he ran, but we’re taking the opportunity of the fact he pulled up so well,” said Logan who has always had a soft spot for the small but big-hearted speedster.

“Again, it won’t be the easiest of race, but the apprentices will have to use their heads.”

Logan saddles another ex-Freedman in the race, Super Dynasty. The bold frontrunning Fastnet Rock grey has had only one run under her regimen when he tried to make all in a Polytrack mile Class 2 race on March 6, but knocked up to finish out of the placings.

In the same mould as Minister, Super Dynasty, a seven-time winner (1400m to 1600m) who did contest a few Group races for Andre Lim of Super Easy fame in the past, is resuming, with a potential stab at the same feature races in the offing.

“It’s the same for him, it’s a first run this preparation going forward,” said Logan.

“We need to get some race fitness back in him. I may look at the Raffles Cup for him, even if the weight-for-age conditions don’t make it easy for him.

“But at the top end, there’s not a lot of options.”

A’Isisuhairi, who, in concert with Logan, was all for the idea of giving up the Minister ride to Yusof this Sunday, is the one booked aboard Super Dynasty, a horse he knows relatively well for having teamed up with early doors – twice for two unplaced efforts.

But obviously not as well as Minister, who rewarded the Malaysian lightweight jockey for all his had graft on the gelding with his second Group 1 winner after Gilt Complex in the Raffles Cup for Cliff Brown in 2017.

“Donna and I discussed and I was happy to let Yusof ride Minister instead this Sunday, especially as he is coming back and will carry a bit of weight” said A’Isisuhairi.

“The three-kilo claim will help him. The trip is also short, but I can tell you the horse is fit and ready to go from what he showed me in his barrier trials, especially after the second one (last Thursday when fifth to Sure Will Do).

“My focus will be the ride on Super Dynasty this Sunday, and I’d like to thank Donna for still giving me another ride in the race.

“The 1200m is too sharp for Minister, but I believe he can still run a solid race. He’s come back different and a lot stronger after the break.

“His confidence level is higher even if he’s still a hard horse to get around, like this morning.

“Lately, he seemed to handle his work better, but he can still be a problem to gallop especially when he gets his fitness back up.

“I know his character. He’s really smart; to get him around, you must try not to get too bossy.

“But once he races, he’ll settle better. He needs to race as he’s just too well, we need to take the edge off him.”