The DBS x Manulife Million Challenge comes to a close on Wednesday at Happy Valley and there are sure to be fireworks with the three top contenders all in action and shooting for the HK$650,000 first prize.

The annual DBS x Manulife Million Challenge is a points-based contest for horses competing in races rated Class 3 and above at Happy Valley, with 15 points for a win, six points for second, four for finishing third and three for fourth. This season’s HK$1 million competition commenced on 11 September, 2019.

Shining Ace heads to the finale in pole position with 53.5 points; Gentle Breeze in second has 45 points, while Flying Quest currently sits third on 43 points.

Wednesday’s winner’s cheque has been a long-time aim for Ricky Yiu with his galloper, Gentle Breeze but the five-year-old faces a stiff test as he aims to prove his worth over 1200m in the Class 1 Blue Pool Handicap and overtake Shining Ace – only a win will do.

“He’s trying hard to win the Million Challenge and get the trophy because we’ve targeted this for a long time, especially as tomorrow night is his last chance,” Yiu said.

The Foxwedge gelding has climbed an impressive 27 points in the handicap this season, winning three of his six starts under Matthew Chadwick who takes the reins again. But they all came over 1000m.

Gentle Breeze’s 1200m form reads for one placing from six attempts but Yiu quashed any apprehensions about his galloper’s ability to handle the added furlong.

“There are no concerns about the 1200 (metres) especially the way he finishes off his races over 1000 (metres), so hopefully he can do something for us – as he has been very loyal to me,” Yiu said.

“He still hasn’t done anything over 1200 (metres) but he has a good draw (gate one) and he’s holding his form so I expect he’ll run well. He did a bit too much work early last time and the draw wasn’t very good.”

The five-year-old sports the silks made famous by Yiu’s World Champion Sprinter and Hong Kong Horse of the Year (2009/10) Sacred Kingdom.

“We target the Million Challenge for owners, it’s a good bonus but especially as Happy Valley tends to be slightly weaker fields than Sha Tin,” Yiu said.

“Gentle Breeze has done well, he’s won three this season and five overall since arriving to Hong Kong as a PPG (Privately Purchased Griffins), especially at the Valley.”

Chadwick agreed that Gentle Breeze should be able to handle the rise to 1200m, especially now with the inside draw on his side.

“The wide gate last start compounded the problems; we felt the 1200 (metres) he could get because he’s shown that he’s versatile - he can sit handy and he can also sit off them and show his turn of foot,” Chadwick said.

“He had to work overly hard early as there was just too much pace inside of him and he just had to use a bit more energy to cross them from the wide gate.”

The 29-year-old rider has been impressed with the gelding’s quick turnaround of form this season and remains optimistic ahead of Wednesday’s test as he seeks an easier run in transit.

“He’s a very consistent, honest horse - he’s found his feet nicely this season and he’s come back more settled as we have always thought that it wasn’t necessary for him to lead and that if he took a sit he should be relaxed enough to see it out,” Chadwick said.

“Unfortunately last time he drew fairly wide and we had to use that extra gear to get him across and against a horse (Amazing Star) whose front running style is to jump and run along - it just dragged a fair bit out of us and with the heavier weight it compounded all of the misery on top of us.”

A winner of five from 20, the gelding faces Class 1 for the first time as looks to secure the DBS x Manulife Million Challenge for connections.

“There are a lot of horses running again and it looks like the standings can change a lot depending on the results,” Chadwick added.

“He’s obviously very consistent and very honest as his record shows - I trialled him last week on the dirt and he trialled brilliantly, he felt really good, he’s in great form and he’s made his way nicely up the ratings this season with his good record and hopefully it can continue,” Schofield said.

The Australian-bred gelding’s consistency has come to the fore this campaign having finished in the top three in each of his eight runs, including two wins, one of which he shared in a thrilling dead-heat with Aurora Pegasus.

“I’m a touch disappointed with the draw as he drew wide, but hopefully there’s a lot of speed, they split up and then we can slot in somewhere,” Schofield said.

“It’d be great if I can get them the points they need but either way, I’ll be my doing best whether he’s in the challenge or not.”

The third of three with a chance of winning the DBS x Manulife Million Challenge is Flying Quest (128lb) who will line up against a field of 11 in the Class 3 Sing Woo Handicap (1650m) with Frenchman Tony Piccone booked to ride.

“He’s a Happy Valley specialist, his record over the 1650 (metres) there is very good, he just keeps turning up every time – he’s matured and got better at handling the pressure of Hong Kong racing very well,” trainer David Hall said.

Hall’s galloper has won twice at the Valley this term and has seen his rating climb to a career-high mark of 80.

“Once you’ve had a couple of runs there and you’re amongst the placings the Million Challenge starts to take you attention, that you might be able to target some extra prize money, but it’s definitely been in the back of the owners’ minds all the way through,” Hall said.

“We backed him (Flying Quest) up there the other day hoping he might get a win as I expected this race would be a bit stronger but he still got some points last time which was good but obviously all the competitors are running tomorrow night, so how it plays out will be interesting. But if he can get amongst the placings again and rack up a few points then he might be able to hold his spot in the top three.”

The DBS x Manulife Million Challenge presentation ceremony will be held later this season at a date to be announced. 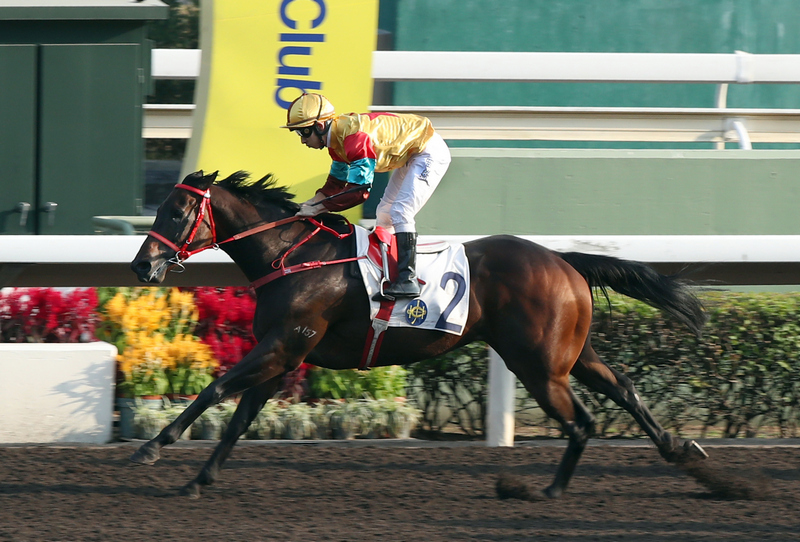