Meryl thrown in at the deep end

While James Peters says a win by Meryl in Saturday’s Group 1 Singapore Guineas (1600m) would be a pipedream, he would, on the other hand, be happy with a small slice of the $400,000 purse and a bit of ‘black type’.

The English trainer doesn’t need to cast a glance at the ratings to figure the Rock ‘N’ Pop mare has her work cut out.

Just the daunting presence of Inferno in the third Leg of the Singapore Three-Year-Old Challenge after he slayed his rivals in the second Leg, the Group 2 Singapore Classic (1400m) three weeks ago, was enough to know where they stand. 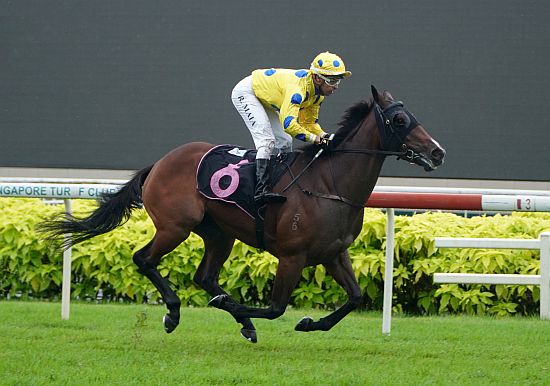 Meryl (Ruan Maia) seen here at her last win in a Class 4 race over the mile on August 23, picture Singapore Turf Club

With a chasm of 24 points between them (Inferno has the highest ratings on 87 while Meryl is on 63 points), the set-weights conditions for such same-age features lengthens Meryl’s odds up even further. The paltry 1.5 kilo mare allowance is hardly a shot in the arm.

Still, a race is to be won, not a scenic tour around the track, and Peters was happy with the prep given to the Oscar Racing Stable’s only Guineas representative following the surprising withdrawal of their top gun Mr Malek (Lee Freedman’s) on Tuesday.

“It’s realistically very, very tough for Meryl, especially with Inferno in the race, but the Guineas is run only once,” said Peters who has booked jockey Wong Chin Chuen for the ride.

“We’ll take our chance, you never know. She’s won well over the mile, and hopefully, she can run into the money.

“She’s well. Forget her last run over 1800m when she had to work hard to lead and couldn’t finish it off.

“She overraced as well and didn’t get cover. The trip is not an issue as long as she can get cover.

“I’d be happy if she can finish in the top three and it can earn her some ‘black type’, which would be good for her breeding side.”

While Peters is not holding his breath for Meryl, his heart will be racing a lot faster when one of his more exciting finds from last season, Grand Koonta, makes his racing comeback in the $100,000 Class 1 race over 1200m. 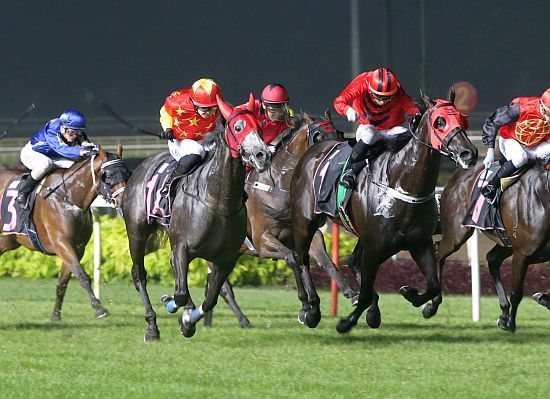 China Horse Club’s four-time winner has not been seen since his close second to the late Bold Thruster in the Group 3 Fortune Bowl (1400m) last January.

It’s not hard to miss the fetching grey five-year-old son of Dark Angel when he trials, even when he is not out to break any records. At the last one last Tuesday, race-rider A’Isisuhairi Kasim had his reins bridged the entire trip, and the hooded galloper still sauntered to the line in fifth around two lengths off the winner Sacred Don.

The wait has, however, been long. Saturday’s run will tell Peters if he needs to tweak around anything else ahead of his Group 1 Lion City Cup (1200m) objective on October 25.

“We were very frustrated with the long period away. It’s very hard as there are limited opportunities with him if he’s to go towards the Lion City Cup,” said Peters.

“They cancelled a Class 1 race over 1200m last time, and I didn’t want to run him on Polytrack. I’m quite happy with the way he’s going, and hopefully he can run well.”

Grand Koonta will actually be coupled up with China Horse Club’s old stalwart, Sky Walk, in that Class 1 event on Saturday.

But again, Peters’ highest-rated galloper (105 points) remains a weight-for-age horse with whom Peters is struggling to find the right race.

“I wish I could have run him on his preferred turf surface, but there were no Class 1 races on Polytrack for him till the end of the year,” he said.

“There was no other choice but to run him on grass, instead of him staying in his box.

“But he’s well and I’m happy with his condition. He actually won on turf (twice, both over 1200m) earlier in his career.”

Champion jockey Vlad Duric, who rode the Battle Paint seven-year-old to two of his nine wins, returns from a two-day careless riding suspension to partner him this Saturday.