Merveilleux is marvelous in the Wonder Where Stakes

Jockey Rafael Hernandez worked out the winning trip aboard the Kevin Attard trainee, who was rated mid-pack along the rail early in the 1-1/4-mile turf test for three-year-old fillies foaled in Canada.

Leaving from the inside post on the turn of the E.P. Taylor Turf Course, She’s a Dream assumed command with Justleaveitalone just to her outside before crossing in front as the field moved down the backstretch.

Justleaveitalone clocked an opening quarter in :24.99, half-mile in :50.89 and three-quarters in 1:16.60 with She’s a Dream pressing the pace in second and Merveilleux, racing without blinkers here, behind the leaders and poised to make a move on the final turn.

Hernandez tipped Merveilleux outside coming into the stretch approaching the one-mile mark in 1:41:16, and the Paynter-Breech Inlet filly took off to score by three lengths. The winning time was 2:05.34 over a firm course.

Closing from the backfield, Gun Society finished second and the Josie Carroll-trained Curlin’s Voyage, who was the 2-1 favourite after winning the Woodbine Oaks and finishing fifth in the Queen’s Plate, was third. She’s a Dream edged out Justleaveitalone for fourth by a half-length.

“We’ve been having a rough meet with this one,” noted Hernandez. “I was impressed with the performance and we had a clean trip today.”

Hernandez said his filly was relaxed in the first turn and all the way down the backside. 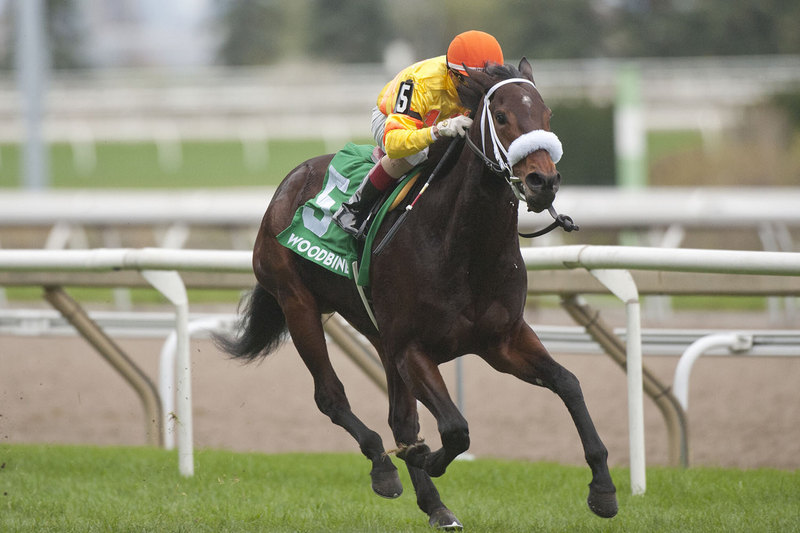 Sent postward as the 5-1 third choice on the toteboard, Merveilleux paid $13.80 to win.

Bred in Ontario by Mike Carroll, Merveilleux showed her potential as a youngster finishing a close second in both the Princess Elizabeth Stakes and Ontario Lassie to complete her two-year-old campaign in 2019.

She won her June 21 sophomore debut before contesting a trio of stakes events, including the Woodbine Oaks Presented by Budweiser, where she finished a game third despite traffic trouble, and ending up sixth in the Queen’s Plate.

“She’s been hard luck,” said Attard. “We’ve always liked her a lot. We thought heading into the Oaks we had the right kind of horse and even heading into the Plate with her we were really excited. Unfortunately, things haven’t gone her way. It’s been a tough season for the Ulwellings to boot, so it’s just kind of the way the cards stack up and everything lined up our way today and she just had a good trip and ran to our expectations.”

Despite Merveilleux being pulled up in her only other grass race, when making her first career start in July 2019, Attard wasn’t concerned about the surface change attributing the initial result to hot weather and noting the filly skimmed over the turf last weekend in her latest work.

Merveilleux now sports a career record reading 3-3-1 from 10 starts with earnings climbing over $550,000.

Theregoesjojo, trained by Mike De Paulo and owned by Samotowka Stables, earned this year’s Turf Endurance title and $25,000 in bonuses for his connections after putting forth a pair of commanding performances in the Woodbine series.

Theregoesjojo earned 27 points to top the standings through the first three legs of the series. The five-year-old English Channel gelding, who was second to Artistico in the 1-3/8-mile opening leg at the beginning of August, won the 1-1/2-mile second round on August 29 and the 1-5/8-mile marathon on October 8 by a combined 6-1/2 lengths in rein to Kazushi Kimura.

A total of $40,000 in bonuses were awarded to the top three finishers, with the winning connections receiving $25,000.

Artistico, trained by Sylvain Pion for 4U Thoroughbred Racing Stable, was second in the point standings with 16 and Peace of Ekati accumulated 12 points to place third for trainer Ashlee Brnjas and Colebrook Farms.