Mega Heart delivered an important 16th win of the campaign for trainer Michael Chang at Sha Tin on Wednesday evening.

“See you next season!” the popular handler quipped after reaching the number required to avoid a first ‘strike’ in the Jockey Club’s three and you’re out system.

Chang hit the magic number with eight fixtures in hand. The only Hong Kong trainer to saddle a winner in the United States – a G1 at that, thanks to Rich Tapestry’s Santa Anita Sprint Championship – has had a lean time in recent seasons but you wouldn't know it from his mellow demeanour. 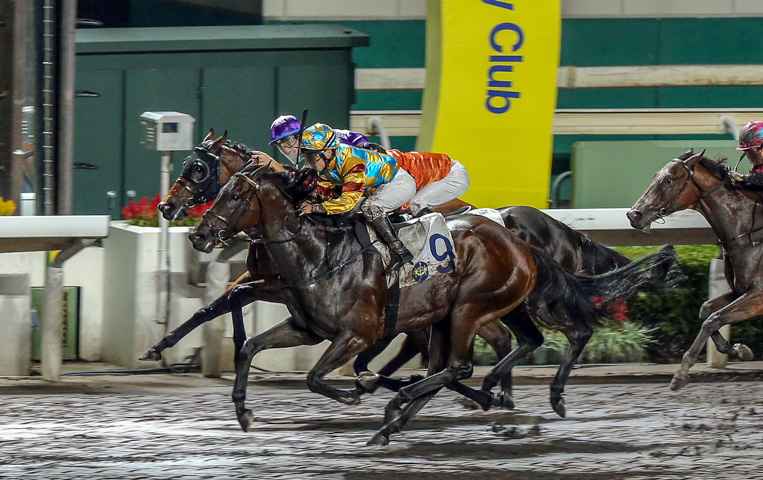 “I’ve always done the job properly and I get the best out of what I have. I would like to have more winners but the horses just don’t have the ability – I try my best.”

Mega Heart’s (117lb) success was achieved at odds of 21/1 but that price did not reflect Chang’s level of confidence.

“I expected him to run a good race,” he said. “At the start of the season he carried big weights and was only beaten two or three lengths and now he’s dropped down the handicap. I thought the dirt track would suit him, and, off a fast pace, he was always going to be coming at them in the finish.”

Jockey Keith Yeung drove the six-year-old through a deep-closing stretch run to grab the spoils in the final strides from runner-up Simply Big (119lb).

The four-year-old was all out with 200m to race but held on to hold Raging Blitzkrieg (126lb) by three quarters of a length, taking his career tally to six from 11.

“Last time things didn't go his way but Me had him spot on for today and last week he trialled really good with me, so the horse was in form,” Teetan said

“When he got there I was expecting him to quicken up but after working so much I thought he was not going to kick. Once he got there and I asked him, he kicked pretty good for a strong win.”

Umberto Rispoli missed Saturday’s Sha Tin card with a back injury. That was his first absence this term and he made up for it with his first success since 5 May in race two, section one of the Class 4 Tong Fuk Handicap (1650m), on Lasting Friendship (122lb).

The Peter Ho-trained galloper had not hit the mark in 11 Hong Kong starts, not since a 1200m maiden win at Pukekura pre-import. The gelding held race favourite Touch Of Luck (123lb), who ran on for second under Zac Purton despite the inconvenience of his unloosening pacifiers bouncing around his head before flying off completely in the home straight.

“He’s a horse that I’ve been following for a long time and I was thinking he’d been unlucky a few times from a wide draw,” Rispoli said of the 29/1 shot. “The instruction had been to get cover in midfield but he jumped so good tonight, and Starlit Knight surprised me by not wanting to lead, so I took the decision to sit outside the leader. The pace was slow and my horse is one-paced, he won from the front in New Zealand so I wasn’t scared to be there. We got down to the 600 (metres) and I tried to wind him up a bit, to get him working and he kept on to the line.

“That gives me some oxygen to the end of the season!”

You have to go back two months and 17 meetings to find the last time Purton left the racecourse without a win and while the champion jockey was not in the kind of all-conquering form that has bagged six and four-timers for fun, he still walked home with a win to maintain his streak.

Joao Moreira moved to 81 wins for the campaign with a double tonight and is now clear second in the premiership, three ahead of Teetan.

The three-time champion opened proceedings with a smart success in section two of the Tong Fuk Handicap (1650m) on the John Size-trained Remarkable. The gelding nailed his third course and distance win, having dropped to a mark of 52 from 66 at the season’s start.

Moreira made it two when teaming up with the in-form David Hall in race four, section two of the Class 4 Silverstrand Handicap (1200m). The four-year-old stretched away to a two and a quarter-length win, breaking his maiden at start 10.

Trainer Frankie Lor turned to stable apprentice Alfred Chan to guide top-rated Starluck (123lb) to success in section one of the Class 4 Silverstrand Handicap (1200m). The rider rewarded his boss with a tidy three-quarter-length victory, box-seating the lead before switching out in the straight and quickening between runner-up Grand Harbour (122lb) and third-placed Sky Treasure (129lb).

That was the 10lb claimer’s seventh win and his first in a month.

Lor’s Kings Shield, fifth in the G1 St James’s Palace Stakes at Royal Ascot this time last year, finally found his Hong Kong feet at the seventh time of asking. The four-year-old led the field in the Class 3 Lido Handicap (1650m) and dashed clear down the straight to win by four and three-quarter lengths under Derek Leung.