The Victoria Derby is no longer a one-horse race after a spectacular all-the-way victory by a son of So You Think called Thought Of That in the Group 3 Caulfield Classic (2000m) on Saturday.

Once ranked a $101 bolter when nominations for the Derby opened, Thought Of That is now the $3 second favourite with BetEasy behind Spring Champion Stakes winner Shadow Hero ($2) after his incredible three-and-three-quarter-length win from the front.

Jockey Linda Meech is now in the box seat to challenge for the $2 million Victoria Derby on a horse that has already set himself apart from most others in her mind.

"Most horses when you go to the front on them and give them a dig, they fire up on you and get pulling but he's the opposite," she explained. "He's pretty cruisy and only goes when you want him to.

"It is completely different to every other horse as when you normally put the blinkers on, they fire up but he switches off and the one thing he does when he has them on, he listens to you and not what he wants to do."

Thought Of That did exactly what Meech wanted him to do on Saturday as she pressed early for the lead and then controlled the speed to the point where she admits she was chuckling to herself on the point of the home turn.

It was at that point that the Ciaron Maher and Dave Eustace-trained colt, who started at $4.20, put four lengths on his rivals as he put the race away before the majority of the field had turned for home. 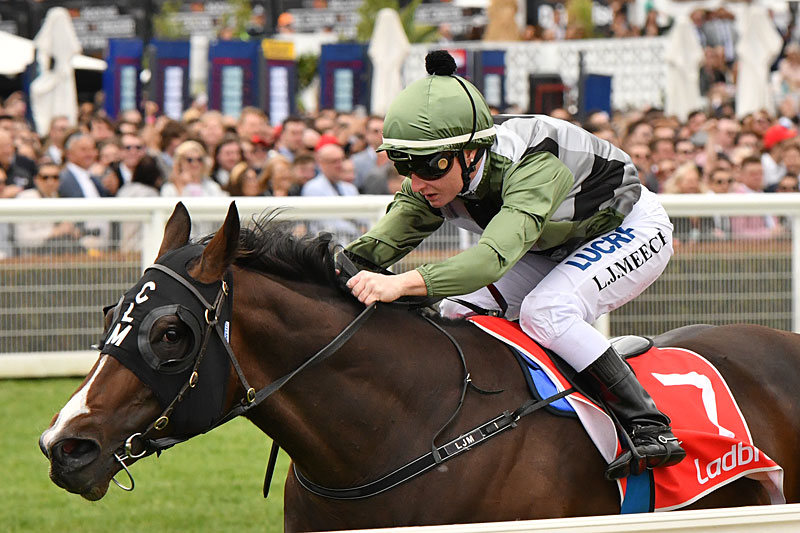 Thought Of That and Linda Meech, picture Quentinjlang.com

Meech said Thought Of That was once a work in progress but has improved out of sight in recent weeks.

"It was pretty easy. He just idled in front. He just went the speed I needed to go to hold the front and he never got flustered.

"He never touched the bridle and he gave a great kick from the 600. I gave him a little squeeze and off he went and never looked like getting beat.

"He was pretty good at Donald (with an eight-length maiden win) but I just wasn't sure of the calibre of the horse he raced against there and I wasn't quite sure he could do it twice in a row.

"From his work to his races, he's been pretty disappointing until the blinkers went on and they have made him so tradesman-like.

"He used to have a few chinks in his armor and even last start he was still carrying on but today he never gave a murmur in the gates.