Kranji racegoers would have been pleased to see former champion juvenile Lim’s Lightning back at his old stomping ground when he came out for a quiet barrier trial on Thursday.

Most thought they would not see the 2018 Group 2 Aushorse Golden Horseshoe (1200m) winner again after he left Singapore halfway through the 2019 season to pursue a new racing career in Australia.

His last Kranji start came in the Group 1 Singapore Guineas (1600m) in May 2019 when he just lost second place (to the winner Top Knight) by a nose to Elite Incredible. 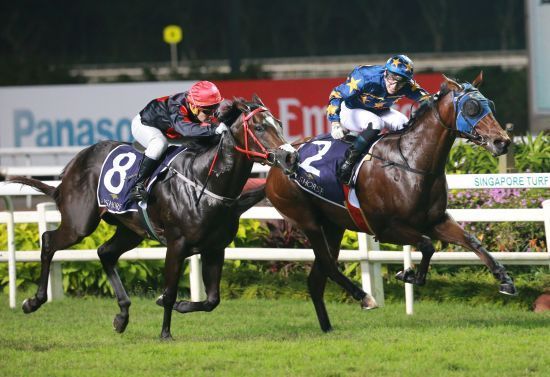 But things didn’t quite pan out the way the Lim’s Stable would have wished in either Queensland or Victoria (eight runs split both ways).

Even after he managed to get a win at his third-last start in a BM78 race at Werribee under former Singapore champion jockey Noel Callow (May 7, 2020), a decision was made to send him back to Singapore at the end of last year in a bid to reignite his potential.

Now five, the son of Lope De Vega is back to square one, though he has not quite come full circle as he is now trained by Daniel Meagher when all his 10 Kranji starts for four wins and three thirds came under the banner of the other Lim’s Stable conditioner, Steven Burridge.

However, Lim’s Lightning (after the first half of his Australian stay with Murwillumbah trainer Matthew Dunn) was prepared at his Victorian stint by Meagher’s elder brother Chris in partnership with their father and ex-Kranji mentor John at their Mornington base.

Now it’s the youngest Meagher’s turn to take over, but as is the family’s style, Meagher said there wouldn’t be any cut corners with his new ward, who to him, was still a long way off a comeback race.

“He didn’t perform to the level we thought he would in Australia,” he said.

“He had four unplaced starts for Matthew Dunn, and we thought the Melbourne way of racing (anticlockwise), which is like up here (Kranji), would suit him better. He won one race with Callow but he then looked like he had had enough.

“Mr Lim (Siah Mong) is a massive supporter of Singapore racing, and together with (racing manager) Mick (Dittman), they decided to send him back here to a place where he was very successful before, and hopefully that’ll get him right again.

“At the moment, there is absolutely no rush to get him back racing. Like our usual style, we will be very patient with him.

“He’s travelled a fair bit – out of Singapore to Australia now back to Singapore – so he’s settled in well, even if it took a while to get him back into Singapore.

“He’s still not where we want him to be. His coat needs to change, he needs to body up a little.

“It’s been a while since he raced here, so we just gave him a soft trial this morning.”

Sporting a white hood and keeping a low head carriage, Lim’s Lightning travelled rather restrained at the back for Meagher’s B apprentice jockey Fahmi Rosman to finish a distant fourth to Desmond Koh’s newcomer Who Loves Bae (Noh Senari).

“Fahmi rides him every day and has done a good job with him. He will be our apprentice one day,” said Meagher.

“I put earmuffs on this morning as I just wanted him to have a good experience around the track, have a look around. I just told Fahmi to take his time and not put any pressure on the horse.

“At this stage, we’re just taking baby steps with him. Hopefully, he can one day return to the form that made him champion two-year-old here.”