A five-horse jump-out at Ballarat late last week may result in three runners for trainers Ciaron Maher and David Eustace in a Group 1 race at Flemington. Explosive Jack, Persan and Sir Dragonet (Ire) are all entered for the Turnbull Stakes (2000m) on Saturday.

Eustace says “Jack” and “the Dragon” will run, while Persan put his hand up following the jump-out.

“We weren’t sure if Persan was forward enough to run in that race and run again before potentially running in the Caulfield Cup,” Eustace said. “We were thinking of going straight into the Caulfield Cup, but he might now run in the Turnbull.”

Persan won the jump-out under a good hold, while Explosive Jack and Sir Dragonet were pushed along to make them work. Eustace said the jump-out, on the course-proper, was the trio’s major piece of work ahead of Saturday’s Group 1 race.

Persan struck a purple patch of form last year, winning the Bart Cummings, run at Saturday’s meeting, before going on to finish fifth in the Melbourne Cup. He returned in the autumn to win first-up at The Valley, then finished second in the Easter Cup at Caulfield before finishing out of the placings in two Flemington staying assignments.

Persan was gelded before returning with a third behind stablemate Floating Artist at Flemington on September 11.

“It was a really good return with topweight, and the gelding [procedure] looks like it has settled him down a touch,” Eustace said. “He took a bit of managing as a colt. Some of them take the gelding well and he seems to have handled it very well, so we feel he can improve again.” 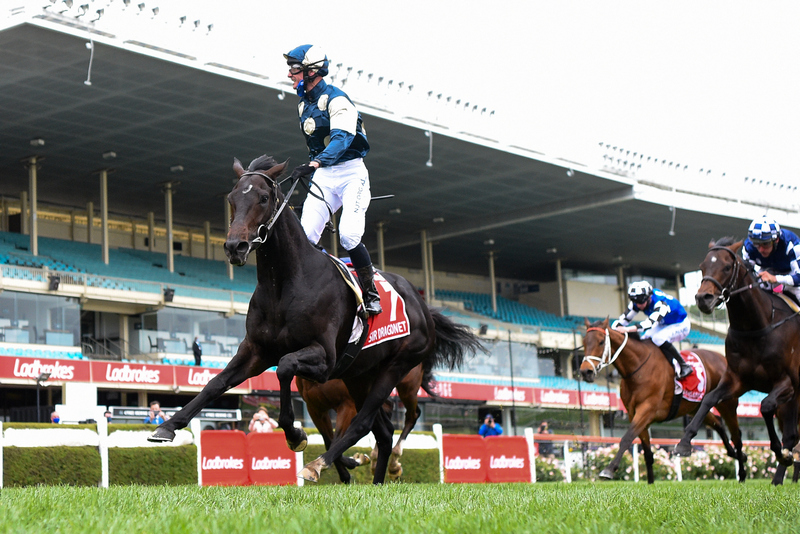 Both Sir Dragonet (Ire) and Explosive Jack had a gallop at The Valley early last week before the jump-out later in the week.

“Sir Dragonet, he handles a lot of work and needs a lot of work,” Eustace said. “We’re happy with where they are at, and they can have a quiet week leading into the race.”

While Maher and Eustace could have three runners in the Turnbull, rival trainer Chris Waller has five of the 20 horses nominated for the race. Verry Elleegant (NZ) is among the entries, as is Hungry Heart, Atishu (NZ), Sheraz and Surefire.

The Peter Moody-trained Incentivise is also scheduled to have his second start in Melbourne on Saturday in the Group 1 feature.