Setbacks have impeded Lucky Patch’s ascent this season but trainer Francis Lui believes the speedster can take a step towards reaffirming himself as one of Hong Kong’s premier sprinters in Sunday’s HK$3.7 million G3 Sha Tin Vase Handicap (1200m).

“He seems to be getting better. His last run was his first run back from the break and after that he seems to have improved. I’m not saying that he’s back to his best form but he is getting better,” Lui said. 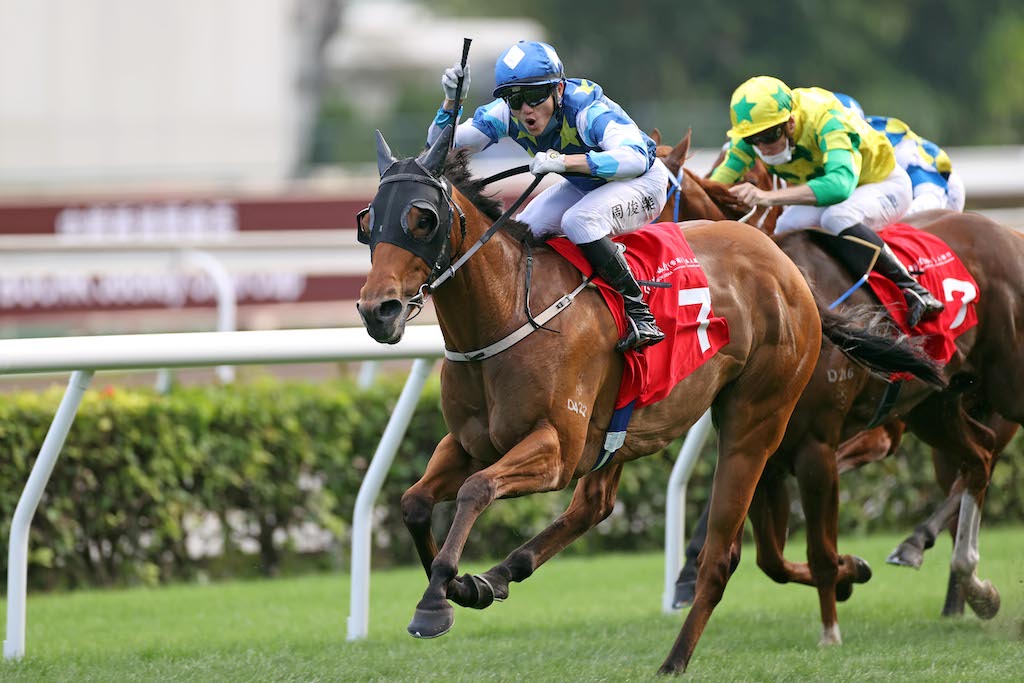 Consecutive Group 2 wins had the bay pinned to rule Hong Kong’s sprint division before a mishap in the 2021 G1 LONGINES Hong Kong Sprint (1200m) sidelined the five-year-old for over four months, while a delayed return to Sha Tin from Conghua meant he went into the G1 Chairman’s Sprint Prize (1200m) on FWD Champions Day without a lead-up run.

The El Roca gelding finished a fading ninth in April’s Chairman’s Sprint Prize but has since trialled in a bid to recapture his blistering best which returned victories in the 2021 G2 Premier Bowl Handicap (1200m) and 2021 G2 BOCHK Private Banking Jockey Club Sprint (1200m) earlier this term.

Jerry Chau takes the reins again and will be looking for a third win aboard the HK$13.90 million earner from gate one at Sha Tin this weekend.

“This will be his last run this season. Hopefully he can run a good race and we’ll plan for next season after this one,” Lui said.

Against Lucky Patch (130lb) is Hot King Prawn (126lb), Super Wealthy (126lb), Sight Success (125lb), Cordyceps Six (113lb) and Nervous Witness (113lb) in an 11-runner contest that includes a pair of Group 1 winners with Sky Field (133lb) lining up for trainer Caspar Fownes, who indicates an overseas trip to Japan or Australia is on the table for his chestnut.

“We might seriously look at Japan. I’ve always wanted to go back to Japan. I have some unfinished business there and I’ve gone close a few times. We could even look at going for something like The Everest; these are all options that I’ll certainly be looking at,” Fownes said.

Fownes campaigned the great Lucky Nine to Japan four times for a narrow second in the G2 Centaur Stakes (1200m) at Hanshin as well as two fifth placings in the G1 Sprinters Stakes (1200m) at Nakayama — the exact race that Sky Field could be headed for come October.

“I probably want to travel. I’ll be looking to travel with him next season because he’s that type of horse. He’s starting to understand what his job is now and I think a trip away from Hong Kong will do him a world of good,” Fownes said.

Sky Field has been nothing short of consistent across his career with six wins and nine placings from 21 starts including victory in December’s LONGINES Hong Kong Sprint.

“He’s really well, he’s in great nick. Obviously, we’re back to handicap conditions this time, so he’s carrying 133 pounds. But he’s a big, strong horse and I think his form is really good and we just tweaked his equipment for this race. He’s got a hood on him for the first time and his work has been really nice in the mornings,” Fownes said.

The Deep Field gelding is yet to wear any form of headgear on race day, only sporting a tongue-tie as part of his racing tack as he gears up for Sunday’s Sha Tin Vase with Blake Shinn booked to ride.

“Like anything with these races, you always respect horses that are at the lower end of the scale. Like Cordyceps Six and then Nervous Witness off the light weights, that is, at a first glance,” Fownes said.

“He’s so consistent and he cost himself second place last start by running in, which was a shame because that was a big cheque on offer for two million. Anyway, we’re here and back onto the A Course which will be lovely.

“He looks beautiful and he’s ready for another run, so we’ll see how we go and hopefully he gives us a big effort.

“We’ll play it by ear, this race will tell us whether he has had enough for this season. He’s certainly done his job for us and we’re proud of him. I think he’ll come back a bigger and better horse again,” Fownes said.

Fownes is represented by three in the G1 Standard Chartered Champions & Chater Cup (2400m) on Sunday with Senor Toba, Columbus County and Zebrowski taking their place.

Senor Toba arrived in Hong Kong from Chris Waller’s stable in Australia where he was a two-time winner at Moonee Valley and Randwick, while he also finished second in the 2021 G1 Queensland Derby (2400m) at Eagle Farm.

Joao Moreira partners Senor Toba, while Matthew Chadwick hops aboard Columbus County with Vincent Ho getting the leg-up on Zebrowski.