Frankie Lor has taken another significant step towards securing the Hong Kong trainers’ championship with a Happy Valley double on Wednesday night, while also bearing down on the Hong Kong record for the number of wins in a season by a trainer. 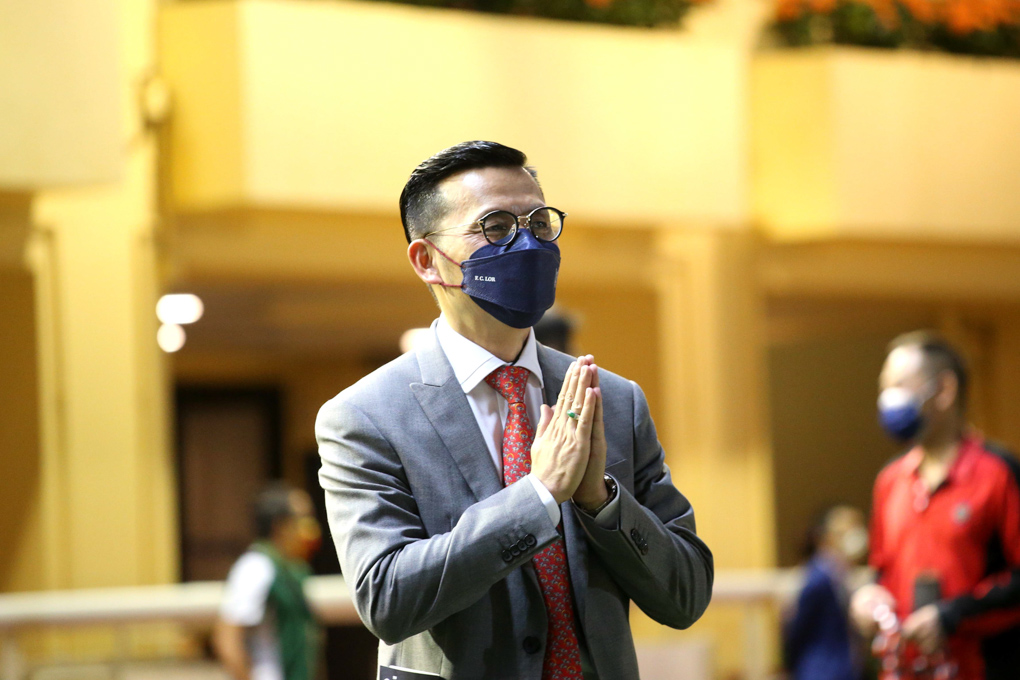 In the throes of just his fifth season as a trainer after working for Size and John Moore as an assistant trainer, Lor’s previous best seasonal haul is 65 – a figure he has reached three times since being granted a full licence in 2017/18.

Despite the mid-week double and an imposing buffer over Size, self-effacing Lor continues to dismiss suggestions the championship race is all but over.

“At this moment, I need to try to win more because the old boss (Size) is really strong, one of the really top trainers, I must keep on trying to win,” Lor said. “I just want to keep on winning more races for my owners.”

Lor’s warning over Size’s capacity was duly borne out with Ping Hai Galaxy’s dazzling display to win the Class 3 Drake Handicap (1200m) for Alexis Badel, who notched his 50th victory of the season and sealed a double in the process.

“This horse (Hyperion Tree) won well. He appreciated the light weight and maybe we can ride him this way again. I will probably run him again over 1800m on the last day of the season at Sha Tin (on Saturday, 16 July),” Lor said.

The Redwood gelding was followed into the winners’ circle by stablemate Go For Tea, who was posted a comfortable victory under Zac Purton in the first section of the Class 5 Tim Mei Handicap (1650m).

“I’m very happy with Go For Tea because he had barrier 12 but Zac was able to get him to the front and he was able to have a good run without any pressure which is good because he’s one-paced.”

The win was Purton’s 130th of the campaign and was the first leg of a double for the Australian, who subsequently partnered Manfred Man’s Compassion Super to victory in the first section of the Class 4 Harcourt Handicap (1200m).

“The horse is improving and the jockey did a good job,” Man said. “The horse will now have a two-month holiday before next season.”

The brace left Purton with a two-win lead – 131-129 - over arch-rival Moreira, who started the night in perfect fashion with a copybook ride aboard Tailor Made to win the second section of the Class 5 Tim Mei Handicap (1650m).

Jumping from barrier two, Moreira settled the Archipenko gelding midfield before fanning into clear running in the straight to prevail by a length over This Is Charisma.

Matthew Chadwick enhanced hopes of securing the Tony Cruz Award for the most successful local jockey when Chris So’s Classic Unicorn set a cracking pace before hanging onto to snare the Class 2 Albert Handicap (1000m) in a cliffhanger finish from Rock Ya Heart and Handsome Bo Bo.

The success left Chadwick with 53 wins for the season, five ahead of triple Tony Cruz Award recipient Vincent Ho (48), who teamed with Me Tsui’s Wind Speeder to land the second section of the Class 4 Harcourt Handicap (1200m).

Harry Bentley notched his 25th victory of the campaign, lifting a refreshed Momentum Galaxy to victory in the Class 4 Garden Road Handicap (1000m) for Jimmy Ting.

Ting, who celebrated his 30th success of the term, said Momentum Galaxy had benefited from a short spell and would now be sent for a longer break.

“He races best fresh and in the middle of the season, I probably raced him too much,” Ting said. “We gave him a break and brought him back and he was back to his best form. I was worried about the forecast of rain but thankfully it stayed dry and Harry rode him very well.”

Douglas Whyte and Lyle Hewitson combined successfully for the 18th time this season when Big Two broke through in the Class 4 Lung Wui Handicap (1650m).

“He’s been a victim of circumstances and he’s had a few unlucky runs. He’s been an honest horse and, with time, he’s matured and Lyle gave him a beautiful ride tonight,” Whyte said on posting his 43rd win of the season.

“He won convincingly. I’ve always expected him to improve but the horse in himself has come to hand late and there’s still some improvement in him.”