Hastings trainer John Bary has saddled plenty of big-race winners on home soil, but none with the shock factor of Callsign Mav’s $82 boilover in Saturday’s Gr.1 Tarzino Trophy (1400m).

Jockey Jonathan Riddell was a key part of that Jimmy Choux story, riding the $3.6 million earner in all but two of his 26 starts, and on Saturday he teamed up with Bary again for another memorable triumph.

“It was just like the old days again, with Riddell and Jimmy,” said Bary, who is recuperating at home after undergoing back surgery earlier in the month.

“Jonathan moved up to Cambridge four or five years ago now and has been doing a lot of riding up there since then, so the stars hadn’t really aligned in recent times in terms of him riding for us. But it came together on Saturday.

“It’s a shame I’m stuck at home and couldn’t be there today, but this has definitely given me a big boost in my recovery.”

Riddell played his part to perfection, urging Callsign Mav forward from his midfield draw and taking up a prominent position in the slipstream of Deerfield and The Mitigator.

Riddell drove Callsign Mav through between that pair at the top of the straight, and the rank outsider dashed to the lead with 300 metres to run.

Favourite Avantage gave chase down the outside, with Supera flashing home in the closing stages closer to the rail, but Callsign Mav held them all out by three-quarters of a length.

“I couldn’t believe how well the horse was going when the split opened,” Riddell said. “He was strong to the line, he just kept going. Full credit to John and all of his team.”

Callsign Mav came into Saturday’s race well under the radar, with a Foxton trial in early September his only public appearance since finishing fifth in the Gr.2 Wellington Guineas (1400m) in March.

But the four-year-old boasts a proud record on his home turf, winning three of his five previous starts there and finishing second to Catalyst in last year’s Hawke’s Bay Guineas. On Saturday he went to a new level and upstaged a stellar cast of weight-for-age performers.

“I had a bit of confidence that he’d run well today,” Bary said. “His jumpouts had been good and his trial was great. We’d just been behind the scenes, attracting no attention with the likes of Avantage and others in the field. It’s been nice just to row our own canoe, and a big thank you to the staff. This is all down to them, they’ve done a hell of a good job. They put in all those long, hard days, so I’m thrilled for them.

“It was a 10-out-of-10 ride from Jonathan. He slid forward from a nice gate, got in the trail beautifully and put the horse to sleep. Then he produced him at the right time and he kicked away really well. In those last 50 metres, I was right there on the horse’s back with him.
“It’s a great result. It’s one thing to race well against your own age group at three, but you always wonder whether you’ll be able to come out and do it again at four against those bigger, hardened criminals. He’s done it today.”

The first Group One winner for Mapperley Stud’s ill-fated stallion Atlante, Callsign Mav has now won four races and $188,000 in stakes for an ownership group that includes Bary and six others.

“Outside of me, all of the owners are Australians, and this is their first Group One win,” Bary said. “I’m really happy for them. They’re all trapped in Victoria in lockdown at the moment, otherwise they’d be here, tearing the local town apart.”

Bary was non-committal about shooting for a repeat result over 1600 metres in the Gr.1 Windsor Park Plate on October 3.

“The problem with that is that he’s never seen out a mile before,” he said. “He couldn’t do it in the 2000 Guineas last year, or the Levin Classic at Trentham. But he loves Hawke’s Bay, with six starts there now for four wins and a second to Catalyst. And after he won a 1400-metre race here in February, Craig Grylls said he thought he could have run a mile that day. So we’ll see.”

Supera produced the eye-catching performance among the beaten runners, powering home from near the tail of the field to finish second in her first start since placing in the Gr.1 New Zealand Stakes (2000m) in early March. Avantage was third, with jockey Danielle Johnson suggesting she may have been affected by a prolonged wait in the starting gates.

Jennifer Eccles was close up in fourth, just ahead of brave front-runner Deerfield. Tavi Mac and the late-finishing Vancooga also finished with three lengths of the winner. 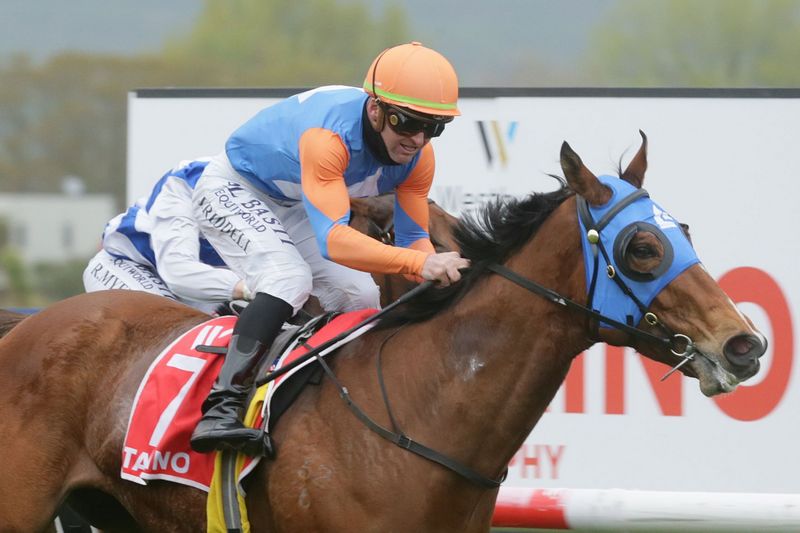 Jonathan Riddell is a picture of concentration as he guides Callsign Mav to a massive upset at Hastings, picture Trish Dunell

Successful just two races earlier with raceday debutant Shezzacatch in the Listed El Roca-Sir Colin Meads Trophy (1200m), the pair were at again with the Jamie Richards-trained three-year-old who doubled their pleasure with a stylish performance.

The Per Incanto filly had provided a glimpse of her ability with an authoritative victory fresh-up at Taupo last month after finishing fifth behind stable Need I Say More in her only start as a two-year-old.

The well fancied third favourite provided Grylls with an armchair ride after settling beautifully in midfield from an outside barrier as race favourite Babylon Berlin and Sweet Anna set up a muddling speed in front.

Grylls asked Miss Aotearoa to improve approaching the home bend and she joined issue with the two pacemakers at the 200m before easing clear to win by half a length from Sweet Anna, Babylon Berlin and the late closing Tokorangi, who ran out of room in the final 50m when finishing powerfully along the rail.

“She feels very good underneath you although we had to do it the hard way from an outside draw,” Grylls said.

“We covered ground all the way but to her credit, she travelled brilliantly and she was very tough.

“They were coming at her late and she was a little bit wayward but she got the job done.

“Going by her breeding she looks like she will get over ground and has a bright future ahead of her.”

Richards was equally as impressed with the victory by the filly who is being aimed at the Gr.1 Barneswood Farm New Zealand 1000 Guineas (1600m) at Riccarton in November, although he isn’t in any rush with her.

“She has a great pedigree page and it is all in front of her,” he said.

“We’ll take her home and assess her but we don’t have to rush into racing her again in a fortnight as she is a filly with a future.

“We might take a look at the Soliloquy Stakes (Gr.3, 1400m) and then down to Riccarton, all going well.

“I would like to thank Tony Rider who has been a good supporter and he now has another lovely, stakes-winning filly for his broodmare band.”

Bred by Rider from his Danasinga mare Danex, Miss Aotearoa is the younger half-sister of Listed The Andrew Ramsden (2800m) winner Oceanex, who is a leading candidate for the Gr.1 Lexus Melbourne Cup (3200m) in November and the Gr.3 Rough Habit Plate (2000m) winner Amexed.

Hastings filly Shezzacatch was thrown in at the deep end for her debut in Saturday’s Listed El Roca-Sir Colin Meads Trophy (1200m), and she spectacularly rose to the occasion.

After a placing in a Foxton trial earlier this month, trainers Guy Lowry and Grant Cullen considered a couple of options for kicking off her racing career. They could point her towards a midweek maiden at Woodville on September 24, or they could stay at home and tackle a classy line-up of youngsters in Saturday’s feature. Having seen a glimpse of something special in the Savabeel filly at home, they opted for the latter. The gamble paid off.

With some big reputations among the talented three-year-olds who converged on Hastings for the opening day of the Hawke’s Bay spring carnival, Shezzacatch was overlooked at $36.. But she burst out of obscurity with a brilliant performance.

“That was a nice finish,” Lowry said. “We’re not surprised by that performance, although she still doesn’t know much really, and she’s been a real handful. The trial the other day was the best she’s ever behaved, and she’s continued to improve since then. She’ll learn a lot more from this as well.

“We were looking at a maiden race at Woodville next Thursday, but we were worried about the possibility of not getting a start there. So we decided to come here today. On a good track, with a good jockey, it’s all worked out.”

Ridden by Craig Grylls, Shezzacatch settled in a midfield position for most of the race. With 200 metres to run, she was still fifth and more than three lengths behind as Suffused and Alchemia appeared to be fighting out a two-horse finish.

But then Shezzacatch unleashed a dazzling turn of foot, charging to the front and winning by three-quarters of a length.

“She was first-up and had only had the one trial, but Guy did tell me that she could gallop,” Grylls said.

“We got shuffled back a little bit turning for home, but then I really felt her come up underneath me. Gee, she had a good turn of foot late. She’s got a very bright future.”

Shezzacatch was bred by Tony Rider, who shares ownership with Guy and Bridgid Lowry, Paul and Maree Apatu, Grant and Ali Syminton, Sam and Anna Wood and John and Diane Bongard.

Shezzacatch is out of the O’Reilly mare Elusive Nature, who is a half-sister to the Lowry and Cullen-trained Gr.1 New Zealand Oaks (2400m) placegetter Savvy Dreams. Like her, Lowry believes Shezzacatch will be suited to longer distances in the weeks and months ahead. However, she is not currently nominated for the Gr.1 New Zealand 1000 Guineas (1600m) at Riccarton in November.

“She’ll definitely go a lot further than 1200 metres,” Lowry said. “I think she’ll be good over a mile in time.

“The plan was always to put her out for ten days afterwards and that is what we will do.

“Longer term a race like the Gr.1 Levin Classic (1600m) could be an option or we could just send her to Australia and leave her there.”

The El Roca-Sir Colin Meads Trophy was elevated to black-type status in 2017 and has been a springboard to bigger and bigger things for the likes of previous winners Bostonian (2017) and Catalyst (2019). Loire, who finished third last year, went on to win the New Zealand 1000 Guineas.