Lim confident Hera can hold his own

Trainer Jason Lim is banking on Songgong Hera’s natural gate speed to beat his wide barrier, and ultimately the stronger opposition he takes on this Sunday at Kranji.

After opening his local account at his fourth bid when leading a Class 4 field a merry dance over 1000m on April 10, the Spirit Of Boom four-year-old is being taken to the next level in the $70,000 Class 3 race over 1100m.

Barrier two was a big help at that maiden Kranji win. Songgong Hera landed in front without flexing a muscle and was thereafter never in doubt of getting pegged back, but it may be a totally different scenario from barrier No 12 (to drop to 10 after scratchings). 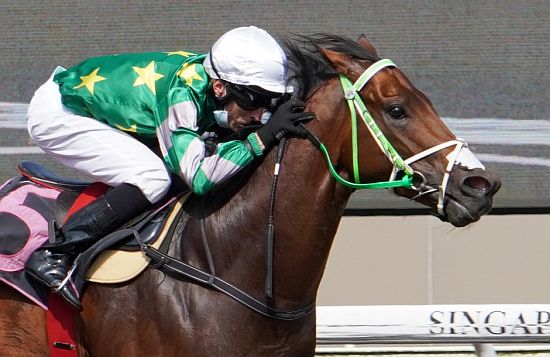 Lim later said that the plan was not to lead at his win, but when the former Peter and Paul Snowden-trained horse known as Warfare in Australia and who won two 1200m races in country New South Wales by coming from behind, flew the lids to take up the running, Beasley decided to not fight him.

It proved to be the correct decision, which Lim is keen to revisit this Sunday, sticky draw notwithstanding.

“I think he’s very fast and can match Sun Ops for pace, even from the wide barrier,” said Lim, referring to Desmond Koh’s unbeaten speedster, who has drawn slightly better in eight.

“Sun Ops is the horse to beat, but I expect a good run from my horse. I really think he stands a good chance, I’m confident it’ll be a good fight between Sun Ops and my horse.

“Regardless, this race will tell us where he stands, whether he measures up, but from what he’s shown us after that win, he’s improved further, he’s even better than at his last start.

“I think the gelding operation has really improved him. He went really well at his first run after he was gelded.”

Last-start winning jockey Danny Beasley is back in the saddle, which is not a surprise given how enthusiastic he was at the post-race debrief.

Lim was, however, trying not to get too far ahead of himself.

The Australian-trained handler is also running Chicago Star in the same contest. Even though the Exceed And Excel four-year-old has been a little out of his depth in Class 3 company since the last of his two wins in a Class 4 race over 1200m on November 21, Lim has not written him off yet.

“Chicago Star was running good races, but we’ll see how he runs in Class 3 or else, he can go back to Class 4,” he said.

“It’ll be his first time on Polytrack. Hopefully, he runs a good race, too.”