Without a ride in the Kranji Mile following Hideyuki Takaoka’s decision not to run Makanani, Lerner didn’t hesitate a second when Baertschiger came a-calling. From watching the glamour race from the jockeys’ room, he was suddenly getting a leg-up on the 2019 Singapore Horse of the Year.

Duric was rubbed out for one day for careless riding aboard winning ride Field Marshal in the backstraight of last race on Sunday. He decided to defer the suspension to Kranji Mile day on August 16 instead of serving it this Saturday when he had already been booked for rides. 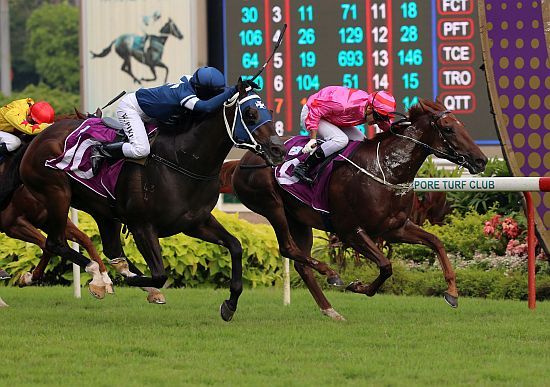 It has now led to a rare pairing for Baertschiger and Lerner, but circumstances can sometimes give rise to such impromptu deals, primarily suspensions or injuries/sickness (regular stable jockey John Powell just underwent surgery and is now recovering), and now a less common circumstance, but rapidly coined as the “new normal” – shortage of jockeys caused by a virus.

“When Vlad was suspended, I went through the list and only Marc was available. I called him right away,” said Baertschiger.

“Marc has ridden once for us, it was on Blue Swede (in a Class 2 race over 1400m last October, unplaced). I’m Incredible has pulled up well after his last race, all is well with him.”

Ridden by Duric at his last start in the Class 2 race over 1400m on Sunday, I’m Incredible was caught three wide throughout, and under the 57.5kgs impost, looked one-paced in the home straight to run 11th to stablemate Passport To Rome. It was his second consecutive defeat (he ran last first-up but it was a Polytrack race over 1200m, which didn’t suit) since his torrid run (ninth to Mr Clint) from a wide gate in the Group 1 Dester Singapore Gold Cup (2000m) in November.

Lerner rode Makanani – who was resuming since her unplaced run in the same Singapore Gold Cup – in that Sunday race, widely regarded as a Kranji Mile prelude, finishing one spot ahead of I’m Incredible.

“I’m very happy to ride I’m Incredible in the Kranji Mile, and would like to thank Shane and the owners for putting me on,” said the French jockey who has 53 Kranji winners on the board since debuting at the end of 2018.

“He is a classy horse. I think he had excuses at his last couple of starts.

“Makanani ran a good race on Sunday. She ran on nicely over a distance that didn’t suit her, and on a day when backmarkers were not making ground.

“She’s not in the Kranji Mile, but I can’t wait to ride her in the longer-distance races later in the year.”

Lerner’s main supporters have been Takaoka and Jerome Tan in the last two seasons, but the former German-based jockey has been getting rides from a wider spectrum of trainers with the currently thin riding ranks, including a first ride for Cliff Brown on Sunday, In All His Glory who ran fourth to Savvy Command.