Despite forward runs in his barrier trials prior to his last two starts, Katak's form did not turn up on raceday at Kranji, prompting trainer Ricardo Le Grange to resort to the snip.

After opening his account and backing it up with a second win earlier this year, South Africa's 2020 Cape Winter Series Triple Crown winner put in a disappointing run when he finished at the tail in a Class 1 race (1400m) first-up on April 30, leaving connections baffled.

Not all hopes were lost, though.

His South African handler had an inkling as to what could probably work for the five-year-old son of Potala Palace moving forward, but he did not call the vets just yet.

But following another crushing defeat in the Group 1 Kranji Mile three weeks later, when he finished seven-and-a-half lengths behind the winner, Lim’s Lightning, Le Grange decided it was time for the irreversible. 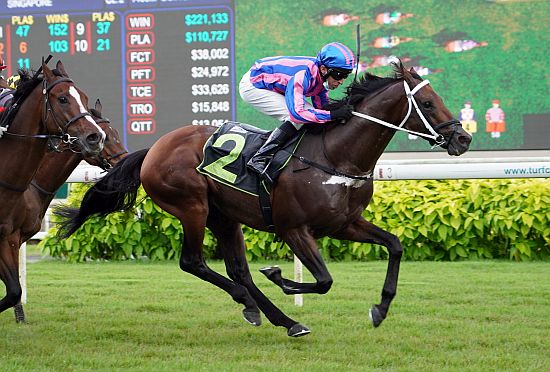 Katak will pair up with jockey Vlad Duric for the first time in the Kranji Stakes A race on Saturday, picture Singapore Turf Club

Whether the cut was the right thing to do, Le Grange will get an answer in the $100,000 Kranji Stakes A race over 2000m this Saturday.

“It had always been at the back of my mind to do so (gelding him), but I didn’t want to do it before the big race (Kranji Mile), so he was gelded a few days after that run,” said Le Grange.

“I felt that he wasn’t putting in 100% in his races and he was starting to show signs of coltishness back at home. His demeanour was changing.

“Time will tell but his mannerism has improved. He’s settled down a lot more and wasn’t as ‘fierce’ in his trackwork. He’s much more manageable now.

“Then again, it was always going to be difficult for him from that barrier (16) in the Kranji Mile.

“Vlad will ride him this time. He came on from that trial as I expected from his fitness and galloped very well on Monday morning too.

“It would make things a lot easier with an inside draw, but we’ll discuss the tactics with Vlad once the draw is out.

“The proof is in the pudding, and we’ll know more from his run this Saturday.”

Katak has drawn barrier eight. While he gets the chance to redeem himself, stablemate Pennywise, who ran second in the same trial as Katak and will line up in the same race, would be looking for back-to-back wins on the turf, albeit in a higher-rated race this time.

Tagged as a Polytrack specialist who has scored eight out of nine wins (over 1000m to 1800m) on the all-weather surface, the 2019 Group 3 Colonial Chief Stakes winner clinched his breakthrough win on turf in the Class 3 race (1800m) on Kranji Mile day.

Pennywise put up a good fight to nose out proven stayer Tangible then, but Le Grange was not surprised with his win given the six-year-old son of Pure Prize has turned in “decent” runs at his recent starts on the turf.

To him, the shedding of the “one-trick pony” tag might well mean bigger fish to fry for the Bernard Kantor-owned gelding.

“He’s actually been running some decent races on the turf and it all came together that day,” said the former right-hand man to ex-Kranji trainer Pat Shaw.

“I think the slow-run race helped him and the fact that we had a little bit of rain in the track did too.

“I’m happy with his trial too, though Katak trialled a little better than him, which should be the case since he’s the higher-class horse.

“2000m is the furthest he’s (Pennywise) ever gone, but he’s in good form, and this is the right time to try him and see how he goes over that.

“The win definitely gives me more options with Pennywise now. Touch wood, he’s a sound horse, but it looks like he’s just starting to understand what it is to be racing on the grass.

“So, the (Group 1 Singapore) Gold Cup (on November 19) is definitely possible.”

Incidentally, that win also handed jockey Bernardo Pinheiro his first win at his one-day visit to Singapore, but the Brazilian, who has since committed to a longer-riding stint at Kranji, will not be riding him this time.

“Bernardo cannot make the weight (52kgs), so (apprentice jockey) Krisna (Thangamani) will ride him,” he said.

Le Grange’s third runner in the race, Leatherhead, will also get a local rider on board for the same weight reasons.

The Helmet six-year-old ran second to Gold Star in a barrier trial with regular partner Jake Bayliss on Tuesday morning. However, with the lighter load (50.5kgs) on him this time, he will be ridden by apprentice jockey Yusoff Fadzli instead.

“He trialled well, and Yusoff will ride him. It’s the first time he’s riding for me,” said Le Grange, who has plans to leave for US for a two-week family vacation on July 20 and will only be back on August 3.

“I have three in one race, one topweight (Katak at 58kgs) and two lightweights, but I think all three are competitive and they should run well.

“A bit of rain during the week would be good because they all appreciate a bit of sting out of the ground.”