Winner of the Epsom Handicap over the same course and distance close on 12-months ago, the 5-year-old proved to be the least favoured of four Chris Waller runners in today’s seven-horse but came out on top after another outstanding Tommy Berry ride.

Put right on the speed in a relatively moderately run event, the under-rated son of Ocean Park was soon in control of the race when the field began the sprint for home.

First challenged by stable companion Imaging (GB) (Oasis Dream) soon after negotiating the Randwick rise, and then by fellow Chris Waller representative Star Of The Seas (NZ) (by Ocean Park) entering the final furlong, Kolding managed to hold off all rivals to score a very determined victory.

Star Of The Seas outlasted Imaging for second.

Sent to post the $2.20 favourite, Verry Elleegant (NZ) encounted all forms of traffic problems in the Randwick straight before finishing fourth — giving Chris Waller the first four placings in the race from as many starters.

Of the others, Dreamforce lead in his usual manner but ultimately proved to be the last horse across the line, while Avilius (GB) was ridden right out the back before making an eye catching run in the straight and then compounding over the closing stages.

Winner of the Golden Eagle late in 2019, Kolding took his earnings to a figure in excess of $5.5 million following his success in the time honoured George Main Stakes, though had only once placed in seven starts since the beginning of the year.

Speaking after the win, jockey Tommy Berry said that Kolding put the writing on the wall at his previous start when finishing runner-up in the Tramway, and that it was good to see him back in winning form.

“It was good to see him return to form the other day,” claimed Berry. “Dry tracks have been a big help to him.

“I think Chris [Waller] is just nursing him back to his best form.

“He’s usually better ridden with a bit of cover, but we found a race today where it was only going to end up one way, and that was him being outside Dreamforce. He switched off really well for me and [that] gave him the chance to finish strongly at the end.”

Berry added: “[It is] Just a great training effort and a tough effort by the horse. It felt like a mile would see him out — we had a pretty cruisy run there and on the line he was out of carrots. I’d say 1400-1500m is bang on for him.

“He’s an honest, tough horse and it’s just great to see him back in form.”

Winning trainer Chris Waller suggested that there had been genuine excuses for Kolding’s lack of winning form since last year’s Golden Eagle victory.

“Things haven’t gone his way,” claimed the trainer. “You can’t win these races if you aren’t right and we haven’t panicked. Just needed some fine tuning. That has been the main thing our team sticks to. We stick to plans, trying to let things unfold. The four of them went well.”

Waller went on to list a number of legimate reasons for Kolding’s barren spell, including the fact that “He doesn’t like the left-handed way of going”, “we went one run too far”, and “First-up was just too wet.”

Waller added that he didn’t see Kolding as an Epsom Handicap candidate as he would get “too much weight”.

Waller confided: “We’ll find a nice race for Kolding. Just got to work out his right distance. Follow the WFA path. Big query Melbourne tracks for him. I wouldn’t rule out Moonee Valley or Flemington. He certainly doesn’t like Caulfield.”

In regards to the disappointing George Main favourite Verry Elleegant, Waller said: “I’ve seen the race. She got bottled up on the fence… She got into a tricky spot.”

Waller also said that Verry Elleegant will be “stepping up to 2000m next time [and] will be fine.” 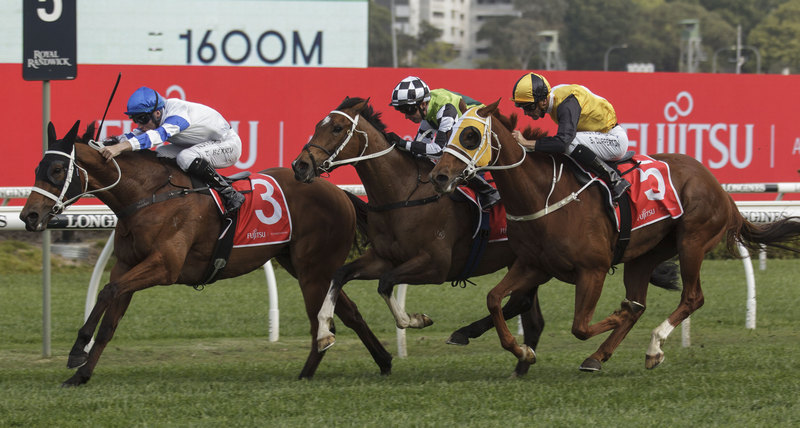 What the beaten jockeys said

Nash Rawiller (Dreamforce): “He came under pressure and jarred up really bad. He didn’t let go at all today. He never travelled well either. Wanted to lug off the track.”

Kerrin McEvoy (Imaging): “Good run. He will be cherry ripe for the Epsom now.”

Sam Clipperton (Star Of The Seas): “What else can I say about him. He’s a star. Just a bit stiff today.”

Rachel King (Colette): “Huge run. Just wants to get over a little further. She seems like she is back in form.”