Matt Cumani is running out of chances this season, but still firmly believes Khoekhoe is the horse that can provide him with a maiden Group 1 success as the colt prepares for his Queensland debut in Saturday’s Rough Habit Plate at Doomben.

The Group 3 contest will be a dress rehearsal for the Queensland Derby, where Cumani hopes it will be a case of fourth time lucky this season.

“We’ve had a bit of a frustrating year. We’ve run in three Derbys and finished second, third and fifth with three different horses,” Cumani points out. 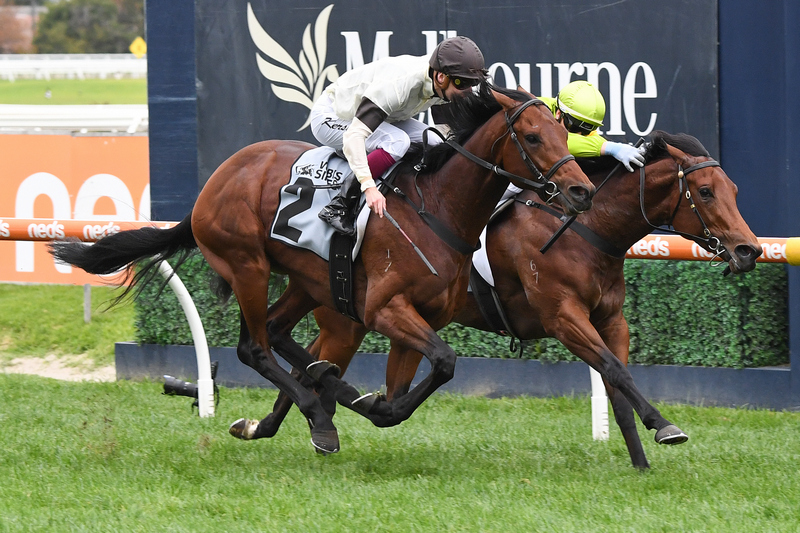 Khoekhoe will run in the Rough Habit en route to the Queensland Derby, picture Racing Photos

Khoekhoe’s contribution to that was a solid fifth in the Australian Derby behind Explosive Jack. He subsequently was ridden conservatively in the Packer Plate and failed to make any impact.

“His first two runs in Sydney were brilliant. There was no pace in those races and he ended up close to the lead, cruising when he turned for home, but being a target and getting chased down,” Cumani said.

“We were keen last start to ride him a bit quiet, but we were probably a bit aggressive in that action. He went to the back and the pace came out of the race, and [then] he got his tongue over the bit and it was a complete mess.”

Cumani said plenty of work has been done since to “patch that up a bit” and he was delighted with Khoekhoe’s work at Doomben on Tuesday morning where he partnered up with in-form older horse Hang Man.

“I was a little bit anxious going into this gallop,” he said, “(but) it was a great piece of work actually. I was delighted by it.

“Justin Huxtable is taking the ride and he came and galloped him and got on with the horse brilliantly. He got him to settle perfectly and seemed to understand him very well.

“Justin didn’t fight him and let him travel and it worked really well. He went with Hang Man and they went beautifully to the line. I thought it was a really good gallop.”

Khoekhoe gave Cumani and connections a big pay day when he took out the rich Showdown at Caulfield last April and he’s proven to be up to the country’s better three-year-olds this season, despite winning just once from eight starts.

“It sounds like he’s my favourite child, but he’s a horse we’ve always had a lot of faith in,” Cumani said. “I think he’s a very good horse. He’s just a bit juvenile the way he races and is making a couple of mistakes.

“I’m hoping as he gets older he gets more mature in his races and he irons out and we will see him for what he is. I’m hoping while he’s racing against three-year-olds only he can switch on and get it right in his next couple of runs.

“We’re knocking on the door of our first Group 1 and it would be great to get it. I’ve always thought Khoekhoe might be the one that gets it done for us.”