A career-best haul in Hong Kong remains within Karis Teetan’s grasp after the Mauritian posted a Happy Valley quartet on Thursday night to take his 2020/21 season tally beyond 50 wins – the fourth time in as many seasons he has achieved the half century.

Teetan’s four-timer – Vigor Champ, Keep You Warm, Manna From Heaven and Telecom Fighters – consolidated his grip on third place with 52 wins in the jockeys’ championship behind Joao Moreira (108) and Zac Purton (90), with Alexis Badel in fourth overall with 44. 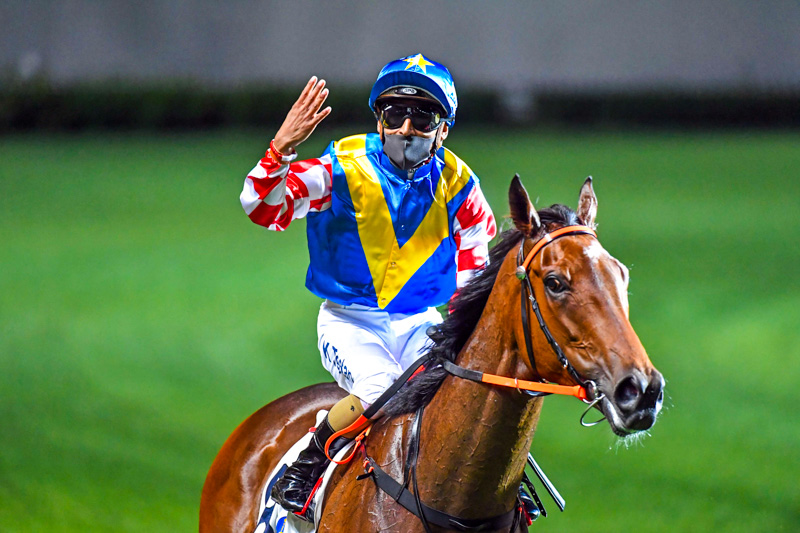 A remarkably consistent figure since arriving in Hong Kong for the 2013/14 season, Teetan has steadily improved his hauls across the past three terms, knocking up 52, 84 and 93 winners, respectively.

With 27 meetings left in the current term, the ‘Mauritian Magician’ has the opportunity to press for a career-high by season’s end.

“What a night. It turned out to be a great night for me,” Teetan beamed.

“You always come to the races and try to be positive, I thought I had some ok rides but I must say all the horses I rode tonight were all well prepared, my only concern was that some of them were drawn outside.

“I thought if I could overcome those draws, they could be competitive.

“I appreciate all the support I get from the owners and trainers.

“I’ve just been working very hard this season, sometimes things go up and down but you just have to keep going and keep working hard and try to ride winners.”

Teetan, who has ridden a total of 447 wins in Hong Kong, combined with Manfred Man and Manna From Heaven to land the Class 5 Moreton Handicap (1650m), the opening race of the fixture.

The 50th winner of the season was realised with Francis Lui’s Keep You Warm’s success in the Class 3 Cooper Handicap (1000m) for Lui, who was delighted with the Irish-bred gelding’s display.

“This horse is very fit and last start he was beaten by a good horse (Courier Wonder),” Lui said. “That (race) was at Sha Tin over 1200 metres and back at Happy Valley over 1000 metres suited him - when he was travelling around the bend he was able to take a breath and he was able to finish off.

“Hopefully he can take some confidence from that and win again.”

Teetan brought up his treble on Vigor Champ in the second section of the Class 4 Moorsom Handicap (1200m) for Ricky Yiu and then bookended the meeting on Telecom Fighters for Me Tsui in the Class 3 Henderson Handicap (1650m).

Vincent Ho and Francis Lui, famed by their glittering partnership with Golden Sixty, savoured the Class 2 Clementi Handicap (1000m) with Massive Pocket, who was produced with devastating timing by Ho to secure his fifth Hong Kong triumph from 27 starts.

Renowned for a blistering, abbreviated sprint, Ho tucked the Stratum gelding away on the fence before threading his way towards the outside of the field.

“He’s always loved a fast pace, he’s got a short turn of foot and he loves Happy Valley as well,” said Ho.

“The A track and the shorter straight suits him, he loves being held up and then sprinting hard.”

Frankie Lor is optimistic Superbella can continue to flourish after the gelding’s gap victory in the Class 4 Price Handicap (1800m) under Joao Moreira.

Driven to the lead in the home straight, the British import streaked clear to post a four and three quarter length victory despite covering ground to notch his first win in Hong Kong.

“Very strong win, the last two starts he was not really lucky,” Lor said. “This time, the distance was more suitable for him and tonight he was always on the outside, which suits him better.

“I think he goes up to Class 3 now and maybe we keep him here at Happy Valley for his next starts over 1800m.”

“It was a good, tough win,” Shinn said after posting his 15th win of the season. “He doesn’t have a sharp turn of foot, but he can just keep going. The way the race panned out was perfect.”

Hayes said: “The horse has done a really good job this season. We sent him to Conghua to freshen up and he appreciated having some room and it was a good win.”

Derek Leung capitalised on Chris So-trained Goodluck Goodluck’s inside draw as the Magic Albert gelding jumped cleanly from gate one before leading virtually all the way to snare the first section of the Class 4 Moorsom Handicap (1200m).

Ruan Maia continued to add impetus to his Hong Kong stint with a fourth win after Wine And Wine flew the start of the Class 3 Creasy Handicap (1200m) before defying his nine rivals for Benno Yung.