A late double at the Sale meeting transferred to Pakenham on Wednesday has provided Jamie Kah with her 1000th career victory.

The milestone came up aboard the Michael Moroney-trained Bermadez in the final race, the Evergreen Turf Handicap (1400m), after Kah had guided Kurabui to victory in the preceding race, the Schweppes Handicap (1400m).

Kah did not realise she was approaching the milestone until the mother of her fiancee Clayton Douglas informed her after the pair had combined for a double at Mornington on Tuesday.

“It’s pretty cool. It’s my ninth year of riding, so to notch that up is unbelievable,” Kah told broadcaster racing.com.

“Clayton’s mum told me yesterday. I had no idea, so it’s pretty special.

“You ride a couple of hundred winners in your career but you never think you’ll get to 1000.” 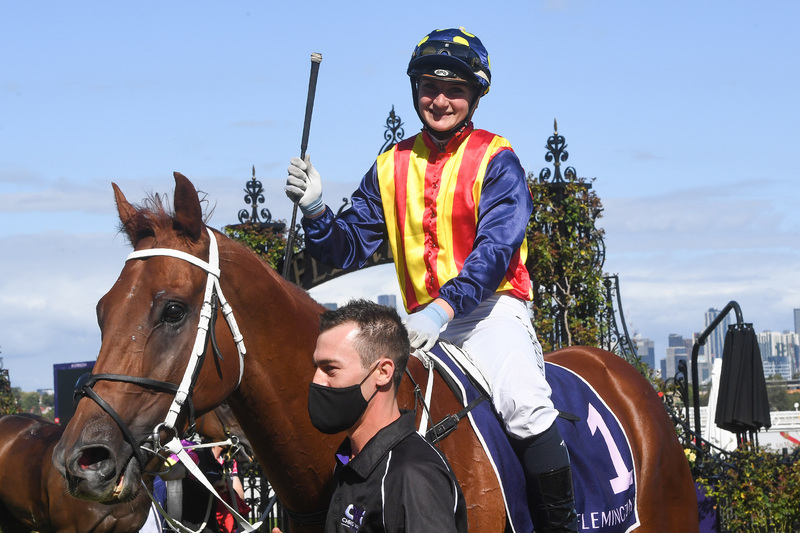 Kah said Bermadez, unbeaten in his two starts, made her work hard in order to get the son of Tavistock home to maintain his perfect record.

“He drew a sticky gate and we had to take our medicine and go back,” Kah said. “We got cover, but he’s still a raw horse. He wanted to lay in and do a bit wrong.

“Once he puts it together, he’ll be a smart horse.”

Kah leads the Melbourne Jockeys’ Premiership on 86 winners for the 2020-21 season and is poised to become the first jockey to top the 100-metropolitan mark in a season.

On Saturday, Kah will attempt to improve on her five Group 1 wins to date when she partners Instant Celebrity in The Goodwood at Morphettville.