Singapore racing fans woke up to the shocking news former Kranji-based Mauritian jockey Nooresh Juglall passed away following a horror race fall in his hometown of Mauritius on Saturday.

The reigning Mauritius champion jockey, former South African Jockey Academy graduate and two-time South African champion apprentice was riding at his third and final race of the first raceday back in Mauritius when his mount Rule The Night crashed heavily at the 600m of the Champ de Mars racecourse in the capital of Port Louis.

Incidentally, it was another Kranji jockey in Benny Woodworth who was aboard the horse who led to the accident. Golden Tractor, a horse who was having his first start in Mauritius, was seen skipping the road crossing at that point and stumbling badly, with Juglall unable to avoid the collision with Rule The Night, who was in last place and following right behind, clipping heels before coming down and bringing Golden Tractor (later euthanased due to a broken shoulder) down as well.

Nooresh Juglall being led out aboard Rule The Night a few minutes before tragedy struck (photo courtesy of Fantastic Light Images).

Woodworth was hurtled away from the saddle towards the outside rails of the last bend, which probably saved him from any more serious injury than a reported broken elbow, but Juglall was unfortunately less lucky.

He was immediately rushed to the nearest hospital, unconscious, and in a very critical condition. He was put on life support, but unfortunately, he didn’t survive his injuries a few hours later. Juglall, who was two months shy of his 30th birthday, died at 10.20pm Mauritius time (2.20am Singapore time).

The official causes of death are yet to be reported, but it is understood he sustained multiple injuries to his head, lungs and ribs. 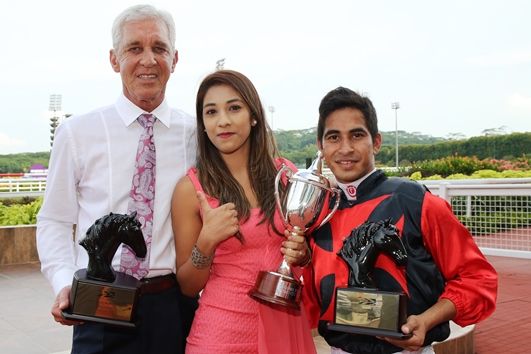 Juglall leaves behind wife Chaaya and two young boys Aryan and Ahaan, as well as his father Satanand, mother Kavita, sister Sweta and younger brother Tejash, who also trained at the SA Jockey Academy and rides on the Indian Ocean island.

The Mauritian-born Juglall grew up in the tiny village of Sainte Croix, and used to help his uncle water the Champ de Mars racecourse every evening from the age of 15. Preferring horses to books, he saw his dream of becoming a jockey come true when he left for South Africa with a poor command of English to join the SA Jockey Academy outside of Durban in 2008.

After his first professional ride on November 8, 2009, he rode his very first winner four months later, a pick-up ride on Shine The Gold for Roy Magner at Turffontein on March 16, 2010.

Four years later, with two South African champion apprentice jockey titles tucked away and about to come out of his time, Juglall secured a licence in Singapore. He went on to ride at Kranji for five successful years, establishing himself as a well sought-after lightweight jockey, riding mainly for Patrick Shaw, and subsequently Ricardo Le Grange when Shaw retired in 2016.

A virtual unknown hailing from a country most Singaporeans knew mostly as a postcard for beaches and holiday resorts (actually, most thought he was from South Africa, a misconception probably stemming from his previous career in the Rainbow Nation and the strong South African accent he had by then spoken his much-improved English in), Juglall will forever be remembered for hitting the jackpot at his very first ride, Majestic Moments – who was also at his racing debut – on June 15, 2014.

Juglall cut short his Singapore stint in April 2019, the main reason being the difficulties encountered in obtaining a resident visa for his wife. His last winning ride at Kranji was Reaching For The Sun for trainer Desmond Koh on February 8, 2019.

He returned to Mauritius to ride on a retainer for champion trainer Gilbert Rousset. He finished third at the first season before claiming the title the next year, beating another former Kranji acquaintance, Derreck David by one winner (31 versus 30).

In total, he has tallied up in excess of 500 winners across South Africa, Mauritius and Singapore. He also rode in Hong Kong at a short stint in 2016, but did not win any race. 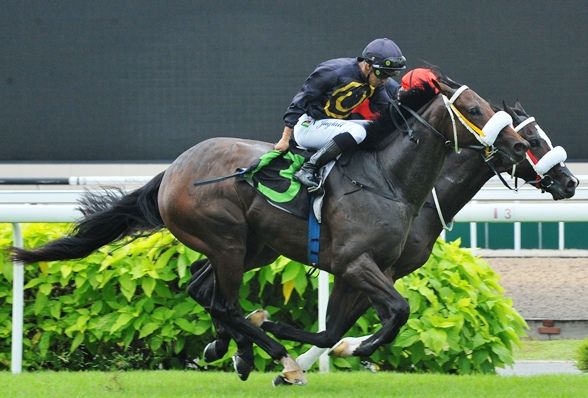 Le Grange was understandably devastated by the news, given he was the trainer who knew him the most at Kranji, not just as his stable jockey but also as a friend.

“Nooresh touched so many lives with his infectious smile and his good heart,” said the South African handler who took Juglall under his wings from Day 1.

“I was privileged to have known him. We have lost a good man, a father and a husband.

“Until we meet again, brother.”

Such are the vicissitudes of horse racing that Le Grange’s other stable jockey (at the same time as Juglall) Barend Vorster, who also left Kranji a few months before Juglall, just won his second Australian Group 1 race aboard longshot Savatoxl in the Goodwood at Morphettville on Saturday.

“One jockey won a Group 1 and the other was fighting for his life on the same day. I’m too numb to say anything now,” said Le Grange.

Another person who has known Juglall from his formative years in South Africa through his Singapore stint was former Singapore Turf Club racing commentator Gareth Pepper, a South African who now resides in Sydney.

“My dad rang me up this morning to tell me about Nooresh. I am shocked and devastated beyond words, we all are back home in South Africa where he had many friends among jockeys and trainers alike, he was like one of ours,” said Pepper.

“I still remember the first day he arrived in Singapore, fresh from the airport and straight to the races and he won at his only ride. What a flying start it was.

“He was such a good, good guy who never had a bad word about anyone. He will be sorely missed by all.

“I think I will go and have a drink on him now.”

On a personal note, as a fellow Mauritian, I have been close to Nooresh even before he landed here. I knew of him of course through his feats as an apprentice jockey in South Africa, namely his Triple Tiara on Cherry On The Top for the Oppenheimer family, but had never met him personally until I was introduced to him on a trip back to Mauritius in 2013.

What struck me immediately was, besides his instant amiability, it was his resolve, that I felt in that iron-grip handshake of someone who was very ambitious and determined to succeed in his chosen career.

Just about to become a senior jockey then, he expressed his desire to ride in Singapore, and being the racing reporter there, he approached me for some advice. I pointed him in the right direction and next thing I know he was plying his trade at Kranji the following year!

I would rate Nooresh as one of the best lightweight jockeys to have ridden at Kranji. He had great balance and was hard to topple in a driving finish, as we fondly remembered in that slog to the line in the 2017 Saas Fee Stakes when his horse Storm Troops looked like he would get beaten, but Nooresh, in his trademark South African riding style, rebalanced his tiring horse and somehow managed to extract that last drop of petrol left to lunge at the line and share the spoils with an equally determined Danny Beasley on War Affair.

Besides his talent, Nooresh was also a dedicated family man who loved his wife and two young sons to bits. Chaaya was often seen at Kranji on raceday, leading in her husband to many winning photos, but back in Mauritius, the whole family would attend the races as there are no age restrictions there.

He was also a very filial son, who often had his parents over in Singapore and at Kranji, but what I was most touched by was his devotion to his younger brother Tejash or Kishen as he is better known, how he dug into his own savings to finance his jockey’s training in South Africa.

Tejash is now a full-fledged jockey, and heartbreakingly, also rode at that first Mauritius meeting of a 2021 season long delayed by administrative issues and COVID-19. He was not in the race his brother fell, but later on, he had to replace Woodworth on his remaining ride in the last race.

As a professional writer, I would always give Nooresh the write-up he deserves in the most unbiased fashion, regardless of our common origins, but as a man, and outside the parameters of our work, you couldn’t help bond with him, be it at our weekly football games or over some friendly banter at the track.

He called me ‘mamu’ (Hindi for uncle), I called him ‘boss’. Till today, he still kept in touch with me via WhatsApp, and had always spoken of his desire to return to Kranji one day.

He had a great sense of humour and was always smiling, often seen tossing his goggles to the adoring crowd after a win, but I will also remember him as a very pious young man, who prayed daily to Hindu deities and, in case some haven’t noticed as his post-win signature, he would always look skywards to the heavens with the index finger pointed upwards on the way back to scales.

You are now in racing heaven, Nooresh, or Abhishek as he was often called at home. The whole racing world, especially in Mauritius, South Africa and Singapore, is in mourning, but nothing can begin to describe the pain your loved ones are going through now.

You were taken from us too soon, you will be sorely missed. Rest in peace, Nooresh.

On my behalf, and on behalf of the Singapore Turf Club, we would like to express our sincere condolences to the Juglall family and all his racing fans back home and here in Singapore.