Jonker runs his rivals ragged in the MM Snippets

The blistering natural speed of Jonker (by Spirit of Boom) proved much too rapid for a capacity field of brilliant sprinters to master when the 5-year-old entire led from start to finish in the $1m, IT’S LIVE! In Queensland Magic Millions Snippets (1200m) on the spectacular Gold Coast program in Queensland.

Taken straight to the lead by jockey Jim Byrne, Jonker basically kept ‘the pedal to the metal’ throughout the 1200-metre assignment and was still comfortably clear of his opposition when passing the Southport finishing post.

A brace of Godolphin runners managed to get closest to Jonkers on the line, 2018 Magic Millions 2YO Classic winner Exhilarates (by Snitzel) running home solidly for second ahead of Roheryn (by Lonhro) in third. 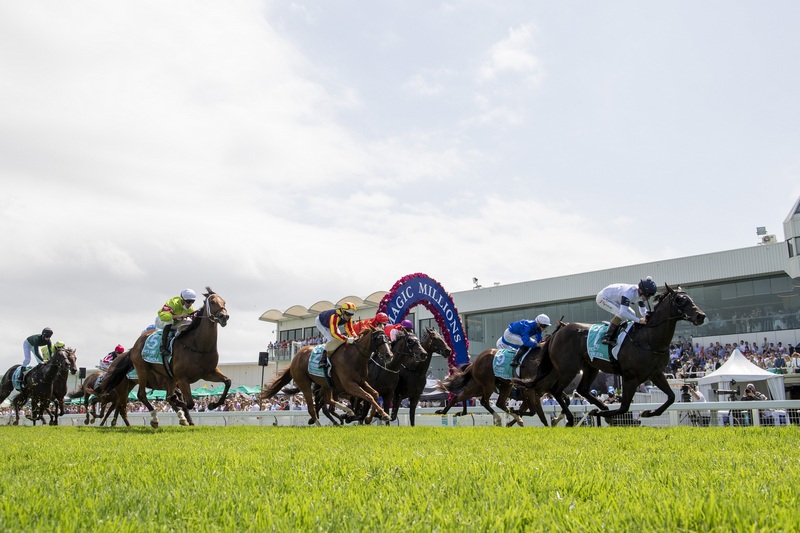 Winning trainer Tony Gollan said after the race: “I didn’t know what to expect when we got this horse to train. He obviously came in good shape and always had good ability.

“When he broke the track record at Doomben first run for me I knew we had a really serious horse, and I was so disappointed when he got beaten at his second run when shifting on the ground.”

Gollan then disclosed: “This was a real target race and everything I’ve asked the owners they’ve allowed me to do. He’s a really proper sprinter and he can go on and win a good race this year.”

In reference to the actual performance, Gollan observed: “They did make him do a bit of work early today, but he’s such a strong horse. He can really kick off a good speed.

“Jimmy tried to give him a breather but he didn’t come back for him that much. You’d swear at the furlong that he’s out of gas, but he just finds another gear late.”

Gollan then re-iterated, “I just think he’s got a good race in him this year. I really do.”

Speedy Jonker ran them off their legs in the @mmsnippets Sprint @GCTurfClub in a momentous win for @tonygollan who also trained his father Spirit Of Boom! pic.twitter.com/WlATIfqdF7