Even-money favourite Lucky Jinsha didn’t quite run like a surefire thing at Kranji on Saturday but still got the job done, much to his numerous backers’ relief in the end.

Backed off the map even though he was rising in grade off his last-start seven-length romp in Class 5 company three weeks ago, the son of Shooting To Win had to put in the hard yards when caught on a limb in a merciless speed battle three wide this time.

He did jump from an awkward barrier as well at his last outing, but was always on the bridle outside only one runner before he cakewalked in. 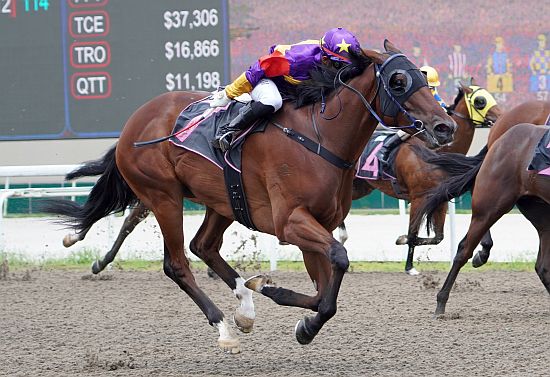 In Saturday’s $50,000 Class 4 Division 2 race over 1200m, Lucky Jinsha had one more runner to contend with on his inside, and contrary to the last start, apprentice jockey Hakim Kamaruddin looked like he was vying for the lead, but Headhunter (Shafiq Rizuan) and Royalty (Koh Teck Huat) stood their ground.

Those who were clutching their Lucky Jinsha ticket must have felt close to ripping it up when their pick suddenly drifted out under pressure upon straightening, leaving the coast clear for Jason Ong’s Special Ops (Danny Beasley) to power through.

Lucky Jinsha was doing his best work at the finish, though, clinging on to his lead by a neck from Special Ops. Ong’s second runner Royalty recorded his best run to-date with a third place another length away. The winning time was 1min 11.84secs for the 1200m on the Polytrack.

Being only four, Lucky Jinsha has a lot more scope for improvement, which Fitzsimmons is likely to direct towards longer trips in coming assignments.

“He’s a horse with plenty of upsides. He can go further and he can handle both turf and Polytrack,” said the in-form Australian trainer.

“It didn’t look really pretty today, though. He overraced a bit, I was hoping he’d be behind the two leaders (Headhunter and Royalty).

“And then he drifted out in the straight. It was a huge effort to hold on.

“The two horses on the inside wouldn’t let him cross. If not for that, he could have won by a bigger margin.

“I was really rapt with the way he has risen from Class 5 to Class 4, winning three and running second once in five starts. I don’t think I could have done any better with him.

“It’s great to win a race for the Lucky Unicorn Stable. Let’s hope they can support me with a few more horses.”

With that third success, Lucky Jinsha has seen his bank account bulge past the $65,000 mark for the Hong Kong-based outfit run by Mr Leung Kai Fai, who also races the likes of Ocean Crossing and King Zoustar, and not too long ago, big-race stalwart Fantastic Owners with ex-Kranji trainer Brian Dean, but is probably better known back home for his champion horse and stallion Lucky Owners, winner of the Group 1 Hong Kong Mile in 2003.