Jerlyn Seow living her dream On The Track

Watching a television drama about horse racing back in primary school was the earliest impression Jerlyn Seow Poh Hui had of jockeys and horses, but little did the newly-licenced apprentice jockey know racing would take centre stage in her life one day.

The animal lover wanted to become a vet after her O-levels, but had to switch to a Diploma in Product Design and Innovation at Ngee Ann Polytechnic instead as her results were not good enough.

The 27-year-old Singaporean worked full-time at Ah B café, a dogs’ cafe for about two years after graduation, while helping out at her parents’ yong tau foo stall in the mornings at a wet market in Jurong West.

As Seow's love and passion for working with animals grew, she went searching online and stumbled upon a job opportunity at the stable, and she has not looked back since. 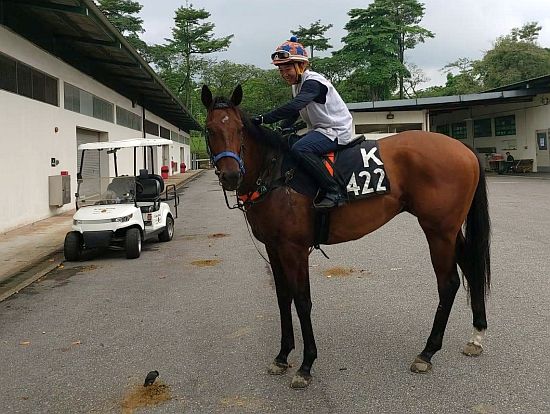 “None of my family or friends are in the racing industry,” said Seow, who lives in a HDB flat at Canberra with 32-year-old husband Clifford Lum along with five cats and one dog.

“The first time I saw horse racing was on TV with my siblings. It’s a Hong Kong drama about apprentice jockeys, called ‘On The Track or Off’.

“I don’t remember much about it now, but I found it interesting. While working at Ah B café, I looked up online for jobs at the stables and at first, I thought I could work part-time as a syce, but I was told it was not possible.

“I called Singapore Turf Club again after that, and they recommended I worked at Leslie Khoo’s stable at the end of December 2014 as a full-time staff. I was very excited and my ex-boss also encouraged me.”

Yet, the path down one’s dream is more often than not, never smooth-sailing. The first bump Seow took came when she was dropped out three months into a six month-long track riding course at Singapore Training Academy for Racing (STAR) in 2016.

Though discouraged, she pressed on. Senior track rider Mick Lockett then recommended her to Australian trainer Steven Burridge for a job as a syce and track rider in 2017.

It was on top of starter hacks that Seow first learned how to ride under the tutelage of two other track riders, former jockey Richard Lim and Shankar.

All went well, but when she had a fall and injured her ankle, her worried parents decided that was not a job for their daughter.

“It was raining heavily that day, and while I was trying to get a leg-up on a horse, he suddenly took off and I landed awkwardly on the floor,” recalled Seow.

“I hurt my ankle and was sidelined for three months. Then, I returned to work as a syce for six months before I could ride again.

“My husband (then-boyfriend) and siblings (one elder brother and sister) were okay, but my parents got worried because of that injury and objected that I continued.

“I also felt like giving up many times, and yes, there’s that fear of falling off from a horse, but that’s part and parcel of life as a jockey.

“It took me some time to reassure them that I can take care of myself around horses. They have never been to the track but they actually got very excited when they saw me in the trial videos ever since I went over to (current boss) Mark Walker’s stable.”

The three-time Singapore champion trainer does have a bigger fleet of horses in his barn, and the addition of Seow to the Kiwi’s roster 2018 was very much welcomed. Her exposure and experience in horse-riding increased a lot, especially during the COVID-19 Circuit Breaker, a testing time for the stable due to the lack of manpower, as well as her own physical stamina.

“My boss is very supportive of me. I have a lot of opportunities to ride horses in trackwork and barrier trials. I have ridden in 86 trials as of today,” said Seow who rode three of Walker’s horses (Man Of Mystery, Altair and Just Landed) on Tuesday morning.

“Usually, we ride six to seven horses a day for trackwork, but from about February onwards till July or so, CK (Ng Choon Kiat), Hakim (Hakim Kamaruddin) and I had to ride about 12 to 17 horses each in the morning!

“The situation improved only when cross-border travels were allowed again between Malaysia and Singapore, so staff could come back to work.

“Being a jockey means you need to have the basic fitness, strength and stamina. I used to go to gyms to exercise besides riding horses, but now I work out at home a few days a week as well.

Jockeys have one of the most physically demanding jobs in the world, so it is common to see predominantly male jockeys around, though there’s no lack of world-class female riders.

Melbourne Cup-winning jockey Michelle Payne (Prince Of Penzance in 2015) comes to mind. Other than Collett, fellow New Zealander and New Zealand champion jockey Lisa Allpress is among the last professional lady riders to have ridden at Kranji (2013 to 2014).

Last year, Jessica Eaton was the first to start a training exchange from Racing Victoria.

Despite the challenge and the uncertainty of racing amid the COVID-19 pandemic, Seow has never regretted her decision to become a jockey.

“I know it is not easy. To me, females have to work doubly hard as we are not physically as strong as guys,” said the petite lass who rides at 49 to 50kgs.

“However, I am thankful for the advice given by my male colleagues like Hakim, CK, MM Firdaus, Zawari (Razali) and our champion apprentice Simon (Kok), as well as Richard (Lim), Shankar, Gus (Clutterbuck, Walker’s assistant-trainer) and Matt (Pumpa, apprentice jockey coach).

“I like the riding styles of Michael Rodd, Benny Woodworth, Marc Lerner and Juan Paul van der Merwe). I look up to them.

“Michelle Payne also inspires me with her achievements. It would be good to have the chance to go overseas and ride one day, but I’m not thinking about that now.

“I am already overjoyed and grateful to get my apprentice licence to ride next season. There are already fewer races since racing resumed, so I hope to start off slowly and get enough rides that can help me improve on my riding skills.”