Thursday’s seven-race, $1,355,000 Dubai World Cup Carnival meeting is sponsored by pillar partner Al Tayer Motors and features a stakes-heavy, star-studded line-up. Four group stakes will be contested and a trio of handicaps that will surely have bearing on the upcoming Super Saturday and Dubai World Cup meetings.

The top-rated horse trained in Dubai will make his local debut when Godolphin’s Charlie Appleby-conditioned Ghaiyyath breaks from the outside post six under William Buick in the 2000m Dubai Millennium, named after the iconic Dubai World Cup sponsored by Emirates Airline winner. A son of two classic winners, Ghaiyyath is unraced since finishing unplaced in the Prix de l’Arc de Triomphe (G1) and was a devastating 14-length victor in German G1 company prior to that. A return to that level of performance makes him much the best in this spot, but his conditioner—winner of three of the past four renewals—has laid the caveat that the main goal is the $6 million Longines Dubai Sheema Classic (G1) in five weeks’ time.

One of three G1 winners in the race, he is joined by Desert Encounter, trained by David Simcock, and Saeed bin Suroor-conditioned Royal Meeting. The former will surely need the race, but ended 2019 in career-best form, winning four consecutive races, including a second Canadian International (G1) at Woodbine over 2400m. Among his victories was a tally over this distance in G3 company. Royal Meeting, on the other hand, has yet to race beyond 1600m and will get a class and stamina test here. Jim Crowley rides the former from post five, while Pat Cosgrave will be on the latter from the rail.

Certain Lad tied the course record for this 2000m trip two races back and appears to be in top form for trainer Mick Channon. Ben Curtis flies back in from England for the mount. Meanwhile, defending champion Spotify takes on an emphatically tougher field this year for Appleby, but will have James Doyle once again in the saddle when he breaks from barrier two. Norwegian Derby winner Privilegiado, a winner of six of 11 for Niels Petersen, gets a rider switch to Dane O’Neill after a poor showing two weeks ago over 1800m. More of a stayer, he will appreciate the extra ground.

Past winners of the Dubai Millennium include standouts Zarak and Hunter’s Light, who set the course record (2:00.67) in this race in 2015. Both were rated 116 going into their races, the highest-rated to compete in the race until this year. Ghaiyyath carries a massive 126 mark, making him one of the top-rated horses in the world.

The first edition of the 1600m turf handicap features 14 horses from a variety of backgrounds, but the class appears to lean on Godolphin’s 2019 and 2020 DWC Carnival winner Major Partnership and top-weighted Masaarr, who makes his first start since February 2019 for trainer Nicholas Bachalard. The most intriguing runner is arguably Seniority, who was previously in the care of William Haggas and raced in the colours of The Queen, but is now property of Nasir Askar and trained at Satish Seemar’s Zabeel Racing Stables. The chestnut returns to the turf after a poor showing on the Jebel Ali dirt on seasonal debut.

David O’Meara-trained Firmament, Charlie Appleby-conditioned Good Fortune and Doug Watson pupil Motafaawit appear to have claims in this spot, as well. The last named is owned by HH Sheikh Hamdan bin Rashid Al Maktoum, who has three in the race. His top jockey, Jim Crowley, chose Moqtarreb, who is well-handicapped here with 55kgs (five less than Masaarr) and would contend for top honours if he returns to the form that saw him finish less than a length astern G1 winner Suedois two starts back.

Adding some wasabi to this year’s six-piece rainbow roll of nations is well-bred Japanese filly Serein, who shipped in early for the same Koji Maeda (owner), Mikio Matsunaga (trainer) and Yutake Take (jockey) team that landed the 2016 UAE Derby with Lani. The dark bay daughter of Uncle Mo and G1 winner Tiz Miz Sue was purchased at Keeneland September 2018 for $500,000 and is coming off a tenacious win over 1800m in the Kuratake Sho at Nakayama against males. Her presence could be a sign of the times, as her homeland is reportedly preparing a team of 15-20 horses for Dubai World Cup night next month. Connections are hoping to use the UAE Oaks as a springboard to the UAE Derby and then $1.25 million Kentucky Oaks (G1) at Churchill Downs. Take rides from post two. NOTES: Team Serein talks about the exciting filly.

Scandinavia has made itself known over the past two DWC Carnivals and two Norwegian fillies must be respected on the distance stretch-out in Niels Petersen-trained Ascot Brass and Careless Whisper. While the latter is a maiden whose prospects would require faith, the former acquitted herself well on local debut when fifth in the Guineas, while owning four victories of her own back home. Norwegian jockey William Buick rides Ascot Brass from the rail, while Carlos Lopez will hope Careless Whisper’s guilty feet have got a winning rhythm from post four.

Godolphin homebred Dubai Love is a deserving favourite in this spot off an impressive win in the Guineas. The daughter of Night of Thunder has won twice in four lifetime starts and never finished worse than fourth. Conditioner Saeed bin Suroor has won 10 of 19 editions of the G3 UAE Oaks, but if he wins an 11th time, he will have to do so by defeating a half-sister 2016 Oaks winner Polar River, Salem bin Ghadayer-trained Down on da Bayou. A smart second in the Guineas after setting a strong pace, the daughter of Super Saver appears primed to improve. Pat Cosgrave has the return call on Dubai Love from post five, while Down on da Bayou breaks from the outside post six under Mickael Barzalona.

Doug Watson-trained Tapi Sioux completes the field and will need to improve off of her third-place finish in the Lincoln Continental maiden over 1600m to be competitive, but was franked when the two males who beat her that day, Emblem Storm and Lake Causeway, came back to finish third and fourth in the UAE 2000 Guineas (G3) two weeks ago. NOTES: Watson discusses the progress of well-regarded Tapi Sioux.

Seven competitors will contest the 1600m Zabeel Mile (G2), topped in rating by last year’s winner, Mythical Magic, who has earned the loyalty once again of William Buick. The Godolphin-owned, Charlie Appleby-trained gelding ran second in the Al Fahidi Fort (G2)—as he did in 2019—following a six-month break after running 13th of 15 in the Queen Anne Stakes (G1) at Royal Ascot.
Chief competition in the seven-horse field appears to be stablemate Zakouski, who will be ridden by James Doyle from just inside him in post one. The 4-year-old lightly raced son of Shamardal is 2-for-3 lifetime and was superb when landing the 1600m Longines Conquest Classic Handicap on Jan. 9 in a swift 1:35.90 and boosting his rating from 100 to 109. .

Godolphin’s Saeed bin Suroor-trained Dream Castle returned to form last out in the Al Rashidiya (G2), finishing a fine second behind fellow G1 winner Barney Roy and improving greatly from a series of poor performances. Last season, the son of Frankel swept all three of Meydan’s 1800m preps for the $6 million Dubai Turf sponsored by DP World (G1) before finishing a disappointing 13th in the big race. Shortening in trip could be the foundation needed for Dream Castle to build back into reality when Christophe Soumillon rides from post seven.

“He ran much better last time and is in good shape at home,” Bin Suroor said. “It looks a tough race, but we are happy with him.” 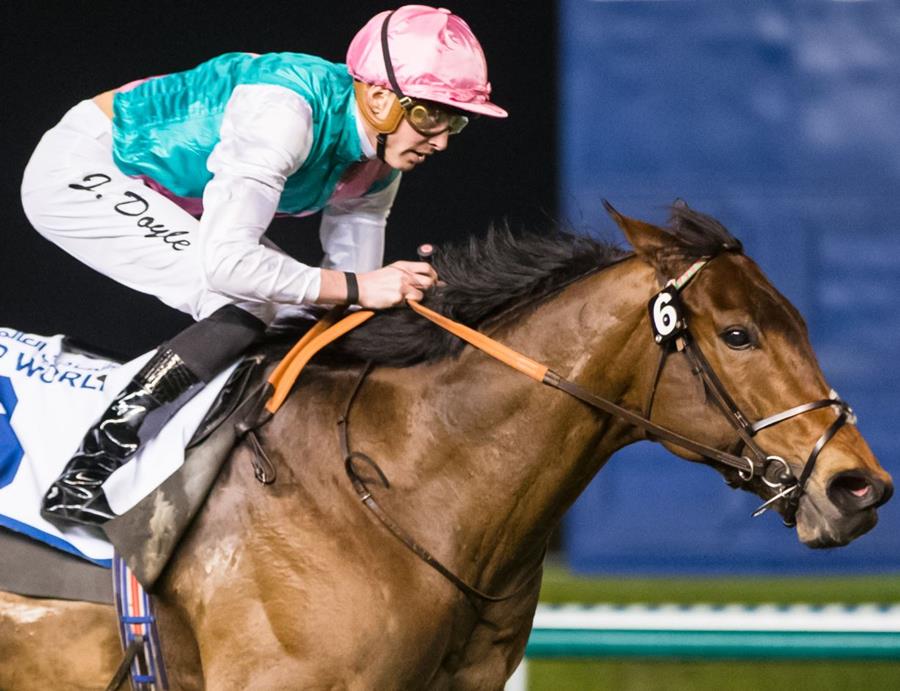 A field of 10 will assemble at the starting gate on Thursday to prove themselves at the Group 2 level in the 1000m Meydan Sprint, a race that has been a steppingstone for $2 million Al Quoz Sprint sponsored by Azizi Developments (G1) winners Shea Shea and Blue Point. Charlie Hills-trained favourite Equilateral is squarely the one to beat in this 10-horse field and carries a top rating of 112. A Juddmonte Farms homebred, he manhandled the $175,000 Dubai Dash (Listed) four weeks ago over this course and distance and has the return services of James Doyle from post five.

Finishing second that day was Waady, who returned last week over this distance to win in handicap company for trainer Doug Watson. Owned by HH Sheikh Hamdan bin Rashid Al Maktoum, he will be ridden by said owner’s top jockey Jim Crowley from post six and appears one of the bigger threats to Equilateral if he thrives on racing three times in a four-week span.

Only rated three points behind Equilateral is Doug O’Neill-trained Blitzkrieg, who represents the American DWC Carnival crew. A Grade 3 winner, he was a good second over 1200m last out in the $175,000 Dubai Sprint (Listed) and may have found his local niche in sprinting. William Buick picks up the mount from post two on the R3 Racing and Calara Farms-owned charge. In the Dubai Sprint, he beat Group 3-placed Angel Alexander, who returns here under Richard Kingscote (post eight) for trainer Tom Dascombe.
Mazzini resurfaces after a long layoff that dates back to an 11th in the Al Quoz Sprint, but has a pair of 1200m wins over this course last year, including one over this distance when defeating Group 3 winner Hit the Bid. The Fawzi Nass trainee overcame a bout of colic last summer, which delayed his preparation. Adrie de Vries rides from the advantageous outside post 10.

Over 1400m, the dirt handicap of the evening features a compelling field of eight with five countries represented and topped in ratings by French-trained sprinter Tour to Paris (104). The Pia Brandt trainee exits a pair of disappointing efforts this DWC Carnival, so it seems likely that locally based Doug Watson trainee Midnight Sands will capture the public’s attention here, as he puts his four-win streak on the line and tries to throw his hat into the ring for the Group 2 $1.5 million Godolphin Mile sponsored by Mohammed bin Rashid Al Maktoum City—District One.

Macau sprinter-miler Fasuba and American turf miler Ocean Fury try the niche 1400m dirt trip for the first time, while the Satish Seemar-trained stakes-placed duo of All Out Blitz and Behavioral Bias must be respected and are very well-handicapped in this spot.

Meanwhile, Swedish longshot Master Blaster returns to a distance more to his liking for trainer Susanne Berneklint, who already has a victory with an overlooked type during this DWC Carnival. South African G1 winner Al Sahem is entered to make his first start since March 2018, racing for new owner-trainer Rashed Bouresly.

The nightcap handicap is the second division of the popular 1600m turf handicap and is topped by Godolphin’s Land of Legends, who was an unlucky second last out to Zabeel Mile (G2) runner Salute the Soldier at this equivalent level. Picking up half a kilo as the top-rated (105) in this race, the Saeed bin Suroor-trained three-time winner’s likely main competition comes from Simon Crisford-trained Epic Hero and the HH Sheikh Hamdan bin Rashid Al Maktoum-owned duo of Tashweeq and Fanaar. All in all, though, this field of 15 could arguably comprise the most wide-open race of the card.